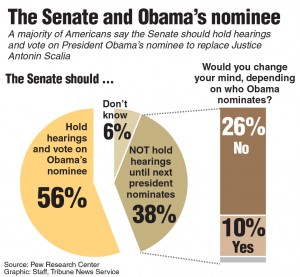 A majority of Americans believe the Senate should hold hearings and vote on whomever President Barack Obama nominates for the Supreme Court, according to a new poll.

The survey, by the nonpartisan Pew Research Center, found that 56 percent said the Senate should hold hearings and vote.

A minority, 38 percent, supported the position taken by Senate Majority Leader Mitch McConnell (R-Ky.), after the death of Supreme Court Justice Antonin Scalia — that the Senate should not act until after the next president takes office.

Independents favored the Democratic side of the argument, 56 percent to 37 percent, the poll found.

The survey also found Americans paying considerably more attention to the high court vacancy than to previous openings on the court.

Republicans and Democrats were about equally likely to see the choice as important. Independents were less likely to do so.