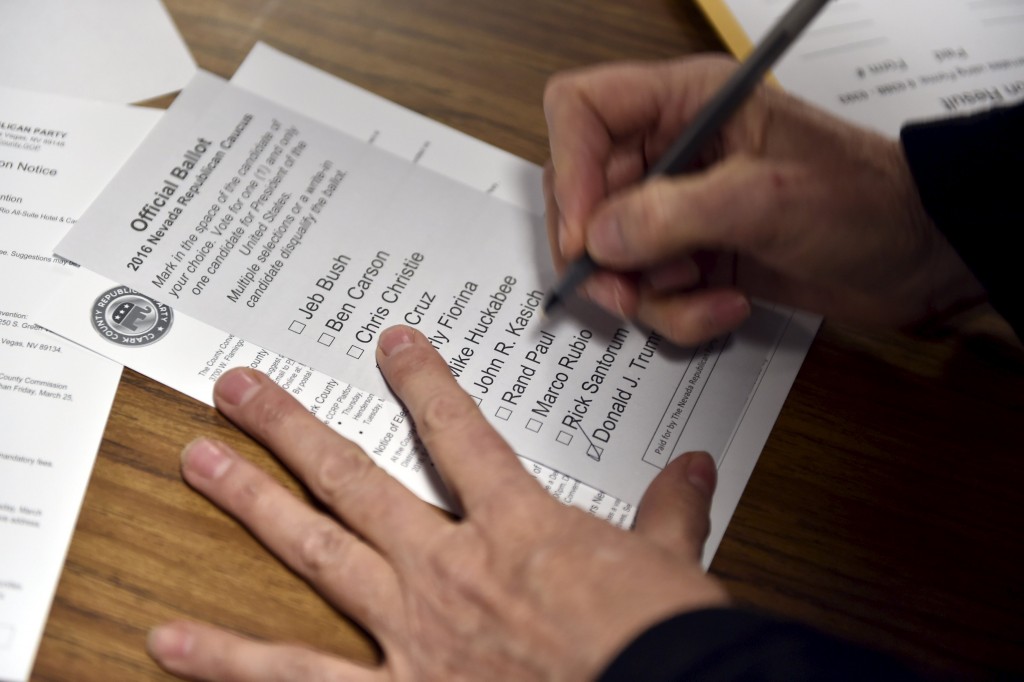 Notching three in a row, Donald Trump decisively won Nevada’s Republican caucuses Tuesday as Marco Rubio bid to elbow out Ted Cruz for second place in an increasingly urgent effort to slam the brakes on the Trump juggernaut.

Trump now can claim victories in the West, the South and Northeast – a testament to his broad appeal among the voters making their voices heard in the 2016 presidential race. His rivals are running out of time to stop him.

Ticking off a list of upcoming primary states where he’s leading in preference polls, Trump predicted he’ll soon be able to claim the GOP nomination. “It’s going to be an amazing two months,” he told a raucous crowd. “We might not even need the two months, folks, to be honest.”

Entrance polls captured the sentiment propelling Trump’s insurgent campaign: Six in 10 caucus goers said they were angry with the way the government is working, and Trump got about half of them.

With time running out, Nevada was a critical test for Rubio and Cruz, the two senators battling to emerge as the clear alternative to the GOP front-runner. Rubio was out to prove he can build on recent momentum, while Cruz was looking for a spark to help him recover from a particularly rocky stretch in his campaign.

Lagging far behind the two senators in the Nevada vote were Ohio Gov. John Kasich and retired neurosurgeon Ben Carson.

Rubio, already campaigning in Michigan as caucus results rolled in, sought to project confidence that he can consolidate the non-Trump voters who have been splintering among an assortment of GOP candidates, saying “we have incredible room to grow.” But after finishing third in Iowa, fifth in New Hampshire and second in South Carolina, Rubio needs a win soon to support the idea that he can beat Trump.

Cruz, a fiery conservative popular among voters on the GOP’s right, finished a disappointing third in South Carolina after spending much of the past two weeks denying charges of dishonest campaign tactics and defending his integrity. Another disappointing finish in Nevada would raise new questions about his viability heading into a crucial batch of Super Tuesday states on March 1.

In a more muted address across town, Cruz gave Trump his due for winning in Nevada and then pressed the argument that he’s the only candidate who can stop the billionaire businessman.

Harking back to his own win in Iowa’s leadoff caucuses, Cruz told supporters “the only campaign that has defeated Donald Trump is this campaign.”

Then, looking for opportunities that lie ahead in his home state of Texas and elsewhere, he added: “One week from today will be the most important night of this campaign: Super Tuesday.”

The election calendar suggests that if Trump’s rivals don’t slow him by mid-March, they may not ever. Trump swept all of South Carolina’s 50 delegates, giving him a total of 67 compared to Cruz and Rubio who have 11 and 10, respectively. There were 30 delegates at stake in Nevada, and a whopping 595 available one week later on Super Tuesday.

Trump, in his victory speech, dismissed the notion that if more GOP candidates drop out of the race, they’ll coalesce around an alternative. “They keep forgetting that when people drop out, we’re going to get a lot of votes,” he said.

Nevada’s caucusing played out in schools, community centers, and places of worship across the state – a process that’s been chaotic in the past.

Trump – no surprise here – was supported by nearly 9 in 10 of the “tell it like it is” voters.

The entrance poll survey was conducted for The Associated Press and the media networks by Edison Research as Republican voters arrived at 25 randomly selected caucus sites in Nevada.