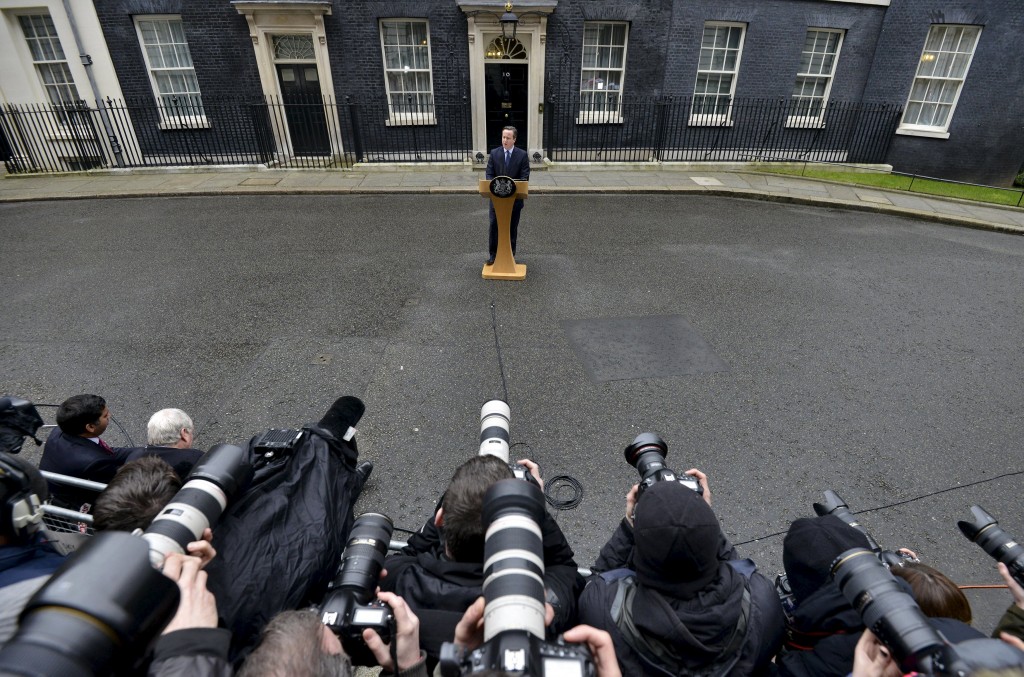 British Prime Minister David Cameron on Saturday called a June 23 referendum on membership of the European Union that could have far-reaching consequences for Britain’s unity and for the viability of the world’s biggest trading bloc.

Forty-three years after Britain joined the EU’s predecessor, Cameron clinched a deal from 27 other leaders to give it what he said was a special status before presenting the new settlement to senior ministers in London.

In the first British cabinet meeting on a Saturday since the 1982 Falklands War, Cameron said he had won the blessing of his colleagues to recommend to voters that Britain stay in the bloc it joined in 1973.

“Britain will be safer, stronger and better off by remaining in a reformed European Union,” Cameron, 49, said outside his Number 10 Downing Street residence in London, kicking off a four-month referendum campaign.

“Leaving Europe would threaten our economic and our national security,” Cameron said, adding that he would propose to parliament that the referendum be held on Thursday, June 23.

Britain has been divided over its European destiny since France and West Germany sought closer unity to prevent a repeat of the destruction wrought by World War II, and although Britain eventually joined the club, it remained a reluctant member outside the core euro zone.

Polls suggest about a fifth of voters are undecided, though betting odds have moved further in favor of Britain remaining a member since Cameron’s summit deal in Brussels.

A British exit from the EU would rock the Union – already shaken by differences over migration and the future of the euro zone – by ripping away its second-largest economy, one of its top two military powers and by far its richest financial center.

Pro-Europeans, including former prime ministers Tony Blair and John Major, have warned that an exit could also trigger the break-up of the United Kingdom by prompting another Scottish independence vote if England pulled Scotland out of the EU.

Companies such as BP and GlaxoSmithKline have cautioned that Britain’s $2.9 trillion economy would face years of uncertain negotiations if voters chose to divorce, while Goldman Sachs said the sterling could fall by as much as a fifth.

Members of Britain’s split ‘Out’ campaign say such warnings are overblown and that Britain would prosper if it broke free from what they say is a doomed German-dominated bloc that punches way below its weight beside rivals such as Russian President Vladimir Putin.

The agreement Cameron reached in Brussels granted Britain an explicit exemption from the founding goal of “ever closer union,” offered concessions on the welfare rights of migrant workers, and safeguards for the City of London.

After the deal, Cameron said he would campaign heart and soul for membership, but Nigel Farage, the head of the U.K. Independence Party, said he had achieved nothing.

“This is a truly pathetic deal,” Farage said.

One of Cameron’s closest political allies, Justice Secretary Michael Gove, and five other cabinet members opposed the deal and said they would campaign to leave. They signed a poster for the “Vote Leave” campaign, saying, “Let’s take back control.”

“The EU is an institution rooted in the past,” Gove said, adding that Britain had exported a democratic system of self-government to nations like the United States, India, Canada and Australia that had brought prosperity and peace to millions.

“Our country would be freer, fairer and better off outside the EU,” he said.

While a rebellion by six out of 30 cabinet members illustrated the depth of the party’s split over Europe, Cameron’s most senior ministers, including Interior Minister Theresa May and Finance Minister George Osborne, backed EU membership.

Despite a 1975 referendum in favor of membership, the issue of Europe has divided the Conservatives for three decades and played a major part in the downfall of Cameron’s two Conservative predecessors, Margaret Thatcher and John Major.

The EU inflames such passions that Cameron warned in 2006 that the party had to stop “banging on” about Europe.

But less than seven years later, under pressure from lawmakers who feared the electoral success of the anti-EU U.K. Independence Party, Cameron promised a referendum on membership.