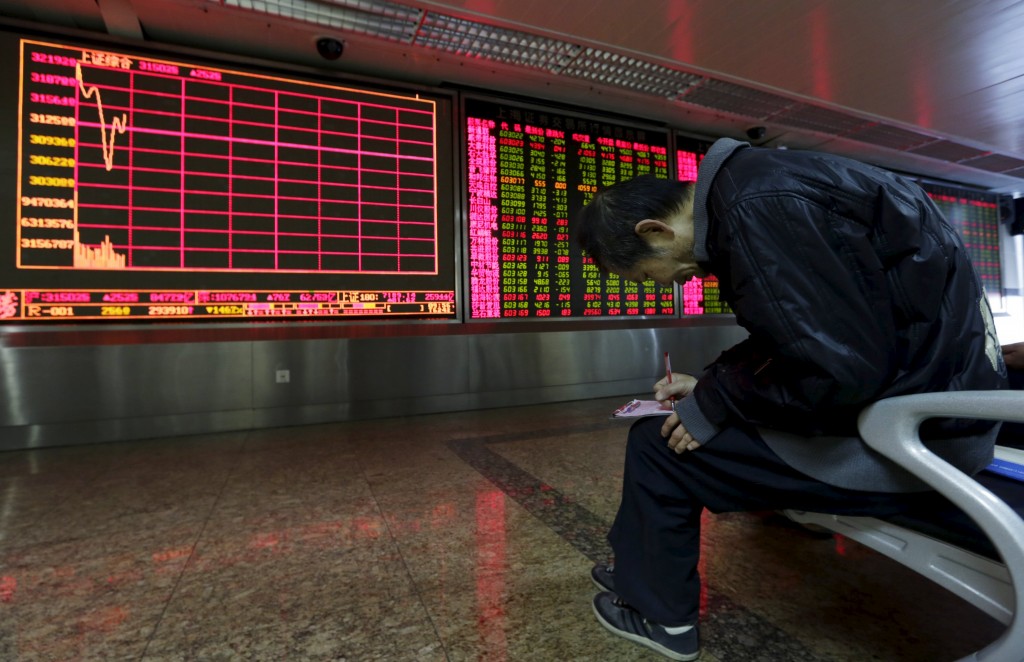 Asian shares slipped on Wednesday after two sessions of solid gains, while oil prices swung higher as the market reconsidered the chances of a meaningful deal to restrict supply later in the year.

The mood was still skittish – when China set a slightly lower guidance rate for its yuan, the yen and safe-haven bonds got an instant boost. As investors realised this was not some message from Beijing on devaluation, the moves quickly reversed.

European shares are expected to extend their rally, however, with spread betters calling for a rise of 0.6 percent in Britain’s FTSE and gains of 0.5 percent each in Germany’s DAX and France’s CAC 40.

MSCI’s broadest index of Asia-Pacific shares outside Japan lost 0.6 percent, reversing early gains of 0.4 percent, as its bear market rally petered out after a 3 percent rise over the previous two sessions.

The Shanghai Composite Index slid 0.3 percent and South Korea 0.1 percent. Japan’s Nikkei fell 1.7 percent, but is still up more than 5 percent on the week.

“The rally itself has been extraordinary but very thin and the failure of the yen to continue on the fairly steady path of weakening we’ve seen in the past couple of days has been reflected as nervousness in the Nikkei,” said Stefan Worrall, Director of Japan Equity Sales at Credit Suisse. “It’s been a very volatile two weeks and nerves are still frayed despite the fact that we’re off the bottom of those extreme sessions we saw last week.”

E-Mini futures for the S&P 500 also slipped 0.1 percent in Asia after Wall Street appeared to have broken its negative feedback loop with oil.

A survey of global fund managers found they had become so cautious they were holding more cash than at any time since late 2001, an “unambiguous buy” signal according to Bank of America Merrill Lynch.

In commodity markets, oil was whipsawed after top exporters, Russia and Saudi Arabia, agreed to freeze output levels but said the deal was contingent on other producers joining in.

“Albeit mostly symbolic, it is one of the first clear acknowledgements by the oil heavyweights that all is not entirely well in the current price environment,” wrote Helima Croft, global head of commodity strategy at RBC Capital Markets. “Additionally it signals a potential willingness to be more proactive later in the year. It puts the ball back in the court of those who would not or could not comply.”

Markets now await minutes of the Federal Reserve’s last meeting to judge the balance of opinion among policymakers on the prospect of further rate hikes.

Boston Fed President Eric Rosengren certainly sounded in no hurry to tighten. Speaking late on Tuesday, Rosengren said the Fed would need to ratchet down economic forecasts it made in December because of the uncertain global outlook.

Doubts about the pace of any further hikes kept the U.S. dollar restrained at 96.720 against a basket of currencies. It slipped against the yen to 113.73 yen, though it has support around 113.60.

The big loser was sterling, which has struggled so far in 2016 because of worries the U.K. might leave the euro zone.

Traders said U.K. markets face a pivotal week ahead of a two-day summit starting on Thursday at which Prime Minister David Cameron will try to persuade other leaders to support a deal to keep Britain in the European Union.

Sterling was stuck at $1.4290, having shed 1 percent against the dollar on Tuesday.