Business U.S. Stocks Rise for the Second Day in a Row
Business

Stocks closed broadly higher as the market notched its second sizable gain in a row. Retail and industrial stocks made the biggest gains as they were lifted by company earnings, some good news from China’s economy, and hope that Japan’s struggling economy will get another boost.

Indexes were higher all day and almost matched the big gains they made on Friday. Strong quarterly results gave some company stocks a boost and investors worried a bit less about China and Japan. 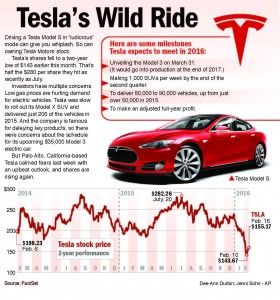 For a change, stocks traded higher even though the price of oil slumped. Investors were skeptical that OPEC nations will sign off on a deal to freeze production, so U.S. crude sank after a big rally on Friday.

The S&P 500 had climbed 2 percent on Friday. It had been two months since the S&P 500 rose at least 1 percent for two consecutive days. The U.S. market was closed Monday for the Presidents Day holiday.

Hospital stocks tumbled after Community Health Systems said admissions decreased in the fourth quarter. That’s partly because it had more patients last year with respiratory illnesses and the flu. The company took a loss as it absorbed impairment charges and set aside more money to cover unpaid bills.

It’s been a bad couple of weeks for company earnings. Three-fourths of the companies listed on the S&P 500 have reported their quarterly results, and earnings are expected to fall almost 5 percent compared with a year ago, according to S&P Capital IQ. That’s mostly because of plunging oil prices, which are pummeling energy company profits.

Analyst Lindsey Bell of S&P Global Markets Intelligence says that we’re in the middle of a cycle that will see S&P 500 profits fall for four quarters in a row, but the market is focused on other issues, including concerns about the health of China’s economy and central bank policy.

“You don’t hear a lot of people talking about how we’re going to have a nearly five-percent decline in earnings,” she said.

Bell says earnings will start growing again later this year because companies have lowered the bar. Still, analysts are swiftly lowering their estimates for 2016. She says analysts now expect earnings growth of 2.9 percent, down from 7.4 percent at the start of 2016.

Daily deals site Groupon notched a large gain for the second day in a row. The stock rose $1.19, or 41.2 percent, to $4.08 after Chinese e-commerce site Alibaba disclosed it had taken a 5.6 percent stake in the company. Groupon stock jumped 29 percent Friday after the company reported its fourth-quarter results, but the stock is still in a big slump over the last year.

Tuesday started with gains for Asian stocks. China’s central bank guided the yuan higher, pushing the currency close to its highest level of the year. That’s a positive sign for the Chinese economy. Along with many other factors, weakness in the yuan this year has caused investors to worry about the health of the Chinese economy. China’s official news agency also said new yuan loans climbed in January.

In Japan, a report showed the economy was weaker than expected, but that still gave stocks a boost because investors hope it will convince the Bank of Japan to take further steps to stimulate the economy.

Russia and Saudi Arabia said Tuesday they had reached a deal to freeze their oil output, but the deal won’t take effect unless other OPEC nations also agree to it. Analysts say Iran probably won’t sign on because it wants to increase production following its period of sanctions.