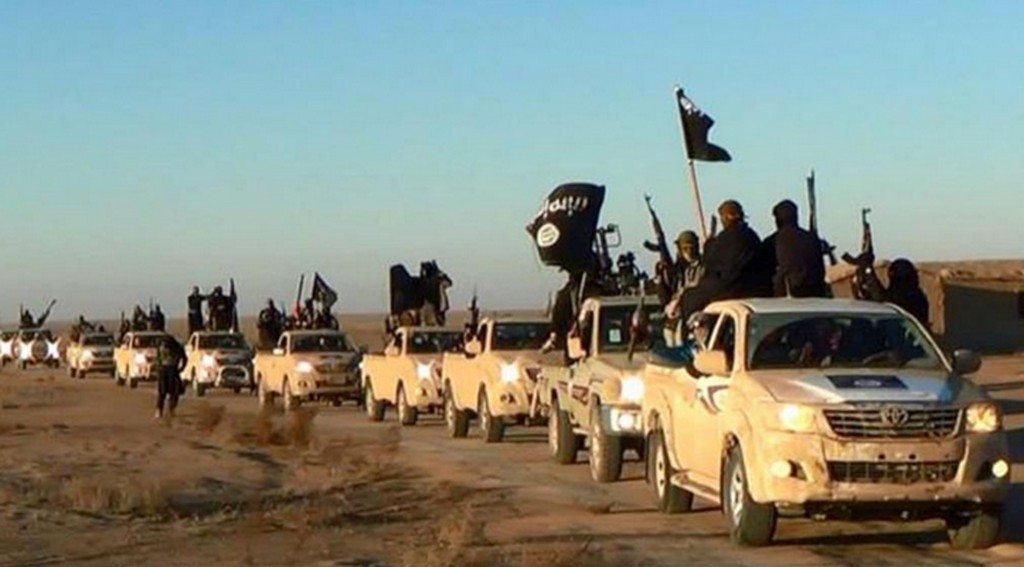 Faced with a cash shortage in its so-called caliphate, the Islamic State terror group has slashed salaries across the region, asked Raqqa residents to pay utility bills in black market American dollars, and is now releasing detainees for a price of $500 a person.

The terrorists who once bragged about minting their own currency are having a hard time meeting promised new baby bonuses, and the group has even stopped providing the smaller perks: free energy drinks and chocolate bars.

Necessities are dwindling in its urban centers, leading to shortages and widespread inflation, according to exiles and those still suffering under its rule. Interviews gathered over several weeks included three exiled Syrians who have networks of family and acquaintances still in the group’s stronghold in Raqqa, residents in Mosul, and analysts who say IS is turning to alternative funding streams.

In Raqqa, the group’s stronghold in Syria, salaries have been halved since December, electricity is rationed, and prices for basics are spiraling out of reach, according people exiled from the city.

“Not just the militants. Any civil servant, from the courts to the schools, they cut their salary by 50 percent,” said a Raqqa activist now living in the Turkish city of Gaziantep, who remains in close contact with his native city. But apparently that wasn’t enough to close the gap for a group which needs money to replace weapons lost in airstrikes and battles, and pays its terrorists first and foremost. Those two expenses account for two-thirds of its budget, according to an estimate by Aymenn Jawad al-Tamimi, a researcher with the Middle East Forum who sources Islamic State documents.

Al-Tamimi came across a directive announcing the terrorists’ salary cuts in Raqqa: “On account of the exceptional circumstances the Islamic State is facing, it has been decided to reduce the salaries that are paid to all mujahedeen by half, and it is not allowed for anyone to be exempted from this decision, whatever his position.”

Those circumstances include the dramatic drop in global prices for oil — once a key source of income — airstrikes that have targeted cash stores and oil infrastructure, supply line cuts, and crucially, the Iraqi government’s decision to stop paying civil servants in territory controlled by the terrorists.

Within the last two weeks, the terrorist group started accepting only dollars for “tax” payments, water and electric bills, according to the Raqqa terrorist, who asked to be identified by his nom de guerre Abu Ahmad for his safety. “Everything is paid in dollars,” he said. His account of the situation was confirmed by another ex-Raqqa resident, who, like Ahmad, also relies on communications with a network of family and acquaintances still in the city.

An exile from al-Bab said low-level terrorists there have begun to grumble, and townspeople have overheard Islamic State officials discussing crippling airstrikes on oil infrastructure in Syria and Iraq and the cutoff of supply lines and revenue sources. The resident, who asked only that his first name Oussama be used because he still has family in the city, said dozens of residents of al-Bab have fled, ignoring orders from the terrorists.

“You can sense the frustration, their morale is down,” Oussama said of the terrorists.

In Iraq, where IS has slowly been losing ground over the past year, the Iraqi government in September cut off salaries to government workers within territory controlled by the terrorists, after months of wavering about the humanitarian costs paid by those trapped in the region. Iraqi officials estimate that IS taxed the salaries at rates ranging from 20 to 50 percent, and analysts and the government now estimate a loss of $10 million minimum each month. Between the loss of that money — and the U.S.-led bombing of cash warehouses — American officials are optimistic that the effect could diminish IS’s wealth.

“We are seeing our efforts having some effect on their financial flows. And it’s difficult to get a handle on just how much because of the different illicit ways in which they are handling their finances but you’ve seen the efforts that our military has taken to take out cash storage sites, and I think it is our hope and expectation that that will have demonstrable effects. On what order of magnitude, I think it’s difficult to say,” said Lisa Monaco, President Barack Obama’s Counterterrorism Adviser.

In the Iraqi city of Fallujah, terrorists who once made $400 a month aren’t being paid at all and their food rations have been cut to two meals a day, according to a resident. That account, from a resident, who spoke on condition of anonymity for fear of death at the hands of terrorists, was supported by that of another family trapped in Fallujah who said inhabitants can only leave the city if they pay $1,000 — a sum well beyond the means of most in the Sunni-majority city that was the first in Iraq to fall to IS in 2014.

IS is also allowing Fallujah residents to pay $500 for the release of a detainee, the family in Fallujah told the AP, saying that they believed the new policy was put in place to help the group raise money — a system akin to bail.

Mosul residents contacted by AP say IS has begun fining citizens who do not adhere to its strict dress code, rather than flogging them as before. The residents say they believe this is in response to financial problems,  in part because the group has already confiscated anything valuable, namely cars and other goods that are later resold in Syria.

American officials have said the terrorists are more constricted in their movements and spending than they have been in months. But the group still controls a vast amount of territory, and they say the Syrian government has made few gains against the terrorists themselves. Meanwhile, IS keeps up its deadly combination of threats and penalties for anyone whose support of the group appears to be wavering.

The Soufan Group, in a Jan. 27 analysis, said IS is looking for alternative funding streams in Libya, where it is under less pressure — and doesn’t face airstrikes. And the terrorists are still getting their food baskets and free electricity — even if, as one of the Raqqa exiles said, they no longer get chocolate bars and energy drinks.

“I don’t think this is fatal for IS,” said al-Tamimi. “I still don’t think internal revolt is going to be the outcome. It’s more like a scenario of gradual decay and decline.”