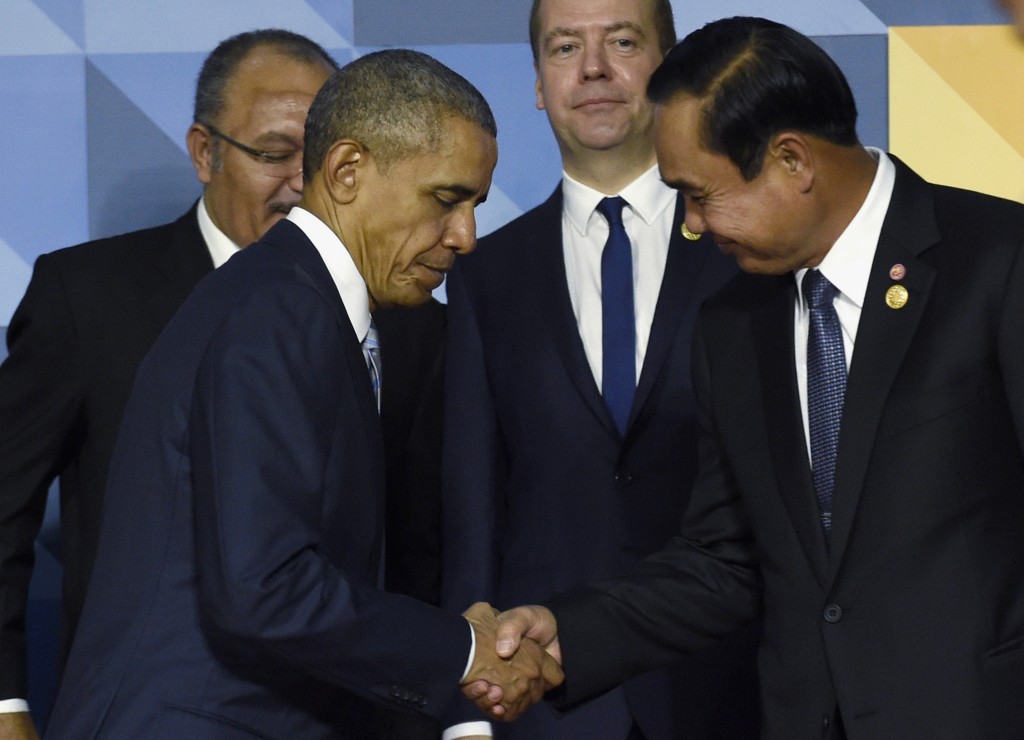 President Barack Obama hosts Southeast Asian leaders at an unprecedented summit in California starting Monday as he looks to deepen ties with the region’s fast-growing economies. But a nation not invited — neighboring power China — will be the proverbial elephant in the room as the leaders grapple with sensitive territorial disputes.

As part of Obama’s so-called pivot in U.S. foreign policy toward the Asia-Pacific states, he has made a point of traveling to the region each fall to meet with the 10-nation Association of Southeast Asian Nations, or ASEAN.

Now, Obama is inviting ASEAN leaders to the U.S., and to the same venue where he hosted China’s President Xi Jinping in 2013. U.S. officials say the two-day summit at the Sunnylands estate is not directed against China, a strategic rival of the U.S. But the military might and economic clout of the rising Asian power is likely to loom over their discussions.

Some things to know about the summit:

The top security issue on the agenda. China says it has a historical right to virtually all of the South China Sea and has built seven artificial islands, including airstrips, to assert its sovereignty. Taiwan and ASEAN members Brunei, Malaysia, Vietnam and the Philippines also claim land features in these potentially resource-rich waters, an important thoroughfare for world trade.

Although not a claimant, the U.S. has spoken out against China’s conduct and the U.S. Navy has sailed close to some of the artificial islands, angering Beijing but getting some quiet encouragement from most ASEAN members. The U.S. is looking for ASEAN to take a unified stance by calling for the territorial disputes to be resolved according to international law.

America has longstanding economic interests in Southeast Asia. U.S. companies have invested $226 billion in the region, and two-way trade was $254 billion last year. On Day One at Sunnylands, the leaders will discuss how to expand trade and investment with the help of U.S. entrepreneurship and innovation.

Also likely on the agenda: the Trans-Pacific Partnership, or TPP, Obama’s signal achievement on trade, which the administration often characterizes as an opportunity for the U.S., rather than China, to shape the rules of world trade. The four ASEAN members in TPP — Brunei, Malaysia, Singapore and Vietnam — will want to know if Congress will ratify the pact, which remains in doubt.

Other ASEAN members, like Indonesia, the Philippines and Thailand, have expressed interest in joining TPP at a later date.

The U.S. wants to deepen counterterrorism and intelligence cooperation with Southeast Asian nations. Despite the region’s relative success in combating al-Qaida-linked terrorism since 9/11, the Islamic State group, or IS, appears to be gaining a foothold. Indonesian authorities said that IS funded a suicide attack that hit a Starbucks in Jakarta last month, the first major terrorist attack in the capital city in six years. Singapore, Malaysia and Indonesia (the world’s most Muslim-populated nation), have all reported citizens traveling to fight in Iraq and Syria, and several small terrorist groups in the Philippines have pledged allegiance to IS.

The 10 members of ASEAN run the gamut of political systems, from open democracy to one-party rule. Obama will emphasize the importance of the rule of law and civil society but likely avoid open criticism of a particular nation. Human rights activists have faulted the U.S. for inviting unelected leaders, like Thai Prime Minister Prayuth Chan-ocha, who seized power in a May 2014 military coup.

Also attending is Cambodia’s Hun Sen, who has used violence and intimidation against political opponents and is making his first official U.S. visit during a 31-year tenure as prime minister.

Like Obama, several of the ASEAN leaders are lame ducks with little time left in office. They include Philippine President Benigno Aquino III, whose six-year term ends in June, and Vietnamese Prime Minister Nguyen Tan Dung, who was sidelined at a recent Communist Party congress. Both men are due to come to Sunnylands, but the outgoing leader from Myanmar is sending a deputy in his place.

Myanmar’s President Thein Sein has overseen democratic reforms in the former pariah state but his pro-military party was trounced in November elections and he’ll stand down by April. The new government led by the party of Nobel laureate Aung San Suu Kyi has yet to take office.