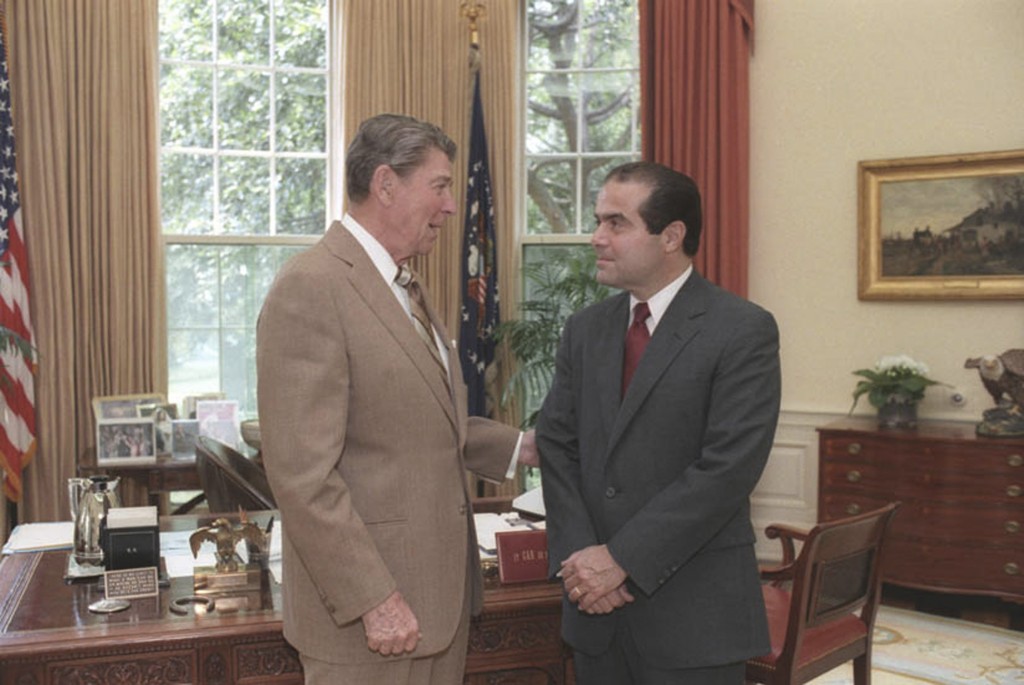 The stunning death of Supreme Court Justice Antonin Scalia, announced just hours before the six remaining Republican presidential candidates gathered Saturday evening in South Carolina for a debate, immediately ups the ante in the GOP primary and could well cement the base’s commitment to nominating a “true” conservative along the lines of Senator Ted Cruz of Texas.

“We ought to make the 2016 election a referendum on the Supreme Court,” Cruz told the NBC on Sunday. “I cannot wait to stand on that debate stage with Hillary Clinton or Bernie Sanders and talk about what the Supreme Court will look like depending on who wins.”

As Cruz well knows, there is no issue that so animates the Republican base as appointments to the judicial bench – most notably the Supreme Court. Many conservatives have never forgiven then-President George H.W. Bush for appointing David Souter to the court, only to see Souter turn into a less-than-ideal conservative pick. George W. Bush’s 2005 nomination of Harriet Miers was scuttled by conservatives who believed her past record demonstrated a lack of fealty to their principles.

The importance of the court, and of the party of the president who nominates the justices, has been made ever more clear to Republicans during the Obama administration. In the past seven years, the court has ruled that the Affordable Care Act is constitutional and has legalized immorality – two rulings that the GOP’s conservative base views as betrayals.

In a July 2012 Washington Post-ABC News poll, 61 percent of self-identified conservatives said that judicial appointments were extremely or very important in deciding their vote – considerably higher than the 49 percent of the general electorate who said the same. A 2015 Pew Research Center poll showed that 67 percent of conservative Republicans had an unfavorable view of the court.

At a Republican presidential debate in September, Cruz condemned the “out-of-control court.” He added, “I give you my word, if I’m elected president, every single Supreme Court justice will faithfully follow the law and will not act like philosopher kings.”

Cruz was far from alone in bashing the court. Even mild-mannered former Florida Governor Jeb Bush had harsh words for Chief Justice John G. Roberts Jr., saying that “he did not have a proven, extensive record that would have made the clarity the important thing, and that’s what we need to do.”

Cruz, a well-regarded constitutional lawyer who has argued several cases before the Supreme Court, would seem to be the obvious beneficiary of a more-energized Republican base looking for someone who is committed to fighting to make sure that the court represents conservative values. (Worth noting: Cruz voted for Roberts as chief justice, a vote he has come under attack for from Donald Trump.)

Scalia “was an unrelenting defender of religious liberty, free speech, federalism, the constitutional separation of powers, and private property rights,” Cruz said in a statement posted on his social media page Saturday evening. “All liberty-loving Americans should be in mourning.”

The death of Scalia and the opening it creates on the court could well cause Trump problems, given his past wishy-washiness regarding the sort of people he would like to see on the bench. Trump was more forceful on Sunday with NBC host Chuck Todd. “I’d like to have the person tailored to be just like Justice Scalia,” he said.

Other 2016 candidates – such as Bush and Senator Marco Rubio, R-Fla. – are likely to use Scalia’s death to argue that the stakes of electing a president in November are even higher than they were before this past weekend, a way of arguing that picking Cruz or Trump, both of whom trail Democratic presidential candidate Hillary Clinton in most general-election surveys, could have disastrous consequences.

It remains to be seen whether that sort of appeal to electability, which hasn’t affected the rises of Trump and Cruz so far, will suddenly become an issue that sways persuadable Republican voters in the wake of Scalia’s death.

What is known is that the justice’s death will reshape the fight for the Republican nomination and the White House in the fall in ways large and small. At first blush, those changes should further move the debate within the GOP into territory where Cruz is comfortable and can make a compelling case for his candidacy.