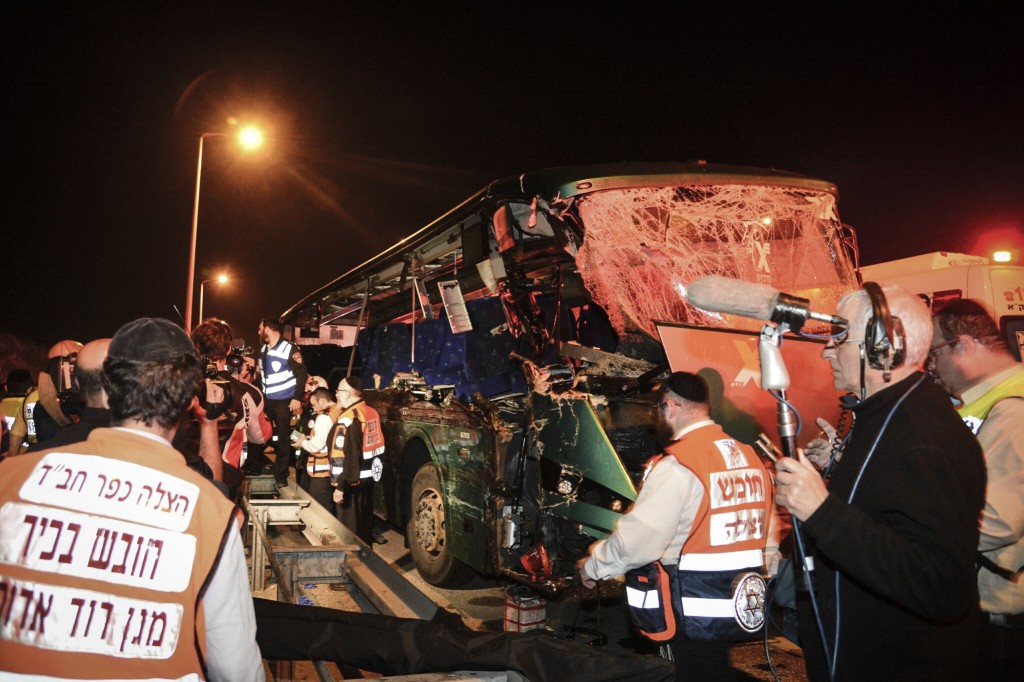 Police on Monday announced that the driver of the bus involved in a fatal crash Sunday night appeared in traffic court in Yerushalayim Monday morning, where a judge granted a police request to extend his remand. The driver is to be charged with negligent manslaughter in the crash, in which six people were killed.

Police investigators testifying in court Monday said that besides acting in a careless manner and driving aggressively, the driver attempted to tamper with the vehicle’s “black box” – the recording device that keeps track of the movements of the bus, how fast it was going, etc. Besides responsibility for the deaths, the driver may also be charged with evidence tampering and other associated crimes.

Police investigators said that their initial assessment was that the driver of the number 402 bus from Yerushalayim on its way to Bnei Brak, acted in an aggressive manner and failed to avoid hitting the truck that was in the breakdown lane on the side of the road, near the Modi’in turnoff on Road 1. He is being charged with negligent manslaughter. Police are investigating reports that he was talking on a cellphone when the crash occurred.

The driver’s attorney, Leah Goldman, asked that her client be released on his own recognizance, as he had no criminal past and, as a family man, was an unlikely flight risk. She told the court that he was very remorseful over his role in the crash, and that the accident had also caused him much personal suffering. In addition, with his license revoked, he would now be unable to support his family as a driver – but he would no longer constitute a danger to others on the road, so there was no reason to keep him in jail.

In response, police said that the same driver had been involved in an accident in 2013 under similar circumstances, and in the same area – and had injured 18 people in that accident, none seriously. Afterwards, Israel Radio reported, the Egged bus company had reassigned the driver to local routes, and taken off inter-city routes – but several weeks ago he was restored to his previous status, and was assigned routes between Yerushalayim and Tel Aviv or Bnei Brak.

The court decided to grant the police request, saying that it would be difficult to conduct the investigation without the driver remaining in custody.

One of those injured in the accident and in need of rachamei Shamayim, 20-year-old Sara Springer, is to be married in a few weeks. The family has asked that people daven for Sara bas Dina.