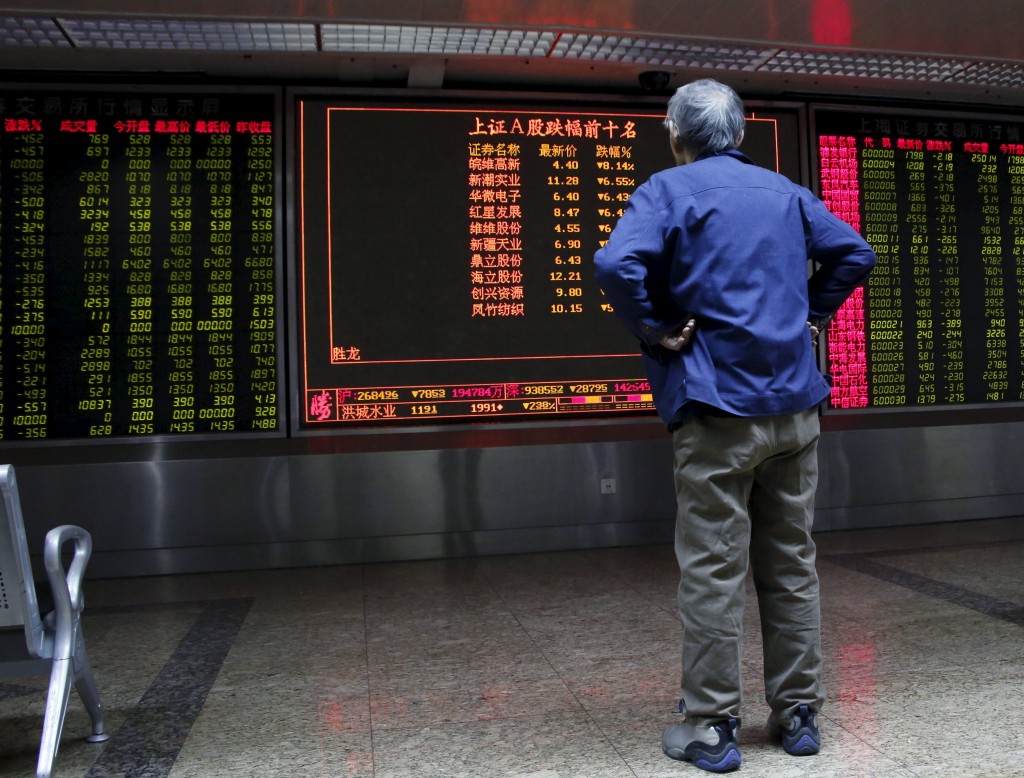 Asian shares snapped a five-session losing streak on Monday as China’s central bank fixed the yuan sharply stronger, easing fears of depreciation for now, though a string of weak data from Japan to China and Indonesia suggested the bounce may be short-lived.

European shares were set to follow Asia higher. Financial spreadbetters expected Britain’s FTSE 100 to open as much as 1.4 percent higher, with Germany’s DAX and France’s CAC 40 both seen up nearly 1.3 percent.

E-Mini futures for the S&P 500 rose 1.1 percent, though markets in the U.S. are closed on Monday for a holiday.

Most stock markets in Asia advanced early, encouraged by a stronger finish in U.S. and European markets on Friday and by a relatively calm opening for China’s volatile markets after a week-long holiday.

MSCI’s broadest index of Asia-Pacific shares outside Japan rose 2.3 percent, after losing 10 percent of its value so far this year.

In China, spot yuan jumped more than 1 percent to 6.4900 per dollar – its firmest this year – after the People’s Bank of China set its daily midpoint 0.3 percent stronger and the head of the bank was quoted as saying speculators should not be allowed to dominate market sentiment.

The Shanghai Composite Index was down 0.7 percent in its first session since Feb. 5, a relatively benign move given the wild swings seen worldwide recently.

“The poor trade data in January suggests weakening of the underlying momentum in trade growth, which reflects lingering sluggishness in both external demand and fixed asset investment in China,” Bank of America Merrill Lynch strategists said.

The disconnect between markets and economics was perhaps the starkest in Japan, where the Nikkei was on track to post its biggest single-day rise since the depths of the global financial crisis in 2008, shrugging off data which showed the economy contracted by an annualized 1.4 percent in the final quarter of 2015, worse than expected.

“Although we consider the violent risk-off move of recent weeks largely unwarranted by economic fundamentals, the sheer magnitude of the sell-off has raised the risk that market volatility could feed back into the real economy,” said Ajay Rajadhyaksha, an economist at Barclays.

“Central banks have very limited ability to ride to the rescue of risk assets.”

“Of these, we consider China the biggest medium-term risk, but the least immediate issue,” wrote Rajadhyaksha.

Indeed, the strong yuan fixing by the People’s Bank of China (PBOC) on Monday was seen by some traders as a move to deflect speculation about a possible devaluation that has been one of the main factors roiling global markets.

In an interview over the weekend, PBoC Governor Zhou Xiaochuan said there was no basis for the yuan to keep falling, and China would keep it stable versus a basket of currencies while allowing greater volatility against the U.S. dollar.

“I still believe that Zhou Xiaochuan’s comments during the weekend and today’s strong fixing rate helped alleviate some of the pressure on the CNY, at least temporarily. And so the same for Asia FX,” said Nordea Markets’ senior analyst Amy Yuan Zhuang in Singapore, referring to the yuan.

Oil prices consolidated gains after surging as much as 12 percent on Friday after a report once again suggested OPEC might finally agree to cut production to reduce the world glut.

Oil was aided in part by weakness in the U.S. dollar as a steep drop in Treasury yields undermined the currency’s interest rate differentials. Against a basket of currencies, the dollar was up a shade at 96.190 having been at its lowest in almost four months. Likewise, it edged up to 113.90 yen, having touched a 15-month trough just under 111.00 last week.

Gold eased to $1,222.80 an ounce, after enjoying its best week in four years as investors fled riskier assets.