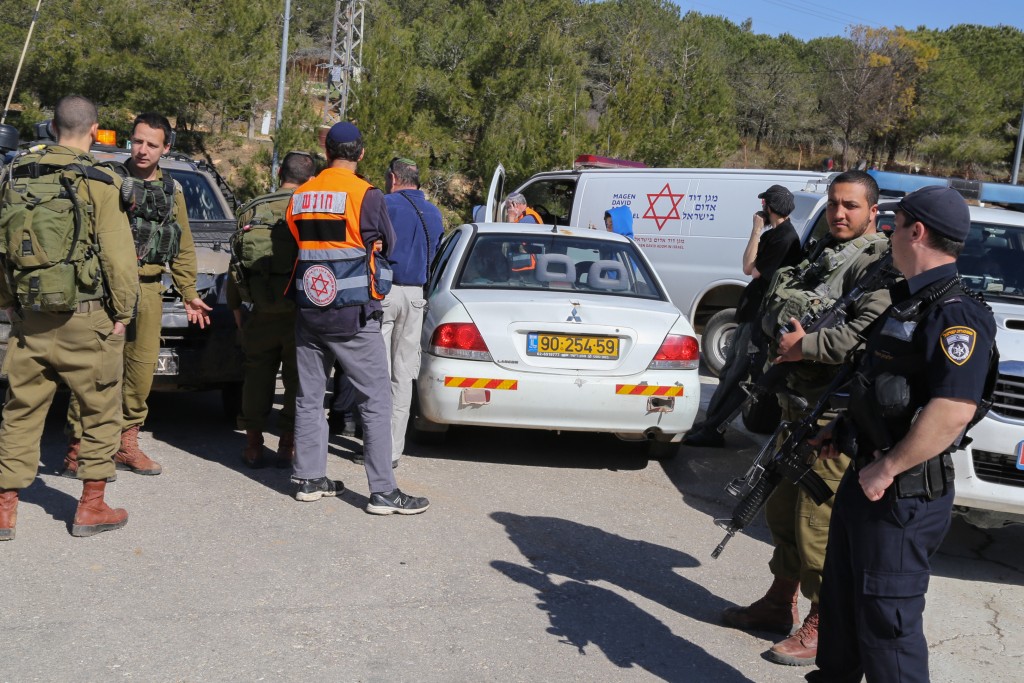 Sunday was a day of Palestinian violence all over the country, marked by shootings, attempted stabbings, rock throwing and firebombings, during which three terrorists were killed and a female terrorist critically wounded. B’chasdei Shamayim, no Israelis were hurt in the attacks.

An attempted stabbing attack took place in Chevron on Sunday evening. A female terrorist wielding a kitchen knife was shot and critically wounded. She was taken to Shaarei Zedek Hospital. Rioting broke out at the scene, but border police moved in to disperse the rioters using riot control equipment.

Later on Sunday night, two terrorists opened fire at a police unit that was being briefed at a light rail station near the Damascus Gate in Yerushalayim’s Old City. No one was hurt, and the two terrorists were neutralized at the scene.

The area was closed off due to fear of an explosive device.

Palestinian terrorists shot at a home in Beit El on Sunday night; a bullet entered through the window of a family with five young children. Shlomo Alenqueri and his wife Bitya heard a shattering noise, and when they went to see what it was, discovered the bullet hole in the glass door that leads to the porch. B’chasdei Shamayim, no one was hurt, and the IDF said it was investigating the incident. Residents said they believe Palestinians from the nearby village of Jalazun fired at the home, because they have done so in the past.

A spokesperson for the Beit El Council said, “It’s a miracle that no one was injured.”

“We demand that the defense minister take immediate action to increase security and complete the separation wall in the Beit El area,” added the spokesperson.

Earlier in the day, Arab terrorists opened fire on IDF soldiers in the northern Shomron. That incident occurred near the village of Arka, outside Jenin. Soldiers returned fire, killing the two terrorists who had fired at them. There were no injuries to Israeli forces.

An Arab terrorist was killed Sunday afternoon in the third failed terror attack of the day. Border police officers prevented a stabbing attack at a checkpoint outside Yerushalayim, an Israel police spokesperson said.

A terrorist brandishing a knife charged toward a group of police at the Mazmoriya checkpoint, between Tekoa and the Har Choma neighborhood in eastern Yerushalayim, police said. In light of the incident, the road from Tekoa to Yerushalayim was closed to traffic.

Another officer who was watching the area via security camera saw the man charging with the knife and warned the officers. A policeman shot and subdued the terrorist before any Israeli security personnel could be harmed. The terrorist later died of his wounds.

In a separate incident, IDF soldiers discovered a bomb that had been rigged to be set off by cellphone. The bomb was discovered near Mt. Eval, near Shechem. IDF bomb squad experts removed the device and dismantled it. B’chasdei Hashem, there were no injuries in that incident either.