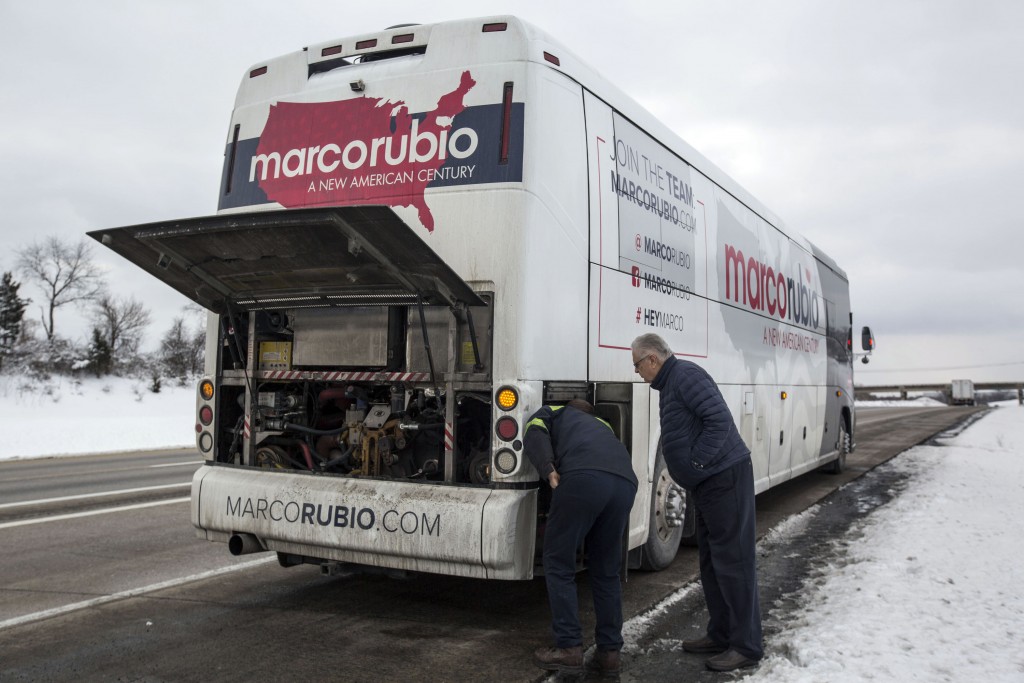 The best hope of the Republican establishment just a week ago, Marco Rubio suddenly faces a path to his party’s presidential nomination that could require a brokered national convention.

That’s according to Rubio and his senior team, who told The Associated Press that the Republican nomination fight will likely go on for another three months, if not longer. It’s a worst-case scenario for the Florida senator and many Republican officials alike who hoped to avoid a prolonged and painful nomination fight in 2016.

But after a disappointing fifth-place finish in New Hampshire, a long delegate slog to the party’s July presidential nominating convention may be the only chance Rubio has left.

“I don’t think it necessarily is negative,” Rubio said Thursday when asked about the possibility of a so-called brokered, or contested, convention. He cited the Democratic Party’s 2008 clash between Hillary Clinton and Barack Obama that went deep into the primary season.

“The Clinton-Obama campaign went all 50 states and every territory,” Rubio told reporters as he campaigned in South Carolina. “They didn’t even wrap it up until June… Then they had all sorts of uncertainty going into their convention.”

“Whatever it is, we’re prepared for it,” he said.

Rubio’s team has predicted a long primary season in recent weeks, almost by necessity, as polls suggested he would struggle to score any wins in the early voting states. He finished third in Iowa, fifth in New Hampshire, and is already trying to lower expectations for South Carolina’s Feb. 20 election.

The public embrace of a possible brokered convention marks an evolution in public rhetoric from Rubio’s team that could be designed to raise alarm bells among Republican officials. Yet days after a disappointing fifth-place finish in New Hampshire and looking up at Donald Trump in next-up South Carolina, Rubio’s presidential ambitions are truly facing growing odds.

“After this week I feel 55,” the 44-year-old senator joked as he courted voters at an Okatie elderly community Thursday.

He opened up about his challenges with reporters over a late breakfast in an Okatie Cracker Barrel restaurant with his wife and children. The senator ate a stack of blueberry pancakes – soft food, he said, because he cracked a molar the night before on a flight back to Washington, D.C.

He again took responsibility for a poor debate performance last week in New Hampshire and promised to be more aggressive going forward. He was interrupted before the conversation turned to the convention by his teary 8-year-old son, Dominick, who said one of his siblings had pinched him.

Soon after the issue was resolved, Rubio charged that his campaign is prepared to compete “until it’s decided” – even if that means the GOP has to select a nominee at its July convention.

“That’s actually the way the rules work,” Rubio said of the possibility of a contested convention.

“The rules were never designed to have everybody drop out after a certain time – it’s just the way it’s worked historically because people have run out of money or they don’t see a path forward. I don’t think it necessarily is negative,” he said.

New Hampshire destroyed any momentum Rubio had coming out of Iowa and for now, at least, locks the senator into a messy muddle in his party’s establishment wing. Both Ohio Gov. John Kasich and Bush beat Rubio in New Hampshire in the contest to emerge as the mainstream alternative to Trump and Cruz.

Rubio campaign manager, Terry Sullivan, told the AP the Republican primary contest could “easily extend to May – “or the convention.”

“I would be surprised if it’s not May or the convention,” he said Wednesday.

There hasn’t been a contested convention since 1976, yet Republican National Committee officials have already had preliminary discussions about the possibility of no candidate securing a majority of delegates in the state-by-state primary contests in the coming months.

It’s by no means assured that Rubio’s candidacy will survive that long.

Despite his popularity among many Republican leaders, he will ultimately need to start winning primary contests to remain competitive – especially as Trump and Cruz perform well.

As the primary contest shifts to South Carolina, Rubio wants voters to know he’s learned an important lesson from his experience in New Hampshire. Instead of trying to avoid attacking his GOP rivals on the debate stage, Rubio said he’s now prepared to fight back when necessary – particularly with his party’s front-runner Donald Trump.

A more aggressive Rubio showed up Thursday in Okatie.

“I will never ask you to be angry at another group of Americans in order to win an election,” he added in a clear reference to Trump.

The mood was encouraging inside the packed Okatie rally.

“He had a bad moment. They all have bad moments,” said Barbara O’Connor, 67, a registered Republican.

“I loved that he took responsibility,” she continued. “I hope he wins.”