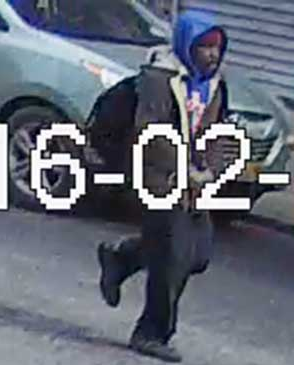 A knife that may have been used in a stabbing Wednesday in Crown Heights has been found near the scene of the crime, and police believe they know the identity of the perpetrator, according to Crown Heights Shomrim.

After receiving a call Thursday morning from a community member who saw a knife in the vicinity of the scene of Wednesday’s crime – in which a newlywed Lubavitcher Chassid was stabbed on Empire Blvd. between Kingston Ave. and Albany Ave. – Shomrim secured the knife and gave it to the New York Police Department, a source in Crown Heights Shomrim told Hamodia. The knife, which was found two blocks from the crime scene in the direction that the perpetrator had fled, had blood on it and looks similar to the knife seen in the hand of the perpetrator on a security camera.

The victim, Yehuda Leib Brikman, is in stable condition in Kings County hospital. He suffered a collapsed lung after being stabbed from behind. The motive for the attack is unknown, though the NYPD is looking into the possibility of it being a hate crime due to Brikman’s obvious Chassidic garb.

The NYPD is searching for the perpetrator, who was seen in surveillance camera footage fleeing the scene with a knife in his hand. Police believe they know his name, though they have not yet released it; upon viewing the surveillance video, a police officer recognized the perpetrator, as he had given him a summons several weeks ago.

The Anti-Defamation League has offered a $5,000 reward for information leading to the arrest of the perpetrator.