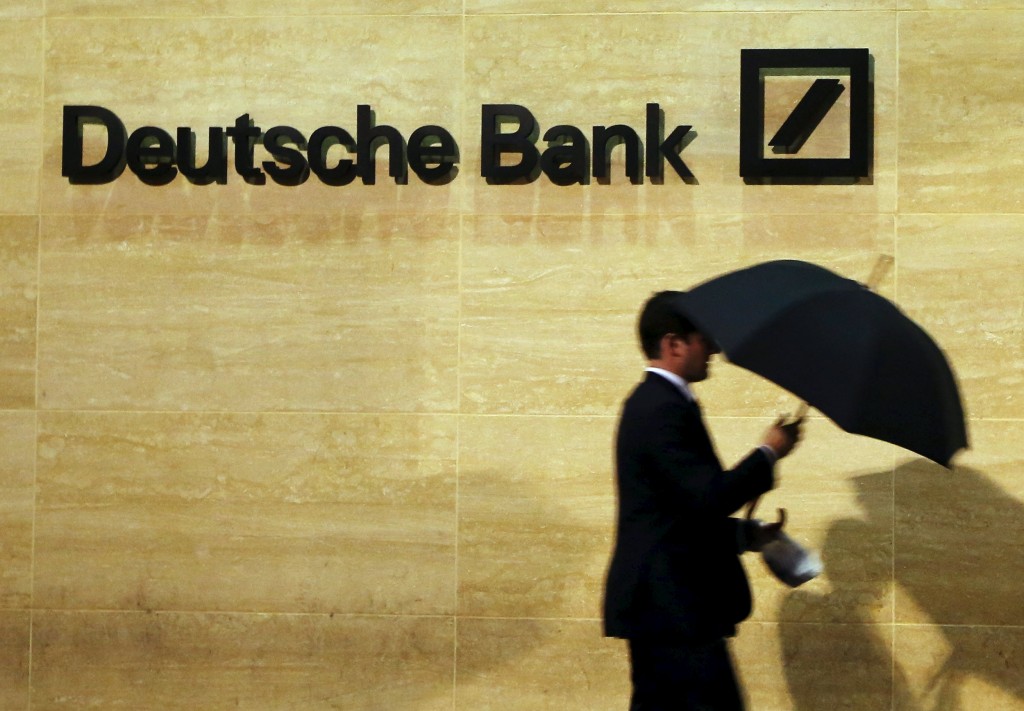 Deutsche Bank executives face a formidable task to drag its shares off a 30-year low, with reassurances about its capital levels doing little to improve investor confidence and few other options on the table to trigger a recovery.

Germany’s flagship lender has trailed its rivals in bouncing back from the 2008 financial crisis, hamstrung by having to pay out billions of dollars in fines to end a string of legal disputes and upgrade aging technical infrastructure.

It is the last of the major European banks to embark on a painful restructuring of its bloated investment bank, in the face of tougher regulation that reduced profitability. The cost of that overhaul contributed to it posting its biggest annual loss on record last month.

Deutsche Bank’s shares have fallen around 40 percent since the start of the year, leading a slump across the European banking sector – with a relief rally on Tuesday (after the bank said it had reserves to pay coupons on its riskiest type of debt) already extinguished and erased by the afternoon.

Shareholders are worried about the ability of management to execute the two-year turnaround plan, announced last October, in light of a deteriorating global economic outlook and negative interest rates.

“Investors have completely lost their faith in the bank,” a top 10 shareholder told Reuters, adding that a fast recovery in the share price was unlikely given the magnitude of the problems weighing on the company.

Several investors told Reuters they feared Deutsche would need to tap markets for more capital – despite raising a total of nearly 20 billion euros ($22.6 billion) from investors in 2010 and 2014 – to deal with regulatory and legal issues. Some analysts expect it will need to issue new shares to raise billions of dollars, which is likely to further depress its share price.

“We believe that Deutsche Bank has a capital shortfall of up to 7 billion euros, depending on the outcome of a range of litigation issues, which could necessitate a highly dilutive capital increase,” Citi analysts wrote in a note last week.

“The market also expressed some concern about the adequacy of our legal provisions,” Cryan acknowledged, “but I don’t share that concern. We will almost certainly have to add to our legal provisions this year but this is already accounted for in our financial plan.”

Despite Cryan’s optimism, several investors said they felt time was running out for the bank to show successes – such as returning to profit or stabilising its share price – after other large lenders had moved on and closed their own individual chapters of the Deutsche financial crisis.

“There’s no benefit of the doubt,” another top 10 investor said, adding that investors were now voting with their feet. “Two years (as planned by Cryan for the revamp) is a long time. There’s no margin for error.”

Questions are also being raised about the quality of the bank’s supervisory board.

“We miss competence in financials on the supervisory board,” said the first top 10 shareholder, adding that support for Chairman Paul Achleitner was also waning and a new face was needed for a fresh start for the bank. “However, at this stage, there’s no obvious candidate to succeed him, so he will likely be kept in charge until the end of his mandate in May 2017,” the shareholder said.

Deutsche declined to comment on Achleitner’s position or on investor concerns about the board.

A share price slide of this magnitude – Deutsche’s market value has roughly halved from a year ago to around 19 billion euros – would normally trigger speculation that it could become a takeover target. But Cryan recently met members of German Chancellor Angela Merkel’s government, and sources close to the ruling coalition said that while the government has no direct means to deter potential suitors, Deutsche Bank does enjoy some protection as it is regarded by many Germans as a part of the national identity.

“The government would intervene in case someone launched a takeover,” said a source close to the government. He added that any suitors would be advised to seek government approval for a potential takeover of Deutsche Bank to avoid the risk of working against the will of the political establishment.

“We do not worry too much about a possible takeover of Deutsche Bank,” Cryan said at the bank’s annual press conference in late January, adding that regulators would also likely frown at the combination of two large banks. Analysts say that means Deutsche’s share price is set to be marooned at its current levels for some time – piling pressure on Cryan to demonstrate his plan to cut costs by trimming Deutsche’s investment bank and selling non-core assets.

“We think the stock will struggle to re-rate, despite being the cheapest globally systemic bank,” Morgan Stanley analyst Huw Van Steenis wrote after the bank posted its record loss.