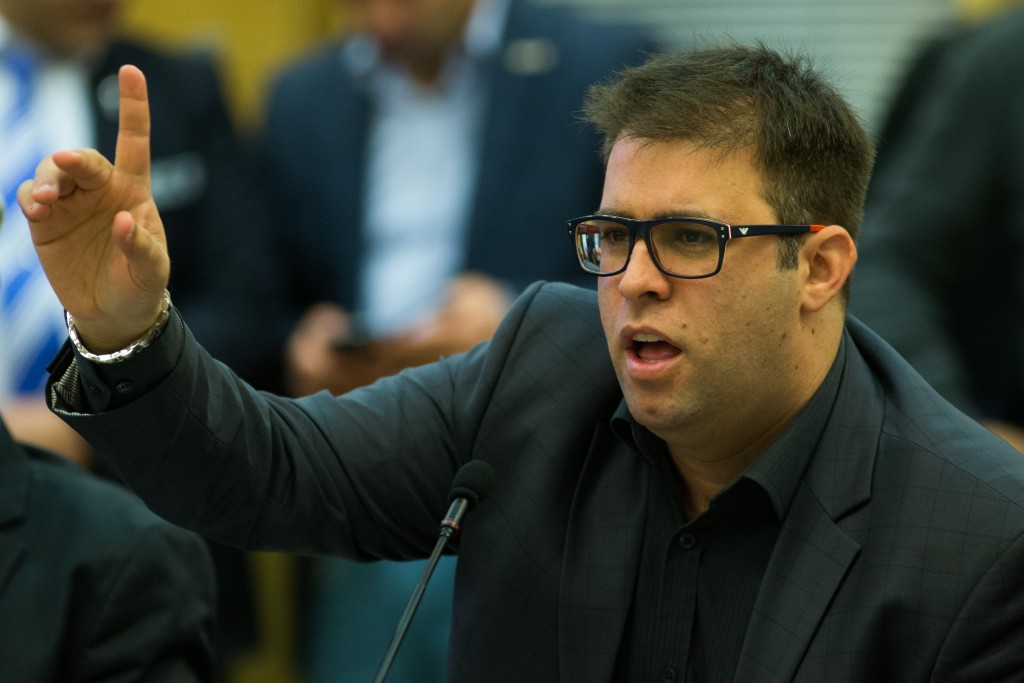 The Knesset approved a preliminary reading on Wednesday of a bill that would broaden the grounds for disqualification of people who support terrorism from running for the Knesset.

Israeli law already bars any person who denies the existence of Israel as a Jewish state, or who supports, through his actions, armed struggle against the state, from running for the Knesset.

But the new bill goes further, making not only disloyal actions but statements – such as expressions of support for terrorism – as grounds for disqualification. The burden of proving his innocence will be upon him, as opposed to the current situation, in which the state must prove an offense.

Earlier in the day, a proposal to allow a majority of 90 out of the 120 members of Knesset to expel a member for disloyal or unseemly conduct proved too incendiary for the Knesset Law, Constitution and Justice Committee to handle.

The debate on a contentious draft bill to facilitate expulsion of MKs disintegrated into a shouting match, with three MKs being ejected from the room for disorderly conduct, The Jerusalem Post reported.

“A democratic state has red lines, and whoever crosses them cannot be here,” committee chairman Nissan Slomiansky (Jewish Home) declared at the end of the meeting.

“This proposal is crossing a red line,” MK Revital Swid (Zionist Camp) responded. Swid, along with Michal Rosin (Meretz) and Oren Hazan (Likud) were removed from the meeting.

The Knesset Ethics Committee has already suspended three Balad MKs from all parliamentary activities except voting, and the police are investigating into possible charges of criminal activity in their recent sympathy visit to Palestinian terrorist families.

But the coalition is trying to formulate legislation to disqalify MKs for rejecting Israel as a Jewish and democratic state or support for or incitement to terror, armed conflict against Israel or racism. Prime Minister Binyamin Netanyahu has recommended that MKs be barred from the Knesset for “unseemly behavior,” a term which has drawn objections from within the coalition for its vagueness and potential for misuse.

Slomiansky had to postpone plans for the Constitution Committee to begin writing the bill on Wednesday because of the chaotic scene.

Rosin accused Slomiansky of allowing himself to become a puppet of the prime minister.
“You’re being used to pass this law, which shouldn’t even be discussed,” MK Yael German (Yesh Atid) told Slomiansky. “This cannot become part of Israel’s law books.”

Hazan denounced the MK’s opposing the bill as “haters of Israel.”

MK Tamar Zandberg (Meretz) warned Hazan that after the Arab MKs, he will be the bill’s next target. The Likud MK retorted that he is not worried about his post-parliamentary prospects.

Meanwhile, the Knesset Ethics Committee detailed its decision to suspend Balad MKs Zoabi and Ghattas for four months and Zahalka, who had fewer prior offenses, for two months from the Knesset, except for voting.

The committee reported receiving almost 500 complaints about the MK’s. Only one was quoted from, that of Micah Lakin Avni, whose father Richard Lakin Hy”d was murdered by a terrorist whose father hosted the meeting with the Balad MK’s.

Avni said he was shocked to hear MK’s met with the terrorist’s father “without hearing a word of regret about his son’s actions.”

“When MKs meet with terrorists’ families and even promise to act on their behalf and call murderers ‘martyrs,’ it can invite their voters to commit similar crimes. This meeting, beyond being harmful and outrageous, only distances us from the dream of coexistence my father dreamt for so many years,” he wrote.

The Balad delegation have denied that they were showing support for terrorists, and that the sole purpose of the meeting was to help the families get the slain terrorists’ bodies back. They defending a reading from the Koran and standing in silence for the terrorists as a Palestinian tradition.

“More than once the committee has differentiated between the broad political and ideological freedom of expression given to MKs, even when their stances are very far from the consensus, and identifying with and encouraging acts of terror against the state and its citizens,” the committee wrote.

“However, in this case, the legitimate activity was accompanied by actions that most members of the committee finds not to be legitimate at all and crosses the line between parliamentary and humanitarian activity and actions that encourage and support acts of terror.”

The committee said that the MKs “stood in a moment of silence at a time when there are daily terrorist attacks and attempts against citizens of the state…Jews and Arabs.

“Most members of the committee thought that participating in such a ceremonial act at this time and publicizing it on the faction’s website could be interpreted as legitimizing terror and continued bloodshed,” they stated.