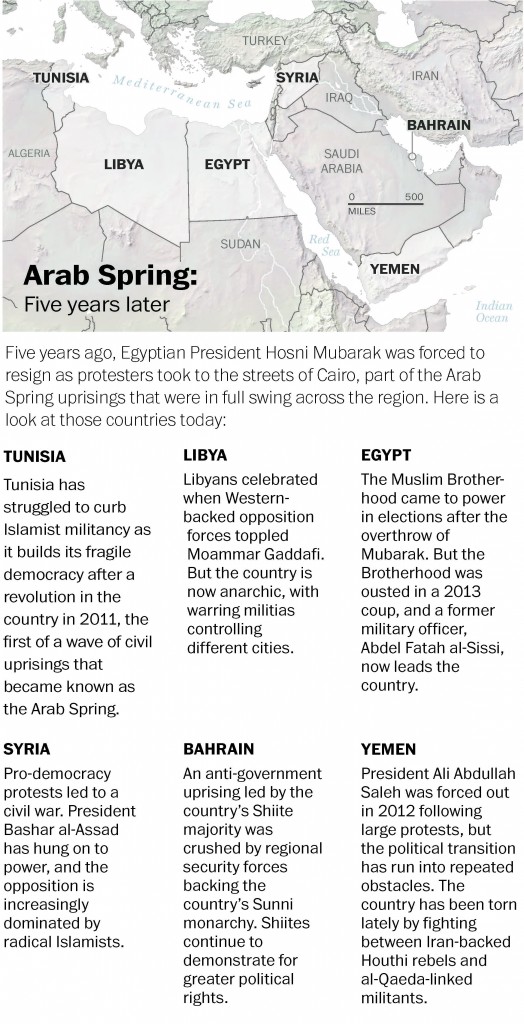 It was a day Ahmed Hassan will never forget. He was in Tahrir Square in the heart of the Egyptian capital, the nexus of the Arab Spring revolution. It was around sunset, and the crowds were dancing and reciting poetry. It was the end of President Hosni Mubarak’s nearly 30-year rule.

“It was the most beautiful moment when we heard of Mubarak’s resignation,” said Hassan, a youthful 29-year-old in his dreadlocks and a green hoodie. “I danced and was overjoyed. We were all happy together.”

On Thursday, it will have been five years since Mubarak was forced out of power. His ouster ushered in the anticipation of democracy and freedoms. Instead, Egyptians were thrust into one of the most uncertain and repressive periods of their modern history — its denouement still unfolding today.

After an interim military government, which was punctuated by abuses and military trials, Islamist President Mohamed Morsi became the country’s first democratically elected leader. But he granted himself unlimited powers, and his government cracked down on dissent, triggering nationwide protests.

The following year, the chief of the armed forces, Abdel Fatah al-Sissi, was elected president and has overseen the harshest crackdown on dissent since the republic was established by Gamal Abdel Nasser following the 1952 revolution that ended Egypt’s monarchy.

Now, thousands of Islamists and scores of secular activists are languishing in jails, more than at any period during Mubarak’s reign. Some have been shot dead in the streets. Freedoms have been curbed, and the police are increasingly accused of torture, forced disappearances and arbitrary arrests.

The crackdowns have helped fuel an escalating war against Islamic insurgents based in the Sinai Peninsula that has killed hundreds of soldiers and policemen. The Sissi rule has also seen the rise of an Islamic State affiliate that asserted responsibility for the bombing of a Russian airliner that killed 224 people last year.

Today, even key figures of the 2011 uprising, such as the secular April 6 Youth Movement, have stayed in the shadows, reluctant to take to the streets again. “I am a bit depressed and in pain and feel as if I am surrounded,” said Shereen Talaat , a well-known activist. “We are the ones being imprisoned, the ones being prevented from traveling, prevented from leaving the country.”

On the streets near Tahrir Square on Wednesday, there were mixed emotions over Mubarak’s fall. Some expressed alarm at the weakening economy. Joblessness is rising; the government recently reduced subsidies on electricity.

“We started off very hopeful. It seemed like we were really moving forward,” said Farouk Abd el Halim, 72, a shopkeeper. But now things are terrible. This would never have happened under Morsi. … If things continue like this it will explode again.”

Others like Mohamed Amin are content with Sissi. The 28-year-old tourism industry employee recalled how his business was shattered by the chaos and violence.

“We didn’t need a revolution,” Amin said. “Everything was fine under Mubarak. The economy was booming; there were tourists everywhere. The only people complaining were the activists. I lost my job; the tourists left.”

Morsi, he continued, was “going to destroy Egypt and take us back to the Middle Ages. I’m glad Sissi is in power now because there is more stability, and things are improving slowly. I think things will get better. But it would be even better if Mubarak returned.”

The former autocrat was convicted last year on corruption charges and handed a prison sentence. He’s being held at a military hospital in Cairo.