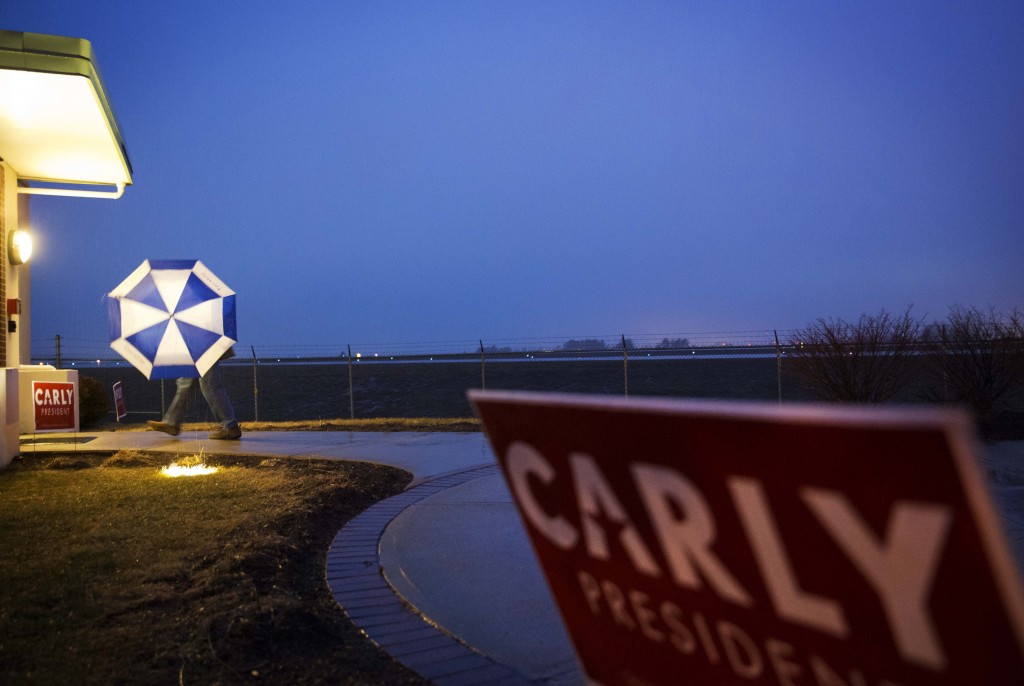 “While I suspend my candidacy today, I will continue to travel this country and fight for those Americans who refuse to settle for the way things are and a status quo that no longer works for them,” Fiorina wrote in an online statement.

“I will continue to serve in order to restore citizen government to this great nation so that together we may fulfill our potential,” the statement said.

Fiorina, 61, entered the tumultuous Republican primary in April. She promoted herself as an outsider with business experience and argued that as the lone woman in the GOP field she was best positioned to oppose likely Democratic nominee Hillary Clinton. After a standout performance in the first undercard debate, Fiorina rose to the main stage and soared in the polls in the fall. But her momentum quickly stalled and by the end of the year she had dropped back down.

In Tuesday’s New Hampshire Republican primary, Fiorina finished seventh out of eight Republican candidates, ahead of only Ben Carson.

Fiorina’s first major foray in to politics was in 2010, when she ran for Senate in California and lost to incumbent Sen. Barbara Boxer by 10 points.

Throughout her presidential bid, Fiorina emphasized her meteoric rise in the business world. A Stanford University graduate, she started her career as a secretary, earned an MBA and worked her way up at AT&T to become a senior executive at the telecom giant.

But she was also dogged by questions about her record at Hewlett-Packard, where she was hired as CEO in 1999. She was fired six years later, after leading a major merger with Compaq and laying off 30,000 workers.

This campaign was always about citizenship—taking back our country from a political class that only serves the big, the powerful, the wealthy, and the well connected. Election after election, the same empty promises are made and the same poll-tested stump speeches are given, but nothing changes. I’ve said throughout this campaign that I will not sit down and be quiet. I’m not going to start now. While I suspend my candidacy today, I will continue to travel this country and fight for those Americans who refuse to settle for the way things are and a status quo that no longer works for them.

Our Republican Party must fight alongside these Americans as well. We must end crony capitalism by fighting the policies that allow it to flourish. We must fix our festering problems by holding our bloated, inept government bureaucracy accountable. Republicans must stand for conservative principles that lift people up and recognize all Americans have the right to fulfill their G-d-given potential.

To young girls and women across the country, I say: do not let others define you. Do not listen to anyone who says you have to vote a certain way or for a certain candidate because you’re a woman. That is not feminism. Feminism doesn’t shut down conversations or threaten women. It is not about ideology. It is not a weapon to wield against your political opponent. A feminist is a woman who lives the life she chooses and uses all her G-d-given gifts. And always remember that a leader is not born, but made. Choose leadership.

As I have said to the many wonderful Americans I have met throughout this campaign, a leader is a servant whose highest calling is to unlock potential in others. I will continue to serve in order to restore citizen government to this great nation so that together we may fulfill our potential.