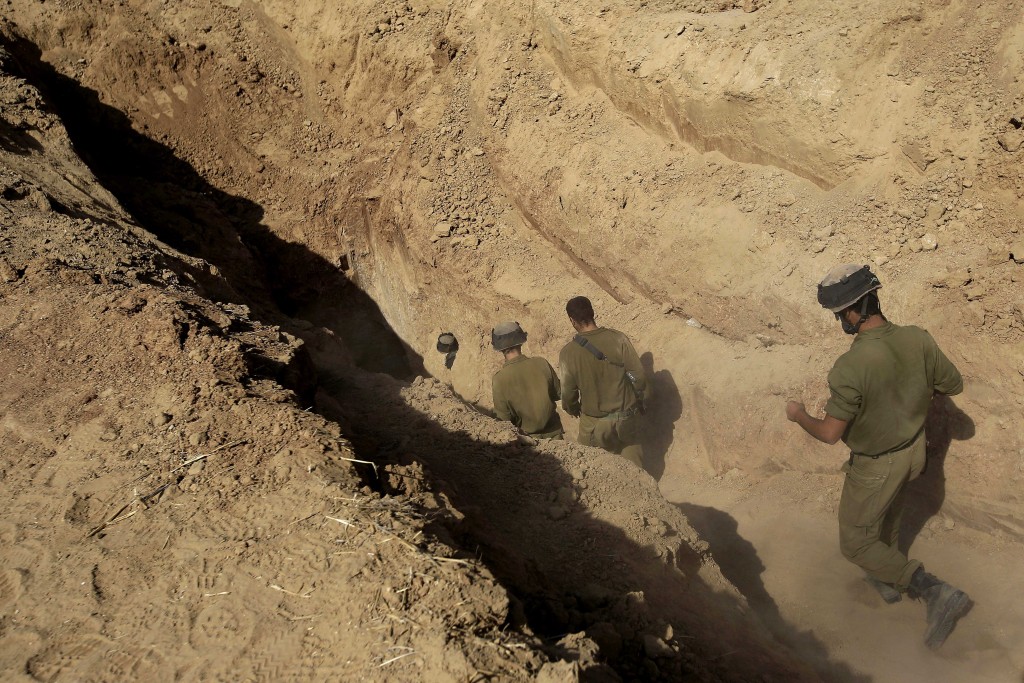 Israel is preparing to fund a project that officials believe could solve the problem of Hamas tunnels once and for all, Channel Ten reported Monday. After reviewing approximately 400 ideas, projects, and technologies, Defense Minister Moshe Yaalon and other security officials have reportedly chosen a specific technology which they believe could allow the IDF to effectively deal with the tunnel problem – detecting them and destroying them or otherwise neutralizing their usability.

While there are many ways to destroy a tunnel – such as flooding them or pumping poison gas into them – most of the “simple” methods cause major problems, such as destabilizing the ground or gas seepage, and harm to civilians.

In a search of a solution, the defense establishment recruited researchers at Israel’s top universities, as well as experts at some of the country’s most important technology and defense firms. Test runs of the chosen solution will begin in the coming months, the report said.

The IDF and defense establishment have been struggling with the terror threat for a decade, but until now no solution had been found. That seeming impasse, however, was due to the fact that previously, low budget allocations resulted in low motivation among potential problem solvers in the research and private sectors. It is only in the past two years, and especially since Operation Protective Edge, that the defense establishment has allocated the large sums needed for the research, the report quoted industry officials as saying.

Last week, State Comptroller Yaakov Shapira handed over to Yaalon and Prime Minister Binyamin Netanyahu the outline of a report he is preparing on the way the government is handling the tunnel terror threat in southern Israel – and the state is not performing well, the report said. The report says that there have been “serious lapses” in the way the government and IDF have been handling the threat, and that little has been done to prevent a repeat of the incidents that occurred before and during Operation Protective Edge in the summer of 2014.

The report relates mainly to the incidents that occurred during that period. Hamas used the tunnels during the war to carry out attacks, such as the one that killed IDF soldier Hadar Goldin, Hy”d, during the war, when he descended into a tunnel to blow it up.

For months, rumors have circulated that Hamas has taken up its tunnel-building activities again, after halting in the wake of Operation Protective Edge last year. Over the weekend, Channel One broadcast a news report that quoted dozens of residents of the towns and farms living along the border area, who claim to have heard sounds of construction under their homes – drilling, hammering, and other similar sounds, as well as voices speaking Arabic. Several residents recorded the sounds, and they were played back for the hundreds of thousands of people who tuned in for the program.

In the wake of that report, the IDF has begun examining complaints of underground activity in the Gaza border area, in order to determine if Gaza terrorists are indeed building tunnels into Israel. Speaking to Israel Radio, former National Security Council head Giora Eiland said that although the IDF is digging up areas near the Gaza border where the sounds had been heard, nothing has been found yet – but that could mean the army is not looking in the right place, or that Hamas is digging tunnels to a greater depth than the IDF had dug.

For his part, Hamas head Ismail Haniyeh was only too eager to confirm the resumed tunnel construction. Last week Haniyeh said that the tunnels were a central component of Hamas’s attack strategy against Israel. Haniyeh threatened that “the men of Hamas are digging their way to the liberation of Jerusalem,” and stated: “we continue to dig tunnels in east Gaza and conduct missile tests in west Gaza.”