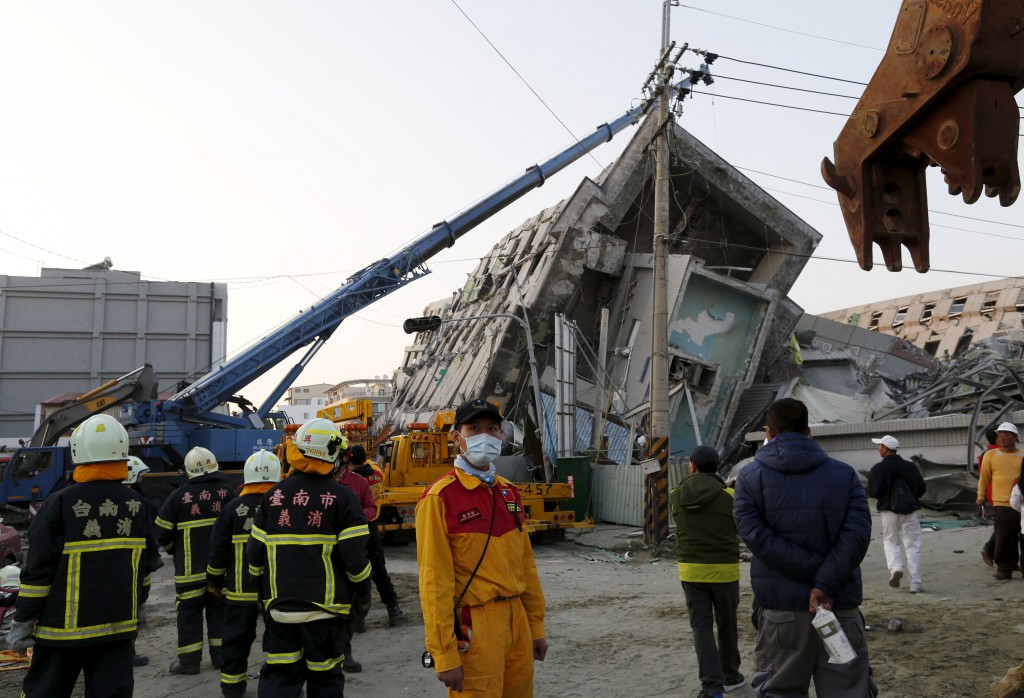 Two survivors were pulled out alive from a toppled high-rise apartment building on Monday, two days after a powerful quake in southern Taiwan killed at least 37.

Taiwan’s Eastern Broadcasting Corp. reported that Tsao Wei-ling called out “Here I am” as rescuers dug through to find her. Another survivor, Lee Tsung-tien, 42, was pulled out conscious from the sixth-floor section of the folded 17-story building.

Rescuers also found signs of life from a 28-year-old woman who is a migrant worker and an 8-year-old girl, both conscious but trapped in the fifth-floor section, according to a notice posted at a rescue information center on site.

More than 100 people are believed to be still buried in the collapsed building from the disaster that struck over the weekend.

Family members of the missing continued to flood into the information center in search of their loved ones or sat by anxiously. Some of them walked around with green name cards around their necks indicating their missing relative’s name and location in the building.

The government in Tainan, the worst-hit city, said that more than 170 people had been rescued from the 17-story building, which folded like an accordion after the quake struck.

“It was all topsy-turvy. You couldn’t even tell where the ceiling was,” a 15-year-old survivor, only identified by his surname, Hu, said on EBC channel. He said he had crawled out of a window to alert rescuers to his parents’ location, and they were all rescued soon after Saturday’s quake.

The death toll from the powerful 6.4-magnitude quake stood at 37. Thirty-five of those were from the building collapse in Tainan city, and two other people died elsewhere in the city.

Rescuers said Tsao was found near the body of her husband, who had shielded her from a collapsed beam, Taiwan’s government-run Central News Agency reported. Her husband and 2-year-son were found dead, while five members of her family remained unaccounted for, it said.

Earthquakes frequently rattle Taiwan, but most are minor and cause little or no damage, though a magnitude-7.6 quake in central Taiwan in 1999 killed more than 2,300 people.

The spectacular fall of the high-rise, built in 1989, raised questions about whether its construction had been shoddy. Tainan’s government said the building had not been listed as a dangerous structure, and Taiwan’s interior minister, Chen Wei-zen, said an investigation would examine whether the developer had cut corners.

Chen Fu-yuan, chairman of a Tainan structural engineers’ association whose members assessed whether it was safe for rescuers to carry out work, said the building may have collapsed because its foundations, built on loose earth, may not have been strong enough or because its construction materials weren’t of sufficient quality. “But this needs to be evaluated by authorities,” he said.

Chen said that Taiwan has had anti-quake standards for buildings since the 1970s, but they had become stricter over time, particularly after the 1999 earthquake.