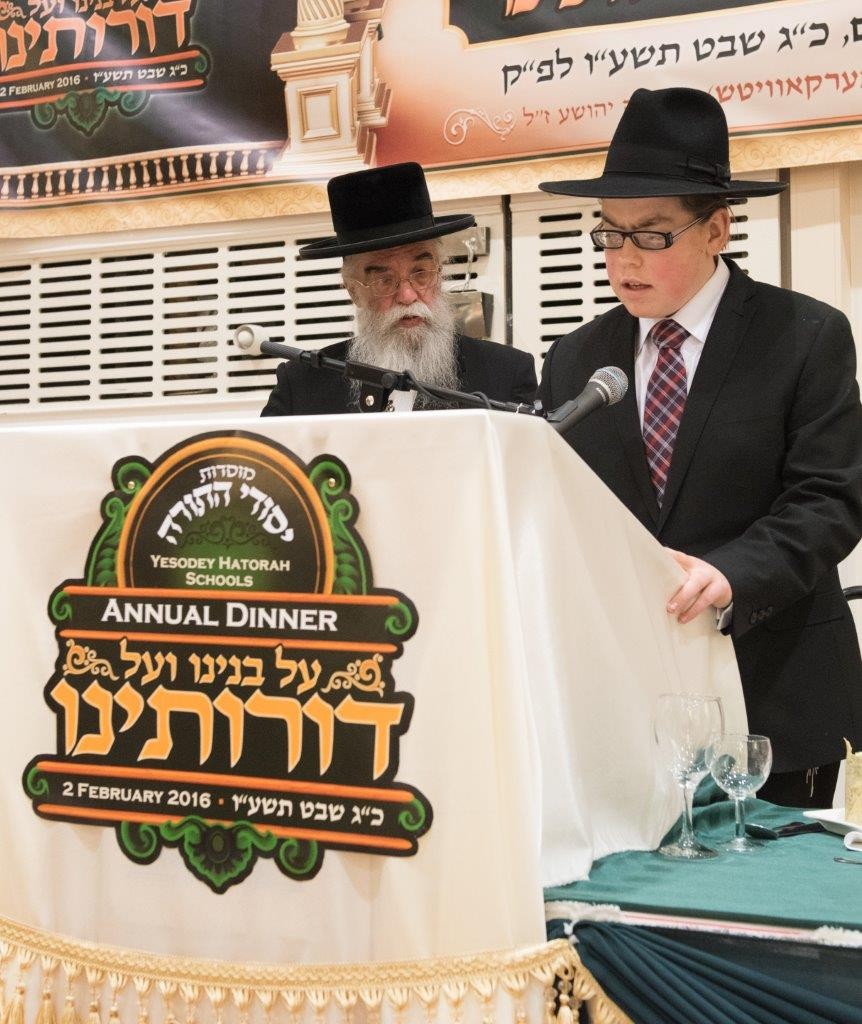 Yesodey Hatorah Hall in Stamford Hill was filled with admiring parents, supporters and friends in support of Yesodey Hatorah Mosdos’ annual dinner last Tuesday. The evening was dedicated in memory of Reb Kalman Berkowitz, z”l, a longtime supporter of the mosad and patriarch to many of its past and current pupils.

Chairing the evening was Reb Dovid Margulies, an alumnus of the mosad, who shared a personal insight into Yesodey Hatorah and its significant status in the kehillah. Mosdos Yesodey Hatorah was founded 74 years ago by Rav Yissochor Pardes, zt”l, the Shotzer Rebbe, zt”l, and Rav Shmuel Yosef Rabinow, zt”l, and was for 50 years under the legendary leadership of Rav Shmelke Pinter, zt”l, Rav of Bikovsk, whose two esteemed sons, ybl”c, Rav Chaim Pinter and Rav Avrohom Pinter took over the reins and are continuing in their father’s unwavering tradition.

The proceedings continued with a siyum made by a talmid of the oldest class. Kaddish was then recited by Reb Naftuli Berkowitz, in memory of his father.

Divrei brachah were delivered by the Mara d’Asra, Harav Ephraim Padwa, shlita, who then graced the full dais of Rabbanim with his presence.

Speaking as a proud parent in the school, Rabbi Shmuel Ludmir, Rav of Cheshev Sofer Pressburg, shared how he personally noticed the earnestness of YHS pupils learning with enthusiasm outside school hours. He also spoke about the renowned qualities of Reb Kalman Berkowitz, z”l, who is sorely missed by the kehillah.

Following was a brief address by Rabbi Shmuel Leitner, a maggid shiur in the senior department, who enlightened the audience about the daily activities within the school and how meticulously it is run to ensure utmost success for every pupil.

The evening’s guest speaker, Rabbi Pinchos Breuer, shlita, Rosh Yeshivah of Yeshivas Knesses Eliyahu in Eretz Yisrael, then delivered his keynote speech. He gave a heartwarming account of his own experience as a talmid in the school some 60 years ago, portraying a vivid image of its early days and how it has amazingly flourished to become a mosad which boasts 1350 pupils between the Talmud Torah and girls’ school department, as well as carrying its pupils from nursery through high school, and even a seminary in the girls department.

The evening was greatly enhanced by beautiful musical accompaniments provided by the Neranenu choir from Ashdod, coupled with the local talent of singer Shloime Gertner, also a parent in the mosad, and Elozor Landau on the piano, all lending to the warm and uplifting atmosphere of the dinner. Gourmet catering was provided by Wassertzug.

Wrapping up an inspiring evening was a raffle drawing for a megillah, followed by Birkas Hamazon. Rabbi Zishe Hochhauser was honored with bentching.