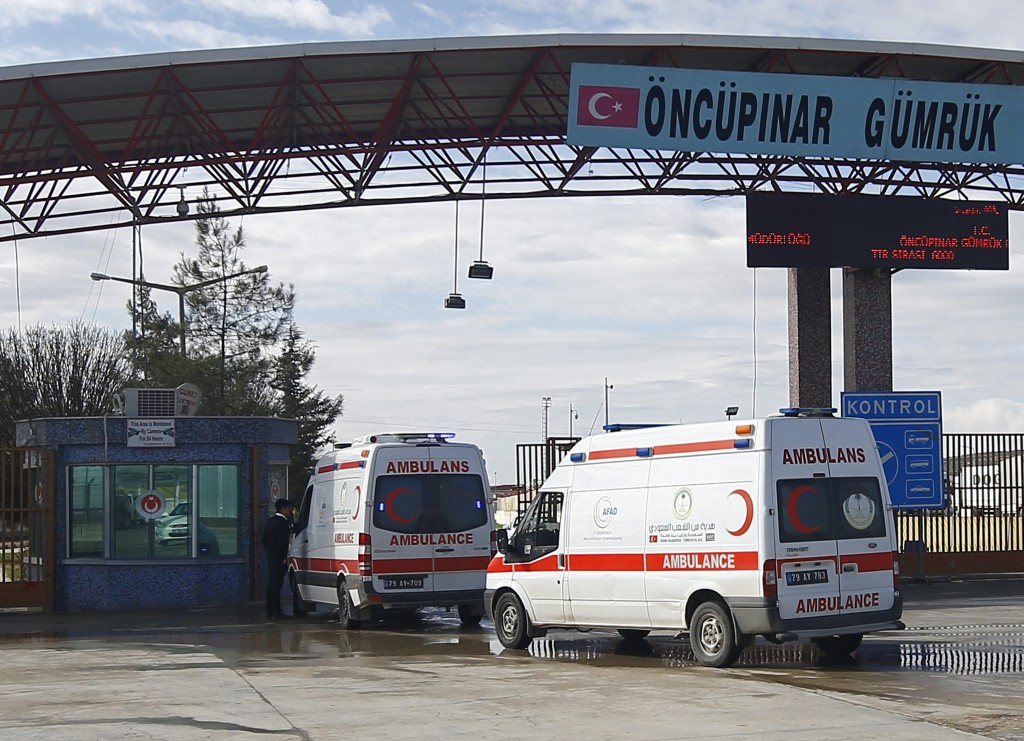 Aid trucks and ambulances entered Syria from Turkey on Sunday to help tens of thousands of people who have fled an escalating government assault on Aleppo, as airstrikes targeted villages on the road linking the city to the Turkish border.

Rebel-held areas in and around Aleppo, Syria’s largest before the war, are still home to 350,000 people, and aid workers have said they could soon fall to the government.

The Syrian Observatory for Human Rights, which monitors the war, said airstrikes, thought to be from Russian planes, hit villages north of Aleppo on Sunday including Bashkoy, Haritan and Anadan, the latter two near the road to Turkey.

Russia’s intervention has tipped the balance of the war in favor of President Bashar al-Assad, reversing gains the rebels made last year. Advances by the Syrian army and allied militias, including those with Iranian fighters, are threatening to cut the rebel-held zones of Aleppo off from Turkish supply lines.

“In some parts of Aleppo, the Assad regime has cut the north-south corridor … Turkey is under threat,” Turkish President Tayyip Erdogan was quoted by the Hurriyet newspaper as telling reporters on his plane back from a visit to Latin America.

Turkey has given refuge to civilians fleeing Syria throughout the conflict, but is coming under growing pressure from the United States to secure the border more tightly, and, from Europe, to stem the onward flow of migrants.

It is already sheltering more than 2.5 million Syrians, the world’s largest refugee population.

But at the Oncupinar gate, which has been largely shut for nearly a year, the newest arrivals were being shepherded into camps on the Syrian side, where Turkey says they are safe for now. The local governor of Oncupinar said on Saturday that around 35,000 had reached the border in the space of 48 hours.

“If needed, we will let those brothers in,” Erdogan was quoted as saying.

Aid officials at Oncupinar said they were focusing for now on getting aid to the Syrian side of the border, where Turkish agencies have set up new shelters.

“We’re extending our efforts inside Syria to supply shelter, food and medical assistance to people. We are already setting up another camp,” an official from the Turkish Humanitarian Relief Foundation (IHH) told Reuters.

At a camp at Bab al Salama, on the Syrian side of the border, children played in the muddy lanes between rows of tents lashed by rain. Some were ripped and caked with mud, but others appeared to be newly set up.

A flag of the opposition Free Syrian Army fluttered over the road leading out toward the Syrian city of Azaz, along which many of the displaced have traveled in recent days. Opposition fighters armed with Kalashnikovs wandered nearby.

“Syria is finished now,” said Dilel Cumali, who has been sleeping at the camp for the past month. “All we want is to get inside Turkey.”

Taking full control of Aleppo would be a huge strategic prize for Assad’s government in a five-year conflict that has killed at least 250,000 people across the country and driven 11 million from their homes.

“Assad teaming up with Russia is trying to annihilate us,” said Kasim, 21, an opposition fighter lying in a hospital in the Turkish town of Kilis, one of a few dozen wounded combatants and civilians let in through Oncupinar in recent weeks.

“But they won’t succeed. I will get better and go back to war and fight to the last drop of my blood to see Bashar toppled.”

While areas to the northwest of Aleppo are held by Syrian opposition forces and Kurdish groups, the territory to the northeast is held by the Islamic State terrorist group.

The Observatory said there had been fierce clashes in that area, and state media said government forces had wrested a strategic hill in the eastern Aleppo countryside from Islamic State.

Erdogan said Turkey’s armed forces had the full authority to counter any threats to its national security, although senior officials have said the NATO member does not intend to mount any unilateral incursion into Syria.

Syria’s foreign minister said on Saturday it would send any invading forces home “in coffins.”