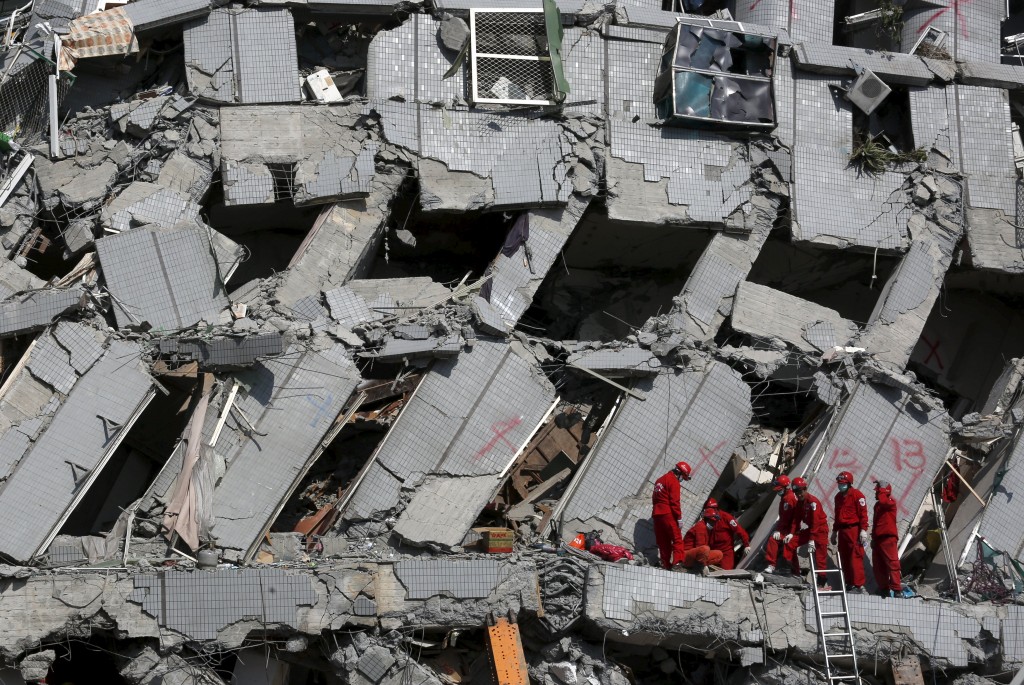 Rescuers in Taiwan pulled out more survivors from a collapsed apartment tower on Sunday, a day after a strong earthquake shook the island, and kept searching for about 120 people still believed to be trapped in the ruins of the building.

Those found alive include a 20-year-old identified by Taiwan media as Huang Kuang-wei and another man in his 20s surnamed Kuo, who was able to walk out from the rubble, supported by rescuers. Both were sent to the hospital.

Firefighters, police, soldiers and volunteers combed through the ruins, some using their hands, as dozens of the victims’ family members, who wore thick jackets, woolen hats and scarves on the chilly morning, looked on.

“She’s not answering my phone calls … I am trying to hold my emotions and stay strong. I’ll do that until I find her,” said a woman surnamed Chang, 42, waiting to hear from her 24-year-old daughter who lived on the fifth floor of the complex.

“Nothing matters but to get her out. The lady living across the hallway was rescued yesterday. I know they will find her, but I have also planned for the worst. It’s been more than 20 hours now.”

At least 23 people are known to have died in the quake, which struck at about 4 a.m. on Saturday, including 16 found in the collapsed Wei-guan Golden Dragon Building in the southern city of Tainan.

Around 120 people are still trapped beneath the rubble of the commercial-residential block, with most them trapped deep in the wreckage, the government said.

Bodies continue to be found, including those of two sisters, aged 18 and 23, Taiwanese media reported.

The building’s lower floors pancaked on top of each other in the 6.4 magnitude quake and then the whole structure toppled, raising immediate questions about the quality of materials and workmanship used in its construction in the 1990s.

Speaking earlier in the day, Tainan Mayor William Lai told reporters that efforts were being focused on 29 people who were closest to the rescuers, with lighter equipment like drills being used.

“The other 103 are believed to be at the lower floors of the building, and we can’t find an accessible route to those areas at the moment.”

The extent of the damage to the Golden Dragon Building has raised questions.

Liu Shih-chung, Tainan city government deputy secretary general, said media footage of its ruins suggested the possibility of structural problems related to poor-quality reinforced steel and cement. However, city officials have said it is too early to say for certain if poor construction was a factor in the collapse.

Authorities said the building had 96 apartments and 256 registered residents, though more people were inside when it collapsed.

Rescuers wearing red and yellow overalls pulled more than 240 survivors from the ruins and inserted huge supports under slabs of leaning concrete as they searched for additional survivors.

Buildings in nine other locations in the city of 2 million people had collapsed and five were left tilting at alarming angles.