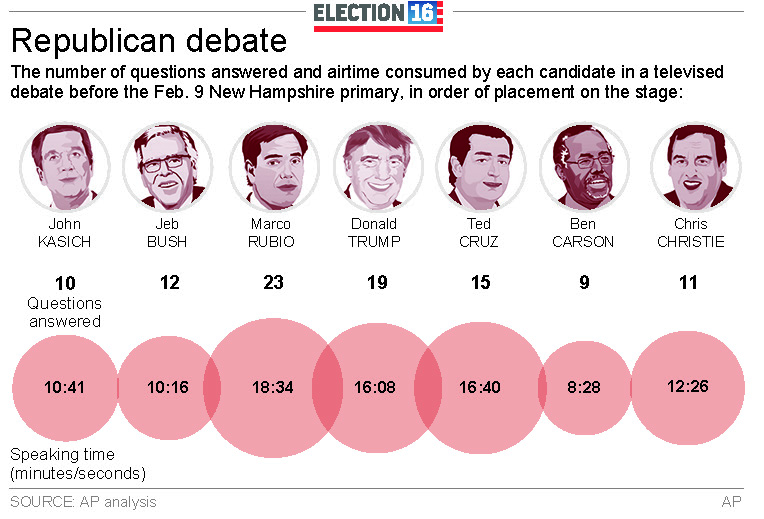 There were a number of fumbles from the field in the intense confrontation before Tuesday’s New Hampshire primary.

-In his zeal to condemn the Obama administration’s immigration record, Ted Cruz once again vastly overstated deportations under the previous two presidents.

Some of the claims and how they compare with the facts:

CRUZ on why his campaign spread inaccurate suggestions to voters on Iowa caucus night that Carson was quitting: “My political team saw CNN’s report, breaking news, and forwarded that news to our volunteers.”

THE FACTS: Cruz’s campaign took accurate reports from CNN and twisted them to make it appear that Carson was quitting. The motive: to convince caucus-goers that support for Carson would be wasted and they should back the Texas senator instead. Even while apologizing to Carson for the tactics, Cruz tried to deflect blame.

CNN on air and in tweets said Carson, in an unusual move, planned to go home to Florida after the caucuses, instead of directly to New Hampshire to campaign for the next contest. But that information was coupled with assurances from the Carson campaign that he was not getting out of the race, but rather planning to attend the National Prayer Breakfast in Washington after Florida.

Based on that, the Cruz campaign pushed out its own story line, saying Carson would reportedly “stop” campaigning after Iowa and would be “making a big announcement next week.” In addition, a key Cruz supporter, Rep. Steve King, tweeted that Carson was planning “the equivalent of suspending.” Candidates who quit a primary race “suspend” their campaigns.

THE FACTS: Far from it. The U.S. tax burden pales in comparison with that of other industrialized countries.

Taxes made up 26 percent of the total U.S. economy in 2014, according to the 34-nation Organization for Economic Cooperation and Development. That measure looks at the entire tax burden, which is different than tax rates that can be gamed through loopholes, deductions and credits.

In Sweden, the tax burden is 42.7 percent of the economy. It’s 33.6 percent in Slovenia (Trump’s wife, Melania, was born in the part of Yugoslavia that became Slovenia). Britain clocks in at 32.6 percent, while Germany’s burden is 36.1 percent.

Where is the tax burden lower than the United States?

THE FACTS: One generally recognized definition, of the United Nations Torture Convention, does not limit the meaning of torture to physical, disabling pain. It defines torture as “severe pain or suffering, whether physical or mental,” and mental anguish is at the core of waterboarding, which simulates drowning and now is banned by the U.S. Even so, there is no consensus that waterboarding, for all its severity, constitutes torture in legal terms.

The U.N. convention, for example, says suffering inflicted as part of “lawful sanctions” may not fit the definition of torture.

Cruz would not rule out restoring waterboarding as president. He said it would not be commonplace, and he would not let low-level officers do it.

THE FACTS: Statistics from Immigration and Customs Enforcement show that roughly 1.6 million were deported under Bush, not 11 million. Under Clinton, about 870,000 immigrants were deported, not 12 million, according to the Migration Policy Institute. So far, about 2.4 million have been deported under the Obama administration.

To get the swollen figures, Cruz appears to be combining deportations with arrests made by the Border Patrol in the previous administrations, according to the institute.

RUBIO: “Under Chris Christie’s governorship of New Jersey, they’ve been downgraded nine times in their credit rating. This country already has a debt problem, we don’t need to add to it by electing someone who has experience at running up and destroying the credit rating of his state.”

THE FACTS: Incomplete, perhaps, but Rubio is right that the state’s credit rating has been downgraded nine times since Christie took office, a reflection of concern by the major rating agencies about New Jersey’s fiscal health and pension system. It did not go down nine notches, however. Each of the three major agencies downgraded the state’s rating three times.

CHRISTIE: “The president and his former secretary of state are for paying ransoms for hostages. When (you) do that, you endanger even more Americans around the world to be the subject of this type of hostage-taking and illegal detention.”

THE FACTS: President Barack Obama said exactly the opposite in June, when the White House reaffirmed its opposition to paying ransom to terrorist groups that hold American citizens hostage.

The president said such payments only serve to endanger more Americans and finance “the very terrorism that we’re trying to stop” – points that Christie actually echoed during the debate.

Though the new White House policy precludes ransom payments by the U.S. government, the Obama administration did leave open the door to communication with hostage-takers – whether by the government, families of victims or third-parties – and said relatives who on their own decide to pay ransom won’t be threatened with prosecution.

RUBIO on fighting the Islamic State group: “The Kurds are incredible fighters and they will liberate the Kurdish areas, but Kurds cannot and do not want to liberate and hold Sunni villages and towns.”

THE FACTS: The Kurds are overwhelmingly Sunni. Rubio did not distinguish between Sunni Arabs and Sunni Kurds. The areas predominantly held by IS fighters are in Sunni Arab territory. They did infiltrate Kurdish regions in both Iraq and Syria, but it is problematic to paint this picture with a broad sectarian brush.