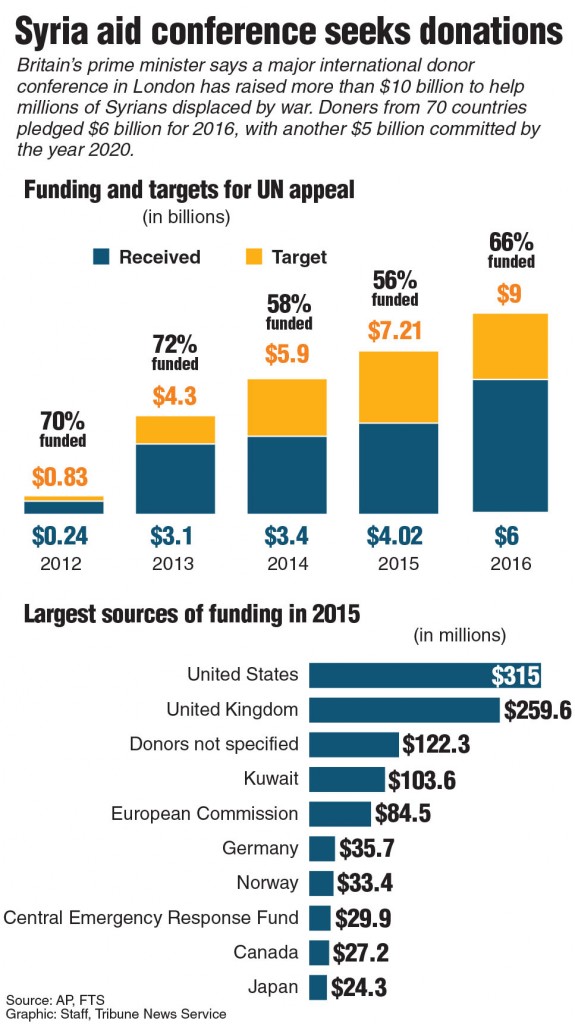 The United States will donate more than $925 million in aid for Syrian refugees, “the most complex humanitarian emergency of our time,” Secretary of State John F. Kerry said Thursday.

Speaking at a donors conference in London that gathered representatives of about 70 countries to confront the crisis, Kerry noted after nearly five years of fighting that has killed more than 200,000 people and displaced millions, “the situation on the ground is actually worse, not better.”

The conference was overshadowed by the apparent breakdown in peace talks in Geneva, where delegations from the Syrian government and some opposition groups had gathered under United Nations auspices. The talks ended almost before they began.

Staffan de Mistura, the U.N. envoy, portrayed the halt as temporary and said he hoped the negotiators would meet again on Feb. 25. But neither side seemed very amenable.

Kerry said the new U.S. aid includes more than $600 million in food, shelter, water, medical care and similar relief for refugees from the war, and an additional $325 million in development assistance, directed primarily at youths in refugee camps in Jordan and Lebanon.

The United States is already the largest donor of humanitarian aid to victims of the Syrian conflict, providing about $4.5 billion in food, water, medical care and other assistance since the civil war began in 2011.

Kerry urged the international community to increase aid overall by 30 percent, calling on at least 10 countries who have never donated before to pledge now.

By the day’s end, British Prime Minister David Cameron said $6 billion had been pledged for 2016.

Kerry acknowledged that providing aid for refuges was only a stop-gap measure and that ending the conflict had to be the world’s priority.

He said he had engaged in a “robust” conversation with his Russian counterpart, Sergei Lavrov, a day after the State Department condemned Russian airstrikes near the Syrian city of Aleppo that killed civilians and interrupted routes used to deliver humanitarian aid.

In a statement, Kerry called on Syrian President Bashar Assad and his supporters, which include Russia, “to halt their bombardment of opposition-held areas, especially in Aleppo, and to lift their besiegement of civilians.”