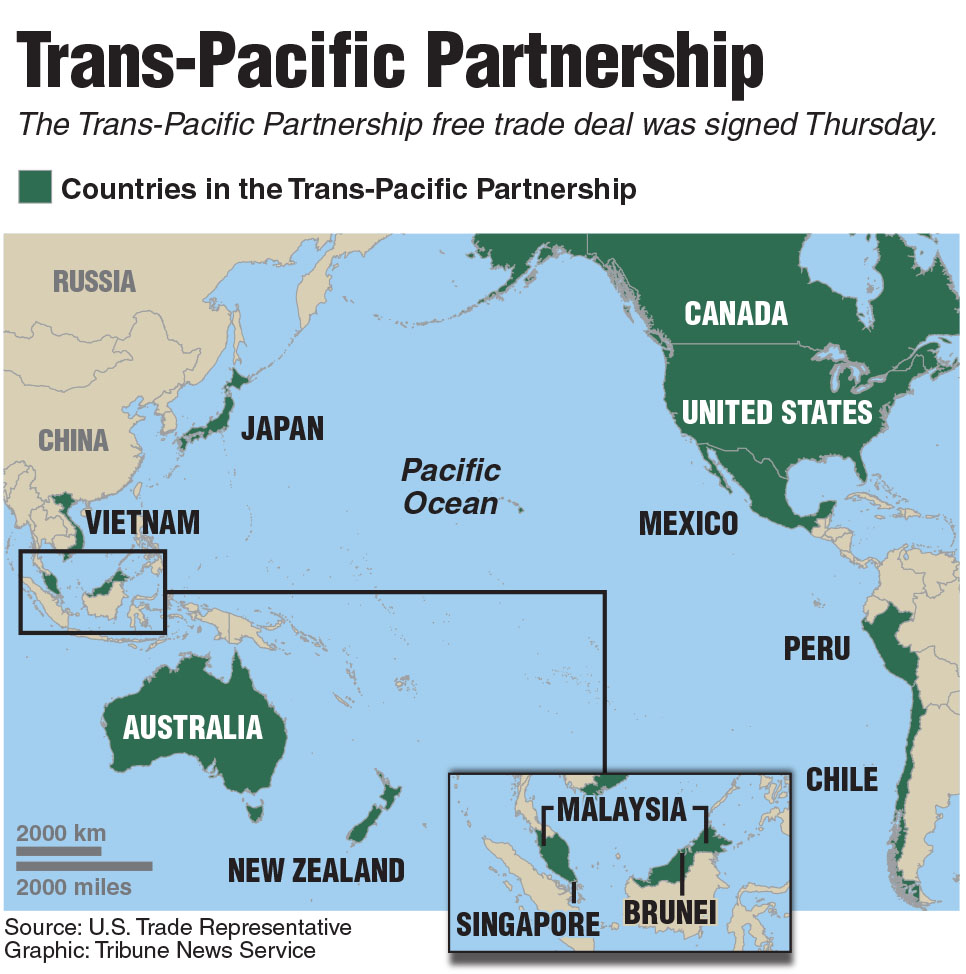 Representatives of the United States and 11 other Pacific Rim nations on Thursday formally signed a sweeping free trade agreement reached last fall, setting in motion what is expected to be a hard battle for approval in national legislatures, none more contentious than in the United States.

Michael Froman, President Barack Obama’s chief trade negotiator, beamed as he walked onstage during a signing ceremony in New Zealand, but back home it is looking increasingly unlikely that a congressional vote on the deal will take place by summer. Major presidential candidates continue to pan the accord, and even leaders of the GOP — the party of free traders — have shown only lukewarm support for what Obama has made his top economic priority in the second term.

“I have some problems with the agreement,” Senate Majority Leader Mitch McConnell (R-Ky.) told reporters Tuesday, reiterating comments he has made since the text of the accord was released in November. “With both the Democratic candidates for president opposed to the deal and a number of presidential candidates in our party opposed to the deal, it is my advice that we not pursue that, certainly before the election.

“And some would argue that it’s not fair to the voters for them not to consider what you might do after the election,” he added, suggesting the possibility of a congressional vote during the short lame-duck session in November and December.

The Trans-Pacific Partnership agreement was concluded last October in Atlanta after more than five years of negotiations. The accord would be the largest regional trade pact in the world, binding together economies that make up nearly two-fifths of global economic output by eliminating duties on thousands of goods and setting uniform rules on intellectual property, labor rights, the environment and other areas affecting trade and investment across borders.

So far, only Malaysia has ratified the agreement. Representatives of Mexico and Australia indicated Thursday that it would be months, possibly year-end, before debate would be concluded and a final vote taken up by their respective lawmakers. The other countries are Brunei, Canada, Chile, Japan, Peru, Singapore, Vietnam and New Zealand.

Some nations will be waiting first for action in the U.S., where vehement opposition to the deal from Democratic lawmakers and many others has cast doubts about whether the Obama administration can bring the agreement to implementation. Obama’s hopes for enacting the legacy-making accord have been complicated by presidential campaign politics — free trade is hardly a populist issue — and more recently by the stormy global economic climate and the possibility of an economic slowdown in the U.S.

“The economy is going to grow more slowly; everybody’s ratcheted down their forecasts,” said Peter Moroci, a University of Maryland professor and former chief economist at the U.S. International Trade Commission. “It makes it more difficult to sell that thing,” he said of the trade accord. “When people aren’t doing well economically, they’re more fearful of change.”

In recent weeks Froman and other Obama administration officials have been working on Capitol Hill and across the country to highlight what they see as the significant overall economic gains for the country in expanding foreign markets for American-made goods and services. Obama has argued repeatedly that the Pacific pact is also critical in strengthening American political leadership in the face of a rising China.

U.S. business groups have been generally slow and somewhat reserved in their endorsement of the deal, though that may soon change. “In the weeks ahead, the chamber will be ratcheting up its advocacy for the TPP,” said John Murphy, senior vice president for international policy at the U.S. Chamber of Commerce.

Organized labor and other opponents of the partnership, including various health, environmental and consumer groups, have been campaigning hard against it for months. “We’re definitely mobilizing now,” said Thea Lee, deputy chief of staff at the AFL-CIO. She wouldn’t say whether the labor group was targeting certain lawmakers, as it did last year during a fight over a fast-track trade bill vote. Obama narrowly won that battle, enabling him to wrap up the Pacific trade negotiations and to present the accord to Congress for a straight up-or-down vote, with minimal delay and no amendments.

Analysts say Obama isn’t likely to submit the Trans-Pacific Partnership as legislation to Congress until he is confident that it will be approved by both chambers. The president is also expected to wait until the International Trade Commission, an independent federal agency, releases an assessment of the deal’s economic effects. That report is due by May 18.

A study by the Peterson Institute for International Economics, a private think tank, has estimated that the trade pact would boost annual real incomes of Americans by $131 billion, or 0.5 percent of U.S. economic output, by 2030. But another study, by researchers at Tufts University, found significantly smaller income gains to the U.S. and said that the Pacific trade accord would likely lead to employment losses and increases in inequality.