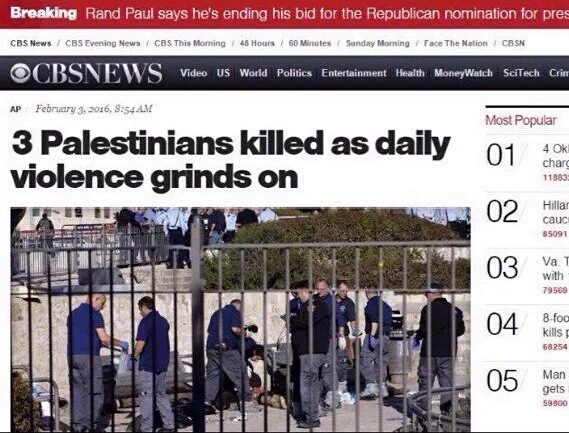 CBS News received a bulletin from Israel’s Foreign Ministry on Wednesday, calling its coverage of the murderous attack in Yerushalayim’s Old City “horrible” and “unparalleled chutzpah.”

“3 Palestinians killed as daily violence grinds on,” read the initial CBS headline, giving the impression of a one-sided attack on Palestinians, with no indication of their attack on Israelis, which left a 19-year-old Border policewoman dead and another wounded.

Foreign Ministry spokesman Emmanuel Nachshon denounced the “horrible headline” as “biased and dishonest,” and an example of “unparalleled chutzpah.” He said the ministry was working to “correct” the headline.

CBS did not issue any statement or response to queries over the headline.

After biased coverage of a terror attack on a synagogue in Yerushalayim in November 2014, for which CNN apologized, the Foreign Ministry circulated a directive to its delegations around the world urging them to immediately protest to media outlets distorting reports about the attack.  (The CNN headline read, “4 Israelis, 2 Palestinians dead in Jerusalem,” failing to note that the two Palestinians were the terrorists.)

Nachshon at the time said that “tendentious reports and lies are meant to distort the reality, to defame Israel and in practice (if not always by intent) give a back-wind to terror.”