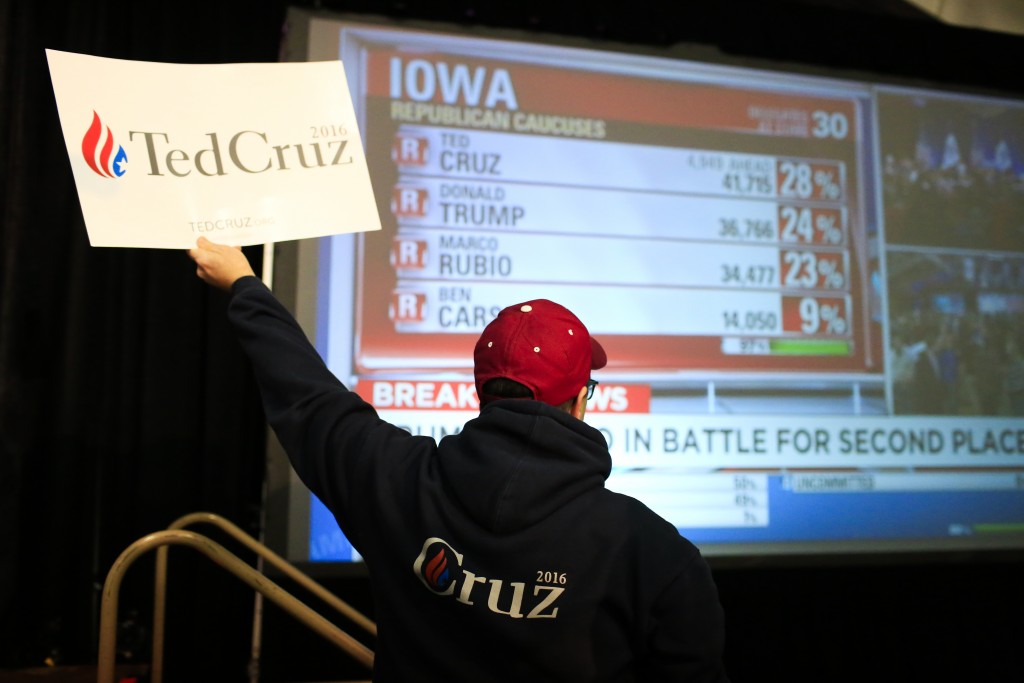 Powered by enormous support from very conservative voters, Ted Cruz surged past expectations to capture a victory in the Iowa caucuses on Monday night.

Cruz earned the support of 4 in 10 “very conservative” voters in the state, a group which made up 40 percent of the electorate according to preliminary entrance poll data. Cruz was also backed by 1 out of every 3 evangelical voters — an important victory in a group that was nearly two-thirds of the electorate.

Donald Trump may have been hampered by two unexpected factors: Weaker than expected performance among new voters and a late surge by Marco Rubio. In the last Des Moines Register/Bloomberg poll in Iowa, Trump led Cruz among first-time caucus-goers by 16 points. On Monday night, Trump’s margin among this group was closer to half that.

Rubio earned about as much support from new voters as did Cruz. and was the preferred candidate of about 3 in 10 Iowa Republicans who made up their minds in the last week.

Nearly half of Republican caucus-goers report making their final decision in the week before the caucuses, and the entrance poll shows Rubio performed best among this group. Nearly 3 in 10 of final-week deciders supported Rubio; he garnered about as much support among those deciding in January, but only about 1 in 10 of those who decided earlier than those who backed Rubio.

Cruz leads among evangelical Christians, who made up over 6 in 10 Republican caucus-goers, their largest share of the vote in recent cycles. Cruz garnered about one-third of the evangelical vote, compared with just over 2 in 10 each for Rubio and Trump. Trump’s margin was similar among non-evangelical Republicans, though they made up fewer than 4 in 10 caucus-goers, lower than 2012 or 2008.

Preliminary entrance poll results show Ted Cruz dominated among Republicans who identify as “very conservative,” a group which made up about 4 in 10 caucus-goers. Cruz garnered over 40 percent of their support, doubling Trump at about 2 in 10 and Rubio slightly below that level. The other large ideological group in the contest were “somewhat conservative” Republicans; Cruz won only about 2 in 10 of their votes, but neither Trump nor Rubio assembled a wide winning margin among this group, with neither surpassing 30 percent support. Trump performed best with moderates, but they accounted for just 14 percent of the GOP electorate.

First-timers show up, but not all for Trump

Trump’s energetic rallies have brought many newcomers to engage in the primary race, and nearly half of Republican caucus-goers said it was their first time participating in the caucuses, up from 2012. But only about 3 in 10 of these newer voters said they arrived at the caucuses to support Trump — roughly 1 in 5 supported Cruz and a similar number backed Rubio, while Carson also garnered about 10 percent support from newcomers. Among seasoned caucus-goers, who made up a slight majority of voters, Cruz led Trump by about 10 percentage points.

These are preliminary results from a caucus poll of voters as they entered randomly selected caucus voting places in Iowa on Jan. 3, 2012. The Republican entrance poll results are based on 1,013 interviews, while Democrats are based on 1,079 interviews. The poll was conducted by Edison Media Research for National Election Pool, The Washington Post and other media organizations. The results for typical characteristics have a margin of sampling error of plus or minus four percentage points.