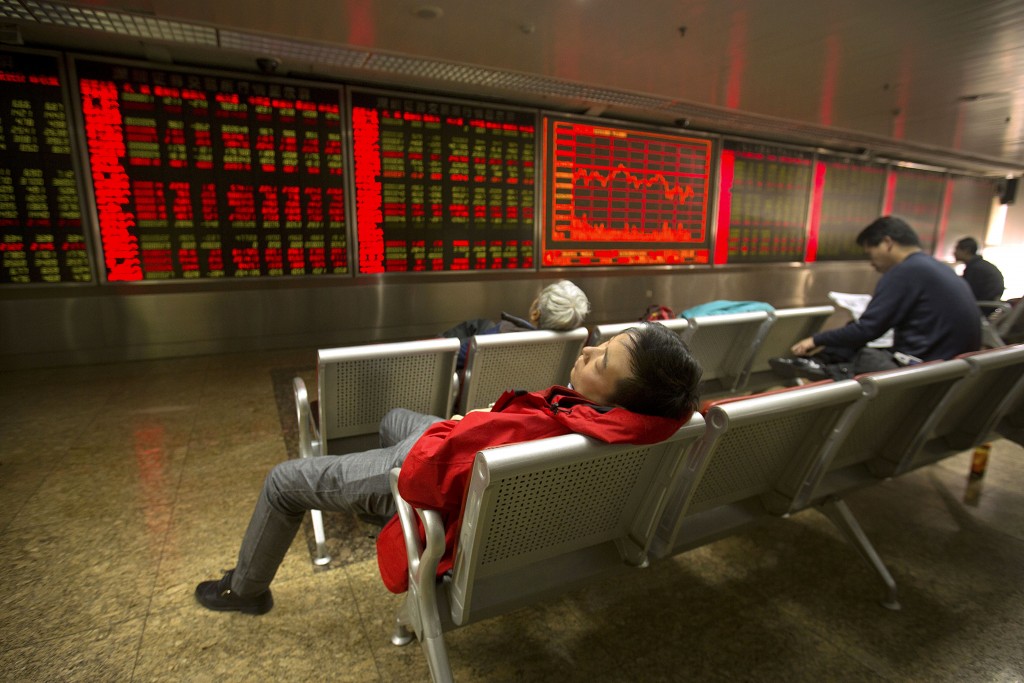 Chinese shares tumbled lower on Monday after an official measure of activity in the giant factory sector fell to its lowest since mid-2012, offering no respite for markets from the country’s economic drift.

The Shanghai Composite Index eased 1.8 percent, while the CSI300 index of the largest listed companies in Shanghai and Shenzhen lost 1.5 percent.

The official version of the PMI survey for manufacturing slipped to 49.4 in January, from 49.7 the month before and short of forecasts of 49.6.

While the miss was minor, the PMI for services also disappointed by easing to 53.5 and challenged hopes that consumption would take over from industry as the driving force for the world’s second-largest economy.

“The manufacturing sector will likely face a tough year ahead on the back of overcapacity, weakening global demand, and government’s plans to tackle pollution,” said ANZ’s chief Chinaeconomist, Li-Gang Liu.

The Australian bank expects Beijing will have to ease policy further, including a cut in banks’ reserve requirements sometime in the next two months.

Equity and bond markets globally had rallied on Friday after the Bank of Japan stunned many by cutting its rates into negative territory for the first time.

That did not stop January from being the worst month since October 2008 for China’s stock markets, with 12 trillion yuan ($1.8 trillion) sliced off the value of its benchmark indexes. The CSI300 and the Shanghai Composite indexes fell more than 20 percent each in January.

“Last year, the China market was propped up by the government, but now, it’s hard to find natural buyers,” she said. Any slight rebound would be used by investors as a chance to sell and so reduce their financial exposure.

The downtrend risks are becoming a vicious cycle, as those who have used shares as collateral for loans or have bought stocks with borrowed money are forced to meet margin calls or sell up.

The dangers are multiplied by the vast scale of the shadow banking system, an opaque network of trust companies and non-bank lenders.

Mid-tier Chinese banks are increasingly using complex instruments to make new loans or restructure existing ones that are then shown as low-risk investments on their balance sheets, masking the scale and risks of their lending.

The size of this “shadow loan” book rose by a third in the first half of 2015 to an estimated $1.8 trillion, equivalent to 16.5 percent of all commercial loans, a UBS analysis shows.

Concerns are not just focused on stocks. The Shanghai Stock Exchange has warned several securities firms to strengthen risk control in their corporate bond and asset-backed securities (ABS) businesses, two sources with direct knowledge of the matter said.

Bond issuance has skyrocketed in the past year as firms took advantage of easier regulations and falling yields.

The People’s Bank of China (PBOC) has managed to calm fears of an imminent devaluation of its yuan by holding its midpoint, a reference point for trading, rock steady day after day.

The Monday fix of 6.5539 per dollar was just a whisker softer than Friday even though the dollar had climbed broadly elsewhere in the wake of the Bank of Japan’s easing.

Still, many analysts suspect the currency will be allowed to move lower over time, and some funds are actively betting on it.

Chinese state-run media have carried repeated warnings to offshore speculators against trying to profit from a yuan devaluation.

Such reports will only heighten the focus on the PBOC’s reserves position, due to be reported some time this week, for details on just how much intervention has been needed to shelter the yuan from capital flight.