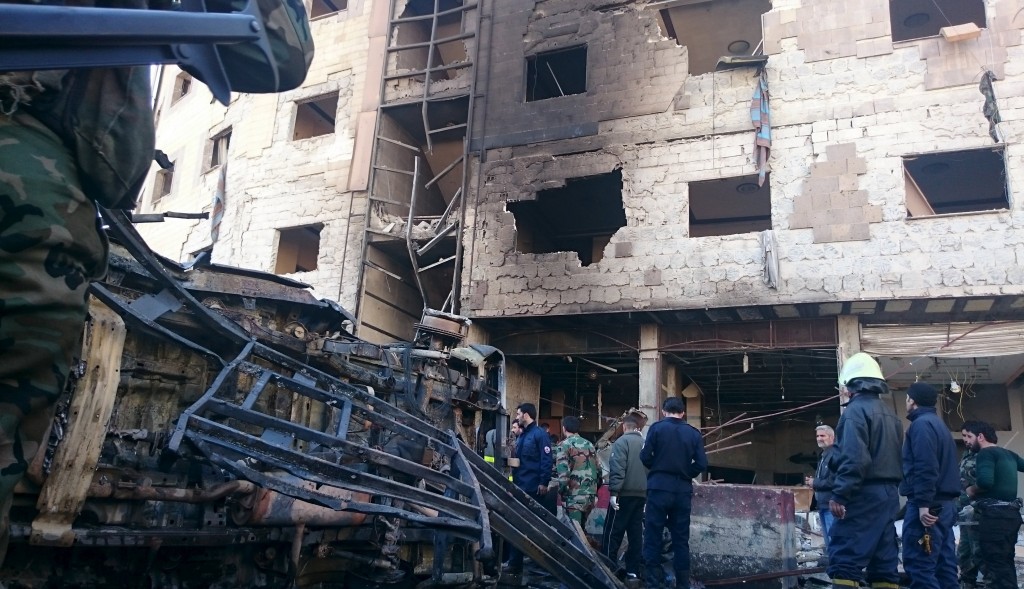 A triple bombing claimed by the extremist Islamic State terrorist group killed at least 45 people near the Syrian capital of Damascus on Sunday, overshadowing an already shaky start to what are meant to be indirect Syria peace talks.

Syria’s state news agency SANA said that the blasts went off in Sayyda Zeinab, a predominantly Shiite Muslim suburb of the Syrian capital. SANA said attackers detonated a car bomb at a bus stop and that two suicide bombers set off more explosives as rescuers rushed to the area.

The Britain-based Syrian Observatory for Human Rights, an opposition group that monitors both sides of the conflict through a network of activists inside Syria, said at least 47 people were killed in the explosions, and that the death toll was expected to rise because a number of people were seriously wounded.

An IS-affiliated website said the blasts were carried out by members of the extremist terrorist group, which controls large areas in both Syria and Iraq.

U.N.-hosted peace talks in Geneva are part of a process outlined in last month’s U.N. resolution that envisions an 18-month timetable for a political transition in Syria, including the drafting of a new constitution and elections.

The talks got off to a rocky start Friday, with U.N. Special Envoy to Syria Staffan de Mistura meeting only with a Syrian government delegation.

A delegation of the main opposition group said it will not take part in the indirect talks until its demands are met, including lifting the siege imposed on rebel-held areas and an end to Russian and Syrian bombardment of regions controlled by opposition fighters.

“It’s the duty of the responsibility of members of the Security Council to put the pressure on Russia to stop these crimes in Syria,” opposition spokesman Salem al-Mislet told The Associated Press on Sunday.

“It’s enough killing our children, killing civilians. They pretend to fight terrorism. In fact they don’t fight terrorism because they bring terrorism there and ISIS is spreading in many areas in Syria more than before because of these Russian strikes,” al-Mislet said, using an alternative acronym for the Islamic State terrorist group.

The opposition delegation is to meet with de Mistura later Sunday, al-Mislet said.

Ahrar al-Sham and the Army of Islam, two Islamic groups fighting to overthrow Assad, agreed to take part in the Geneva talks. The ultraconservative Ahrar al-Sham is not part of the team sent to Geneva, but the delegation has named Army of Islam official Mohammed Alloush as its chief negotiator.

Assad’s government has long referred to all those fighting to overthrow him as terrorists, but has agreed to negotiations with some armed groups in the latest talks.

A U.N. Security Council resolution adopted last month tasked Jordan with compiling an agreed list of terrorist organizations that would be excluded from the talks. Work on the list is still underway.

While virtually all parties agree that both IS and the al-Qaida-affiliated Nusra Front should be excluded, the two sides are divided over Ahrar al-Sham and the Army of Islam. The mainstream opposition views both groups as fellow rebels, despite their ideological differences, while the Syrian government and its close ally Russia view them as extremists.

“We will neither sit down directly with terrorists, nor have dialogue with them,” Syrian Information Minister Omar al-Zoubi told state media Saturday evening.