Israel U.S. Dusts Off Labeling Law for Products From Yehudah and Shomron
Israel 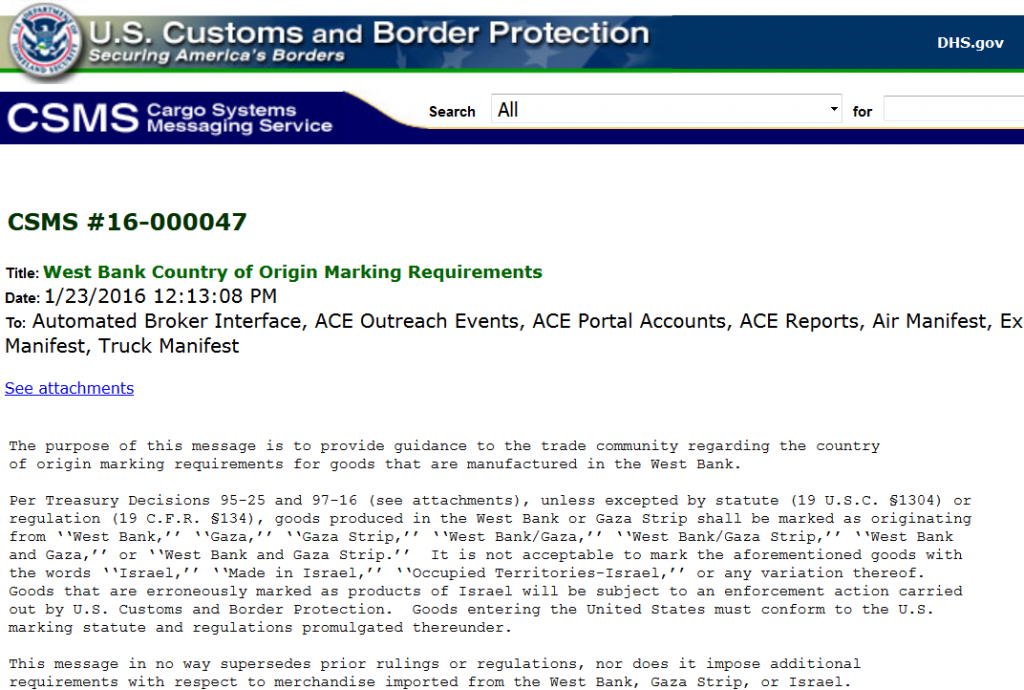 At a time when Israel has been fighting for months against a European Union guideline requiring labeling of produce coming from over the Green Line, it emerged on Thursday that the United States has a law on the books which says essentially the same thing, and intends to enforce it.

The United States has sent a notice to the import/export community that all products made in Yehudah and Shomron must be labeled as “West Bank,” and not “Made in Israel.”

The notice, which was issued by U.S. Customs and Border Protection on January 23, was actually nothing new. It was intended merely as a reminder to businesses that the regulation, which went into effect in 1995, was still in effect, and that businesses which fail to comply will be subject to a fine of 10 percent of the product’s value.

By contrast, the EU rule does not obligate member states to impose the labeling restriction, and carries no penalty.

As an article on the subject in The Forward pointed out on Thursday, the regulation has been lying dormant, “barely enforced, if at all,” and few people knew about it. The Customs message makes it clear that this has been U.S. law since 1995, though it gave no explanation for why it was felt that a reminder was needed at this time.

“The purpose of this message is to provide guidance to the trade community,” the Customs note, posted on the agency’s on-line announcement board, states. It stresses observes that it “in no way supersedes prior rulings or regulations, nor does it impose additional requirements” on products from the West Bank, Gaza or Israel.

Katrina Skinner, an agency spokeswoman, said the agency does enforces the rule, though she would not comment on specific cases.

“On average, CBP receives from 800 to 1,000 e-Allegation submissions from the public each year. Each allegation receives a thorough analysis and enforcement actions are recommended, if warranted,” she said. She would not say if punitive measures have ever been taken against offenders.

The purpose of the regulation originally was not to harm or stigmatize Jewish growers in Yehudah and Shomron. Rather, it was meant to encourage Palestinian exports following the 1993 Oslo Accords, which envisioned a Palestinian state. It would thus enable them to market their goods to America under their own name, rather than having to mark them “made in Israel.”

This government reminder in 2016, though, might have been the result of pro-Palestinian lobbies, such as the U.S. Campaign to End Israeli Occupation, which have been calling attention to the unused regulation.

The group’s policy director Josh Ruebner wrote in December that enforcing the existing Customs regulation would be “an important and necessary step to put teeth behind five decades of rhetorical yet feckless U.S. opposition to Israel’s illegal settlements.”

Be that as it may, the leading pro-Israel lobby, AIPAC, says it is not concerned about the Customs regulation.

“This long standing Customs policy, in contrast to the actions of the European Union, was not intended to stigmatize Israeli products but to merely facilitate duty free access to the U.S. market for Palestinian goods,” said AIPAC spokesman Marshall Wittman. “It does not distinguish among manufacturers in the territories.”