Israel PM: We Want to Be Friends With All – Greece, Cyprus and Turkey
Israel 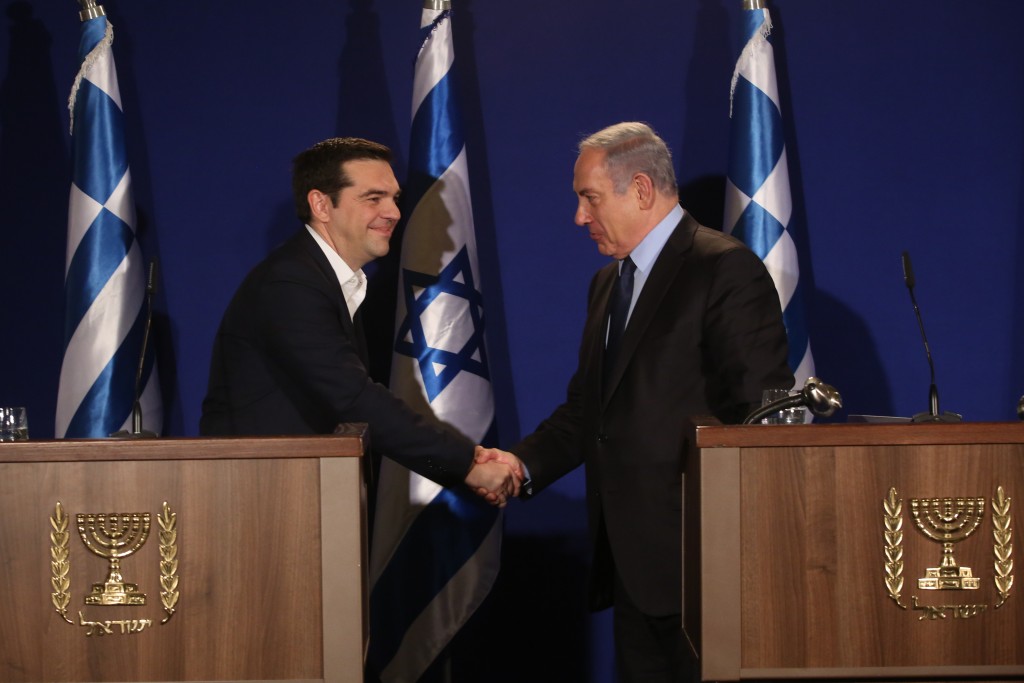 Israel will continue to develop its relationship with all of its Mediterranean neighbors – Greece, Cyprus and Turkey – and relate to each country in the appropriate manner, Prime Minister Binyamin Netanyahu said Wednesday, on the eve of a historic meeting set for Thursday with Greek Prime Minister Alexis Tsipras and Cyprus President Nicos Anastasiades in Nicosia. The purpose of the meeting, which reflects the tighter relations between the three countries, said the prime minister’s office in a statement, is “to establish a permanent framework for countries that share similar worldviews, values and interests in order to strengthen stability in the eastern Mediterranean basin and advance regional prosperity.”

In recent years, and especially since the tension between Israel and Turkey, Israel has developed stronger relations with Greece. At a meeting with Tsipras Wednesday celebrating 25 years of diplomatic relations between the two countries, Netanyahu pointed out that the two countries have already developed strong ties in areas such as defense, cyber security and counterterrorism, as well as in economics, trade, energy and innovation. “At this government to government meeting we will take further steps to strengthen this partnership,” Netanyahu said.

One of the purposes of Thursday’s tripartite meeting is to work out ways for all three countries to benefit from the large gas fields in the Mediterranean. Both Israel and Cyprus have discovered large offshore gas fields, and both are looking to Greece to help transport that gas to the European mainland. Speaking to Tsipras, Netanyahu said that the three countries were committed to developing a plan to use the gas, as well as connecting Israel, Cyprus and Greece with an electricity cable “which will, for the first time, enable Israel to diversify its electricity grid and even export gas through electrical energy,” the prime minister’s office quoted Netanyahu as saying. “We are going to discuss water, environment, agriculture, public safety and emergency responses, transportation, maritime affairs, tourism – many other areas.”

By meeting with the two leaders, political analysts on Channel One said, Israel was sending a message to Turkey – that it was not isolated, and had “options.” Formerly a close ally of Israel, Turkey sharply reduced its engagement in Israel after the 2010 Mavi Marmara incident, in which IDF soldiers killed nine Hamas-affiliated activists who attempted to attack IDF soldiers as they illegally sought to enter the waters off Gaza. Since then, diplomatic relations have improved, but at a snail’s pace. With that, Israeli trade with Turkey is as robust as ever, with 2015 recorded as the biggest year ever for trade between the two countries.

Neither Greece nor Cyprus have any great affection for Turkey, both because of historic enmity and because of Turkey’s continued support of Northern Cyprus, which its army has been occupying and propping up as a separate entity from Cyprus since 1974.

In a statement at the conclusion of his meeting with Tsipras, Netanyahu said that Israel’s relationship with each country would be taken on its own basis. “Our cooperation with Greece and Cyprus stands on its own,” Netanyahu said. “While we believe that it should have happened some time ago, we are pleased by the current progress. It does not depend on our efforts to normalize our relations with Turkey.

“We are trying to do this,” the prime minister added. “I do not know if we will succeed but I think that we will continue our efforts to do so. We must ensure that Israel’s interests are upheld. Turkey and Israel have had excellent relations in previous years. We did not want to see them deteriorate and we did not cause this deterioration in relations. We will welcome any change in policy.”