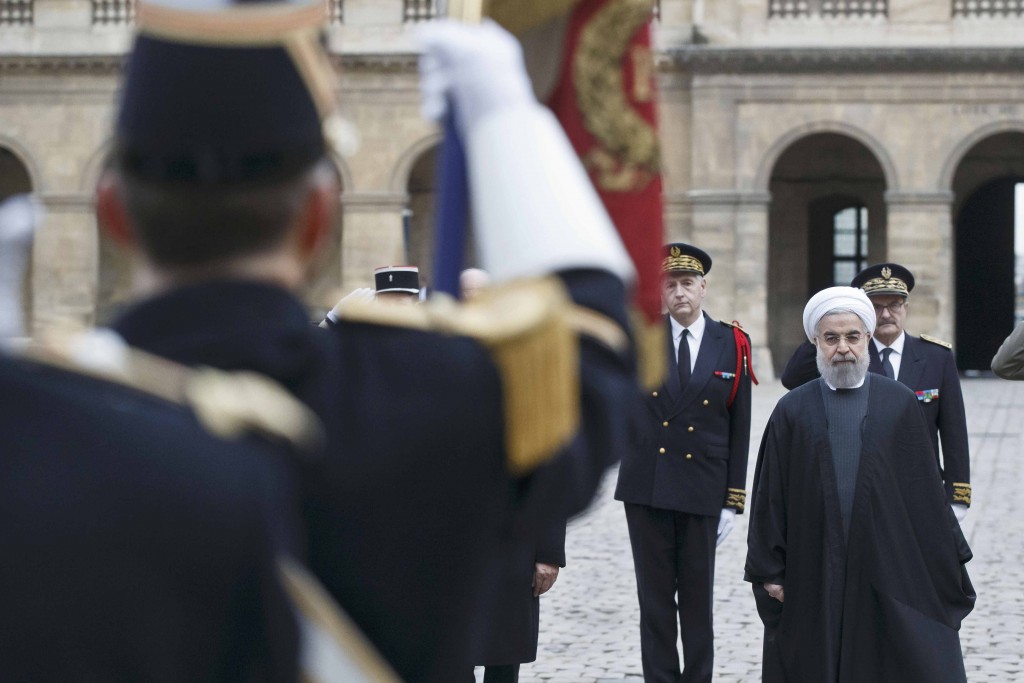 France welcomed Iranian President Hassan Rouhani on Thursday with a lucrative car-making agreement and pledges to boost trade after a diplomatic deal easing nuclear tensions — but clouds hung over the historic trip.

France has asked its European Union partners to consider new sanctions on Iran for its recent ballistic missile tests, officials have told the Associated Press. The possibility highlights continued suspicions between Iran and the West despite the recent agreement curbing Iran’s nuclear program that prompted the lifting of earlier sanctions.

Rouhani arrived in Paris on Wednesday from Rome, where billions of euros worth of trade deals were reached, and was formally greeted in France on Thursday morning at the monument where Napoleon is buried.

Rouhani’s visit was also met with protests, notably over recent executions in Iran. But the thrust of the trip was about improving economic and diplomatic relations after years of hostility.

“France is available for Iran,” French Prime Minister Manuel Valls said alongside Rouhani and a large group of high-level French executives whose companies are interested in resuming trade with the long-isolated nation of 80 million people.

Later, Rouhani and French President Francois Hollande will oversee a ceremony for signing about 20 bilateral accords.

France’s Peugeot-Citroen announced a joint venture with automaker Iran Khodro to make 200,000 cars a year outside Tehran. Carlos Tavares, chairman of the PSA Peugeot-Citroen managing board, said it will be a 50-50 joint venture, aiming to produce three new models of cars starting late next year.

“We must go beyond those wounds” caused by sanctions, Tavares said. Peugeot was a major player in Iran’s car market before the sanctions were imposed.

Paris also wants to draw Tehran into a role as peacemaker in a Middle East that is fraught with civil war in Syria, where Iran has played an active role in support of President Bashar Assad, and in Yemen.