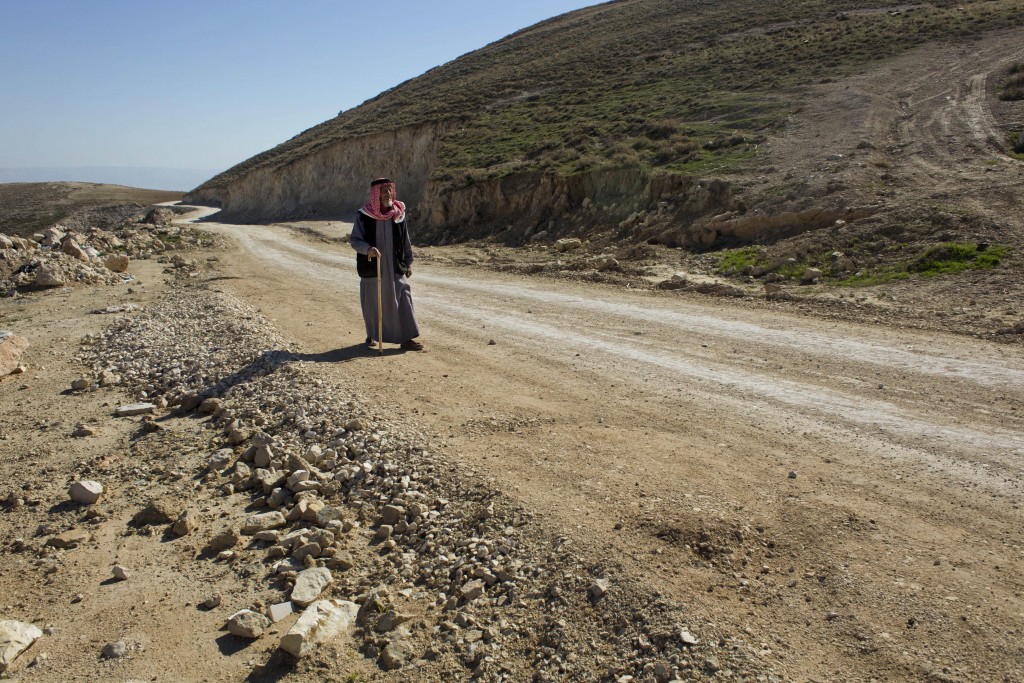 A narrow country road outside Yerushalayim has turned into a new battleground between Israel and the European Union, deepening a dispute over Israeli construction in Yehudah and Shomron.

The EU is financing the paving of the dirt road by Palestinians as part of a broader effort to help them develop their local economy. Israel, however, says the roadwork is illegal because it was done without Israeli permits and has ordered it to stop.

The dispute goes far beyond the 4-kilometer (2.5-mile) road. At issue is the future of portions of Yehudah and Shomron known as “Area C,” the 60 percent of the territory that remained under full Israeli control as part of interim peace accords two decades ago. Its ultimate fate has been a major contention point in peace talks between Israel and the Palestinians.

The international community has urged Israel to freeze Israeli construction and lift restrictions on Palestinian development in Area C.

In the maze of lines created by the Oslo accords, Area C divides up the territory under Palestinian control into isolated enclaves. Under the accords, that division was supposed to be temporary, with much of Area C to be transferred to Palestinian control, but with the breakdown of the peace process that never happened.

Last week, the EU Foreign Affairs Council said a change of policy by Israel in Palestinian areas, and particularly Area C, “will significantly increase economic opportunities, empower Palestinian institutions and enhance stability and security for both Israelis and Palestinians.”

The EU runs dozens of projects in Area C. The Israeli government views these efforts with great suspicion and often demolishes projects it says are illegal.

Between January and May 2015, for instance, 41 EU-funded structures that cost some 236,000 euros ($255,000) to build were torn down by Israel, the EU’s commissioner for aid and crisis manager, Christos Stylianides, recently told the European Parliament.

Those are the most recent figures available from the EU. But the dispute seems to be worsening. In a meeting with foreign journalists earlier this month, Prime Minister Binyamin Netanyahu called the EU-funded structures “illegal.”

“They’re building without authorization against the accepted rules and there’s a clear attempt to create political realities there,” Netanyahu said.

Last year, the EU passed a bill requiring Israeli products from Yehudah and Shomron to have special labels if they are sold in Europe. Earlier this month, it said all agreements with Israel must “unequivocally and explicitly” show that they cannot apply to these areas.

The new EU-funded road is meant to help Palestinian farmers gain better access to their land, Palestinians say. The road runs near the Palestinian town of Taqoa, about 8 miles southeast of Yerushalayim.

The Palestinians say that since the road already existed, the project is not considered new construction and there was no need to ask Israel for a building permit, said an official from the Union of Agricultural Works Committee, the Palestinian nonprofit that has been carrying out the work. He spoke anonymously because he was not authorized to discuss the issue with the media.

Ari Briggs, a Regavim official, said his group objects to the construction on security grounds and fears that the Palestinians will expand their presence into settler areas. He accused the EU of “defying” Israeli law and establishing facts on the ground. “This is something that’s illegal,” he said.

The Palestinian union official said 90 percent of the road was completed before the work was halted. He said the union is complying with the order, but is planning a legal challenge.

Ralph Tarraf, the EU representative to the Palestinian territories, said the 28-country bloc will carry on its mission in Area C.

“The EU provides humanitarian assistance to communities in need in Area C in accordance with the humanitarian imperative. And second, the EU also works with the Palestinian Authority to develop Area C and support the Palestinian presence there,” he said last week at a ceremony in Ramallah. Tarraf declined an interview request.

With the battle showing no signs of abating, Netanyahu suggested that Israel and the EU “reset” their relationship on the issue.

He told reporters that he recently met with the EU’s foreign policy chief, Federica Mogherini, in Paris, and told her the sides need to get past their differences.

“I hope we can do this on better terms,” he told her. “We have to figure out a way to resolve this and set things on the right course.”