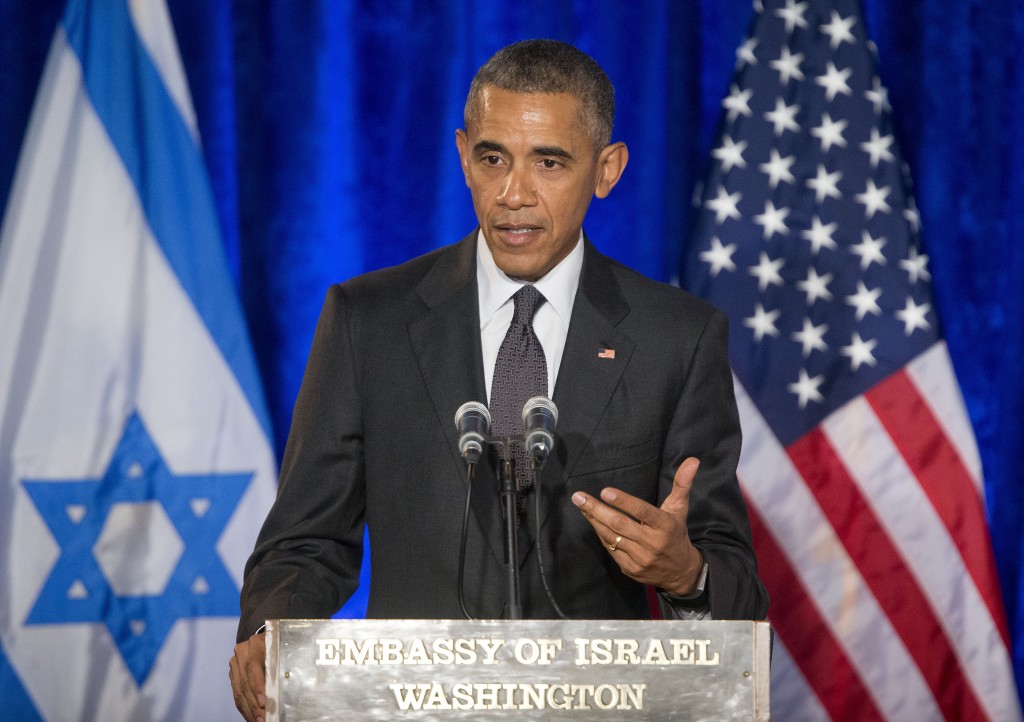 President Barack Obama joined representatives of Yad Vashem and the Israeli embassy on Wednesday evening in honoring four people, including Americans from Indiana and Tennessee, for risking their lives to protect Jews during the Holocaust.

The president addressed the event, as did Rabbi Israel Meir Lau, chairman of the Yad Vashem Council and himself a Holocaust survivor, and other officials of the embassy and Yad Vashem, which is conferring its “Righteous Among the Nations” recognition on the honorees.

“Anti-Semitism is on the rise. We cannot deny it … We must not be silent,” President Obama said during his address.

He continued to add that, too often, especially in times of change, people are too willing to give in to a base desire to blame someone else, someone different, for their own struggles and that all nations that take pride in tolerance must speak out when Jews and other members of religious minorities are attacked.

“The four lives we honor tonight make a claim on our conscience, as well as our moral imagination. We hear their stories, and we are forced to ask ourselves, under the same circumstances, how would we act?” the president said.

Rabbi Lau shared his own moving, personal story and evoked the Torah’s narrative of Basya’s saving of Moshe Rabbenu as the first recorded act of the “righteous among the nations.”

“They serve as a symbol that man can be good even in a period of evil,” he said in reference to the honorees. “We will never forget your deeds and the acts that you took to preserve the eternity of the Jewish people.”

The United Nations designated January 27 as International Holocaust Remembrance Day to commemorate the anniversary of the liberation of the Auschwitz death camp in 1945.

Obama was joining leaders of Jewish organizations at a ceremony Wednesday at the Israeli Embassy in Washington, where the medals were presented posthumously. Ron Dermer, Israel’s ambassador to the U.S., termed Obama’s participation “a worthy tribute to the worthiest among us.”

When asked about his feelings regarding the significance of President Obama’s presence at the event, Rabbi Lau reflected on his impressions of the president’s visit to Yad Vashem in 2008.

“He [President Obama] was very moved and had tears in his eyes,” said Rabbi Lau, who at the time shared recollections of his own liberation from Buchenwald by the United States Army with the president.

Americans Roddie Edmonds of Knoxville, Tennessee; Lois Gunden of Goshen, Indiana; and Polish citizens Walery and Maryla Zbijewski of Warsaw are being recognized by Yad Vashem for protecting Jews from harm during the Holocaust. Since all four are deceased, the awards were accepted by their next of kin.

Righteous Among the Nations is an official title awarded by Yad Vashem, the world’s Holocaust education and research center. It was the first time the ceremony was held in the United States.

Master Sgt. Edmonds participated in the landing of U.S. forces in Europe and was taken prisoner by the Germans. While in captivity, the Germans ordered the captured Jewish POWs at the camp to report. Master Sergeant Edwards, the highest-ranking American non-commissioned officer, ordered all of the U.S. soldiers to stand together, and he announced to the German officer “We are all Jews.” The German officer gave up, and the Jewish soldiers’ lives were saved.

Gunden, a French teacher, established a children’s home in southern France that became a safe haven for children, including Jewish children she helped smuggle out of a nearby internment camp. She protected the children when French police showed up at the home.

The Zbijewskis hid a Jewish child in their Warsaw home until the girl’s mother could take her back.

FOR TRANSCRIPT OF THE SPEECH : ISRAELI EMBASSY