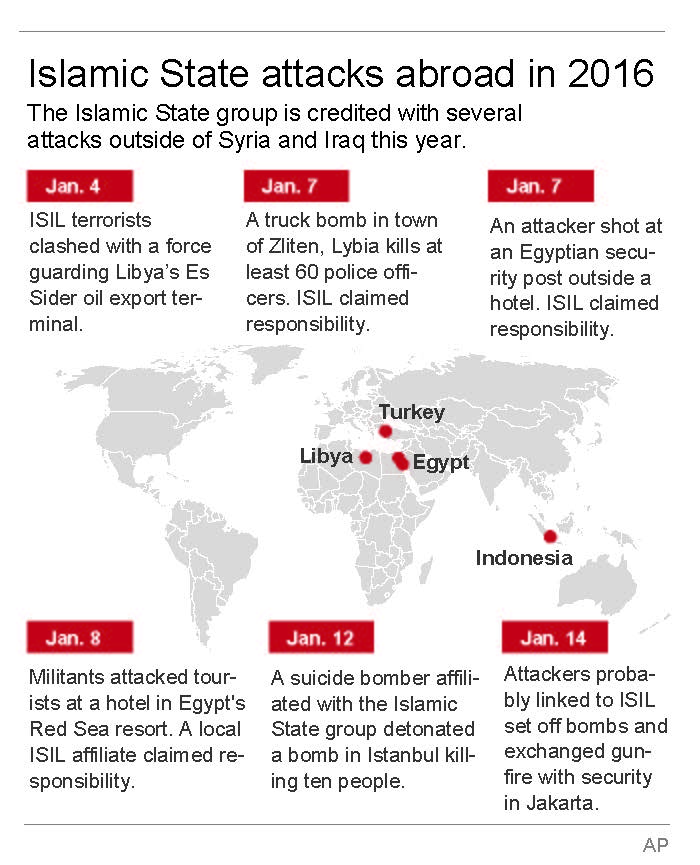 A year before Islamic State declared its caliphate in Syria and Iraq, Abdulmunam Almushawah noticed a disturbing development from more than 1,000 miles away in Saudi Arabia.

The head of a program financed by the Saudi government that tracks jihadi online said he saw new trends emerging among the terrorists as early as 2013. They were forming technical groups to help radicals send encrypted messages. There was a flurry of activity in French, and calls for jihad in Europe were mounting. Two years later, there were massacres in Paris, first at magazine Charlie Hebdo last January and then at multiple targets in November.

“We understood that they had been building today’s reality,” Almushawah said in an interview at his base in Riyadh. “What happens in real life has a previous shadow in the electronic world.”

The U.S. and its allies say they are winning the fight against Islamic State, reclaiming territory over the past year and liberating towns like Kobane in Syria and Ramadi in Iraq. Yet ground is being lost in an area airstrikes can’t reach, a space largely controlled by U.S.-based companies. Executives of social media, with government officials, are now rallying support for a concerted response.

The information gathered by Almushawah encapsulates how tough it is to turn what’s currently hindsight into foresight. The internet campaign by Islamic State helped entice thousands of foreign foot soldiers and inspire lone-wolf attacks.

The one in San Bernardino, Calif., showed how the internet helps “crowdsource terrorism, to sell murder,” said FBI Director James Comey. It involved people “consuming poison on the internet,” he said in a speech two weeks after the December attack.

Almushawah most recently noticed an increase in dialog involving Indonesia. A bomb in Jakarta claimed by Islamic State killed eight people this month.

Islamic State is “the first terrorist organization that has managed to occupy and hold both the physical territory and the digital territory,” Jared Cohen, director of Google Ideas, said in an online presentation last week. The ground war and the war online must be treated the same and it’s up to governments to communicate with companies to find the best way to fight back, he said.

A video apparently released by Islamic State on Sunday purportedly showed the nine assailants who participated in the Nov. 13 Paris attacks in territory controlled by the group before the assaults, while declaring French businessmen and political leaders targets of the group. It was titled: “Kill wherever you find them.”

Social media companies have cooperated with Western intelligence agencies, but have been walking the fine line between helping the fight against terrorism and unleashing a torrent of demands from countries worldwide to delete postings.

Facebook’s chief operating officer, Sheryl Sandberg, said at the World Economic Forum in Davos, Switzerland, that when one Islamic State page is removed, it’s just replaced by another. “The best antidote to bad speech is good speech,” she said, citing an example of neo-Nazis in Germany whose page was undermined by messages of tolerance.

“There’s a new dynamic to the threat in this digital age that demands a new response,” Shields said. “While airstrikes are degrading their positions in Iraq and Syria, (Islamic State) are fighting a second war for the hearts and minds of the next generation, spreading a warped world view.”

As that online reach expanded, so have efforts by law-enforcement agencies to counter it as they did with al-Qaida.

The U.S. this month announced its Countering Violent Extremism Task Force, which will integrate the effort at home, and another organization to work with international partners. The White House said Jan. 8 that President Barack Obama’s security team met with technology companies in California.

The challenge is to snuff out recruitment and incitement on the internet and social media while maintaining enough sources of intelligence to diminish the group’s appeal and foil attacks.

“A victory in cyberspace isn’t necessarily shutting down their presence online,” said Tristan Reed, a security analyst at the strategic advisory firm Stratfor. Winning is using “online activities for the purposes of intelligence,” he said.

Back in Riyadh, Almushawah’s unit, called Assakina, started in 2003 in a country whose own conservative brand of Islam has been blamed for fueling jihad. Fifteen of the 19 perpetrators of the Sept. 11, 2001, attacks on the U.S. were Saudi citizens.

Assakina has identified 200 Islamic State terrorists from the Persian Gulf region and has tailored messages to appeal to each Twitter account based on what they post. For radicals interested in religious edicts, fatwas, the center asked senior clerics to come up with some that contradict Islamic State’s messages.

While there’s a potential for success, the effort still targets only a relative handful of terrorists, Almushawah said. What’s needed is a global approach, he said.