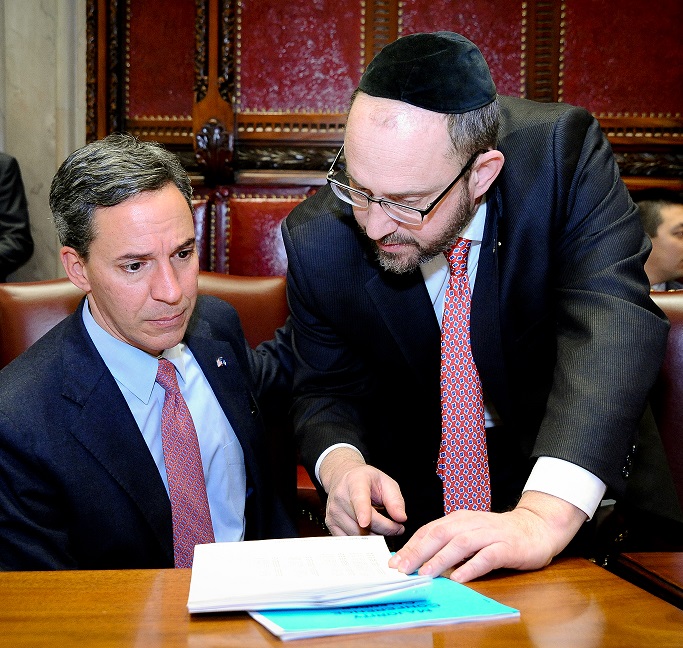 The state Senate has passed legislation prohibiting the state from doing business with companies that seek to economically harm Israel and other U.S. allies through boycotts and discriminatory economic agendas.

The bill, which was sponsored by Sens. Jack Martins (R-Mineola) and Simcha Felder (D-Brooklyn), passed last week Wednesday. It expands existing state law to tackle a small but growing effort by Palestinians to pressure Israel for concessions through the threat of boycotts.

The BDS movement, an acronym for Boycott, Divestment and Sanctions, has taken hold in Europe and some small U.S. enclaves.

“Those who advocate and engage in boycotts against Israel, and who promote anti-Semitic ideology, have no place as a state contractor,” Felder said. “This meaningful legislation protects our nation’s allies, and stands up against bigotry and injustice.”

The state would use publicly available information to develop a reference list of companies, organizations, persons, or other entities that have engaged in or promoted boycotts of American allies. Those on the list would be ineligible to participate as a state contractor or receive state investment in their operations.

“Our tax dollars should not be used to aid those who wish to harm our friends,” Martins said.

The bill now heads to the Assembly, where the prime sponsor is Helene Weinstein, a Democrat from Midwood. Assemblyman Steven Cymbrowitz (D-Brooklyn) is calling for its quick passage.

Previous attempts to pass a bill have been struck down over free speech concerns. The current legislation is framed to avoid such pitfalls.

“This bill would not abridge any element of free speech, but would merely prevent the state of New York from being dragged into a discriminatory agenda directed by those who seek to advance principles that are antithetical to our state, its constitution and its citizens,” Cymbrowitz said.