Technology Virtual Reality Could Be the Next Big Thing in Curing Cataract Blindness
Health, Science & Technology 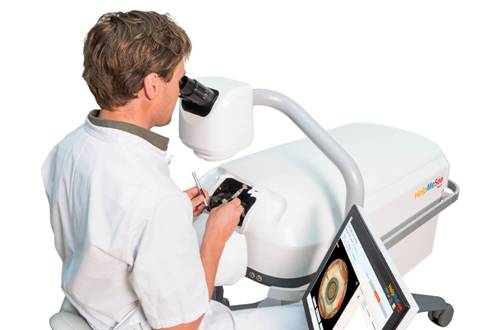 What affects 20 million people, robs the global economy of billions of dollars and can be fixed with a five-minute procedure?

The answer is cataract blindness. The disease, which begins with clouding of the eyes and can lead to loss of vision without treatment, will probably afflict 12 million more people by 2020, as a shortage of skilled doctors limits access to care in developing nations, according to the Rand Corporation.

Jim Ueltschi wants to change that. Through his nonprofit HelpMeSee, he wants to train 30,000 people for a procedure to remove the impairment using a virtual-reality simulator that replicates the human eye and the feel of live surgery. Restoring vision to the “avoidably blind,” the term often used to describe people with cataract blindness, could inject $517 billion into the world’s poor economies over a decade at a cost of $128 billion, according to reports by PricewaterhouseCoopers, commissioned by the Fred Hollows Foundation.

“The chances that these people or any of their descendants will ever see an ophthalmologist in their lifetime is essentially zero,” Ueltschi said in a phone interview. “We have the ability to change the course of this disease by using physics-based simulation to teach people a surgery that could take as little as five minutes and be done at high volume so they can cure thousands every year.”

The operation, known as manual small incision cataract surgery (MSICS), consists of making two small incisions on the eye to loosen and extract the cataract. After a lens is inserted, vision is typically restored. The procedure can be completed in fewer than 20 steps and requires only a trained surgeon, a sterile tool kit and an operating room.

In China, where cataracts blind 400,000 citizens each year, there are as few as five surgeons per million people, the World Health Organization estimated. HelpMeSee plans to begin a trial program there in April. About a hundred students will be trained in MSICS by resident instructors who teach the procedure using HelpMeSee’s simulator in tandem with classroom learning.

“In the clinical way of training, it takes years to create a good surgeon,” said Jean-Marie Andre, a cataract surgeon who established a training partnership through the Aix-Marseille School of Medicine with West Africa and now works as HelpMeSee’s medical officer in Africa. “It’s impossible to train all the doctors needed and then put them in developing countries at this rate. The simulator is a major development because it can make a great surgeon in less than three months.”

Other common procedures that remove cataracts, including phacoemulsification, depend on machinery and uninterrupted power sources not readily accessible in impoverished nations, World Health reported. Lack of equipment and practical knowledge often result in poor outcomes for patients, with some even becoming blind afterward.

Ueltschi said reaching those in need in poor economies depends on finding and training the right candidates for its program. Each graduate will be expected to find patients through networking and conduct a minimum of 1,500 surgeries per year using sterile, prepackaged tool kits provided by HelpMeSee. Doctors will be paid roughly $50 per procedure, depending on location.

Some companies are taking a different approach. BioDigital has created an interactive 3-D model of the human body that allows users to explore the different parts of anatomy and learn the steps of operations through online surgical simulation. The virtual creation is being used to train doctors in underdeveloped nations on corrective surgery for children with cleft lips and palates through international charity Smile Train.

BioDigital Chief Executive Frank Sculli said the company plans to begin working with Cure Blindness to teach cataract surgery through use of the technology in 2016.

“3-D technology is much more effective in educating and training people than any other medium to date because it’s scalable and can be accessed almost anywhere,” Sculli said. “It’s not mainstream in medicine yet because it’s expensive and takes time to develop, though we are moving in the right direction.”

The virtual-reality simulation being embraced by HelpMeSee isn’t yet widely used in medicine, though it’s entrenched in the aviation and aerospace industries.

Ueltschi’s father, Al Ueltschi, co-founded FlightSafety International’s pilot-training schools that use simulators to teach people to fly. Often called the father of modern aviation training, Al Ueltschi began transferring his knowledge in simulation training to the medicinal field prior to his death in 2012 by working with his son to start HelpMeSee.

The challenge now is proving the simulator they’ve created will improve outcomes of operations and reduce surgical complications in the field, said Teodor Grantcharov, a professor of surgery at the University of Toronto.

“We are still trying to understand how the virtual-reality industry works in health care so it can become a real market like it did in aviation,” he said. “If HelpMeSee can show evidence of the outcome of their intervention and give the market an idea of the economic benefits, then there may be a very bright future for it.”