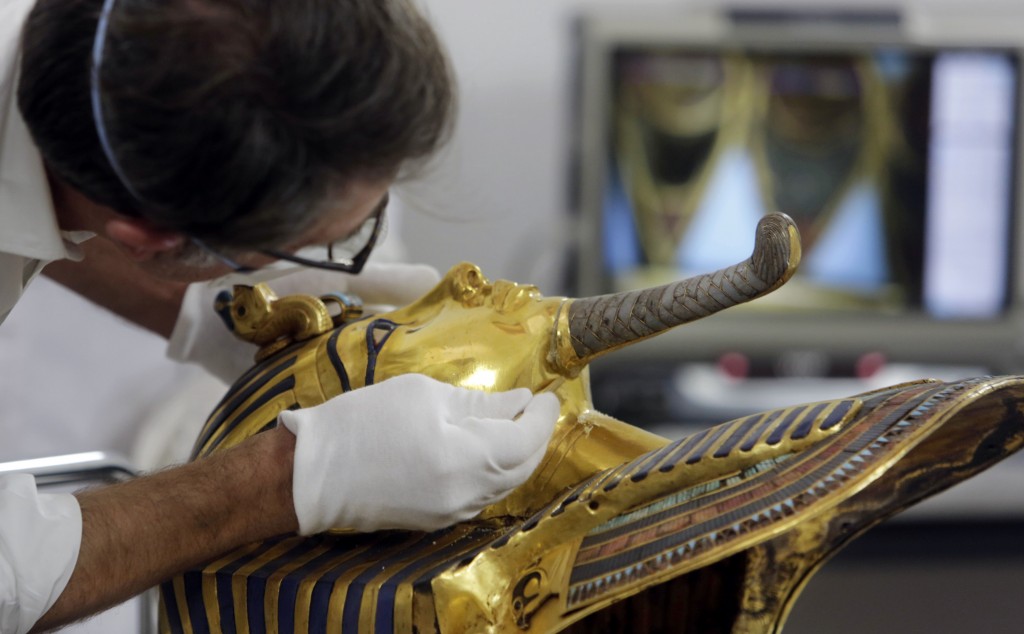 King Tut hasn’t been around for a few thousand years, but his power remains: after a botched repair job of the famed pharaoh’s beard left scratches on his burial mask, Egyptian prosecutors have ordered eight museum workers to a disciplinary court for “gross negligence.”

The 3,300-year-old mask, whose beard was accidentally knocked off and hastily glued on with epoxy in 2014, was scratched and damaged during the amateurish repair work, prosecutors said in a Sunday statement, which implicated the then-head of the Egyptian Museum and the chief of the restoration department.

“In an attempt to cover up the damage they inflicted, they used sharp instruments such as scalpels and metal tools to remove traces of adhesive on the mask, causing damage and scratches that remain,” it said, citing an investigation. The eight now face fines and disciplinary measures including dismissal.

The mask was put back on display last month after a German-Egyptian team of specialists removed the epoxy and reattached the beard using beeswax, used as an adhesive in antiquity.

A year ago, a museum conservator who was present at the time of the repair told the Associated Press that epoxy had dried on the face of the boy king’s mask and that a colleague used a spatula to remove it, leaving scratches. Another conservator who inspects the artifact regularly also saw the scratches and said it was clear that they had been made by a tool used to scrape off the epoxy. They both spoke on condition of anonymity for fear of repercussions.

Restoration specialist Christian Eckmann said shortly thereafter that the cause of a scratch found on the mask had had not been determined, but that it could have been recent.

The mask was discovered in a tomb along with other artifacts by British archaeologists in 1922, sparking worldwide interest in archaeology and ancient Egypt. It is one of the world’s most famous artifacts and the best-known piece in the Egyptian Museum, a major tourist attraction in Cairo built in 1902 that houses ancient Egyptian artifacts and mummies.

Lately, King Tut has been at the focus of new archaeology and media buzz after British Egyptologist Nicholas Reeves theorized that Tutankhamen, who died at the age of 19, may have been rushed into an outer chamber of what was originally Queen Nefertiti’s tomb.