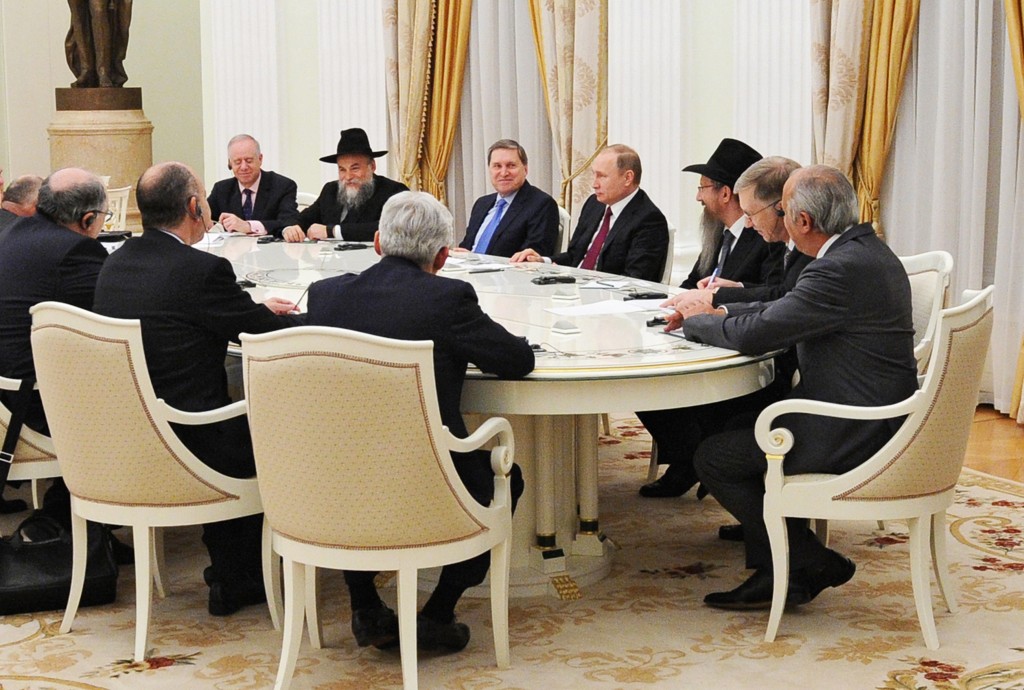 Russian President Vladimir Putin proposed on Tuesday, during a meeting with members of the European Jewish Congress, that Jews facing a rising tide of anti-Semitism and bigotry farther west should move to Russia, where he said they would be better accepted, reported Russia Today.

The European Jewish Congress’s Moscow-born president, Moshe Kantor, had detailed to Putin how anti-Semitic attacks had risen in Europe by about 40 percent each of the past three years and that Jews can no longer safely walk the streets of some major European cities. He blamed the increase of hatred towards Jews on the worsening economic situation in Europe following the global financial crisis of 2008.

Focusing on the tragic events in France last year, Kantor said that “the position of Jews in Europe today is the worst since the end of World War II. Jews [are] gripped by fear and the very real new Exodus of Jews from Europe,” Kantor told Putin.

He said that ultra-right organizations are “springing up like mushrooms” in France, Germany, the U.K., Greece, Hungary, Sweden and Italy. Furthermore, the rise of Islamic extremism in Europe is prompting a mass exodus of Jews from the EU, as some member states can no longer offer adequate protection.

“For example, the emigration flow from France, which only yesterday seemed so safe, is bigger than from Ukraine, [which is] engulfed in civil conflict. Why are the Jews fleeing from Europe? They flee… not only because of terrorist acts against our communities in Toulouse, Brussels, Paris, Copenhagen, now in Marseilles, but because of the fear to just appear in the streets of European cities.”

“They should come here, to Russia. We are ready to accept them,” Putin said in response, according to a transcript provided by the Kremlin.

Kantor called Putin’s proposal a “new fundamental idea” that the Congress will take up for debate.

Kantor appeared a bit taken aback by the gesture, but Putin continued, “They left the Soviet Union; now they should come back.”

Putin has been seen as a friend of the Jewish community and a supporter of Israel. In 2014, Putin was one of the few world leaders to support Israel’s Operation Protective Edge against Hamas, saying, “I support Israel’s battle that is intended to keep its citizens protected.” In 2005, Putin became the first Russian president ever to visit Israel, visiting the Kosel, as well as Israel’s Yad Vashem Holocaust memorial.

Putin returned to Israel in 2012 as the guest of honor at a state dinner and to inaugurate a monument to the Red Army soldiers who defeated Hitler in World War II.

The remarks come at a time of pronounced fear amongst many of Europe’s Jewish communities, rattled both by a rise in far-right activism in the region as well as an influx of Muslim migrants and refugees. Experts say European Jews have not felt so strongly threatened since World War II. Jews have been targeted in Belgium, Denmark and other European countries, but France has seen the worst of it. Jews have increasingly reported assaults and intimidation, mostly from Muslim terrorists.

Just under 10,000 Jews from western Europe immigrated to Israel in 2015 — a record figure, according to the Jewish Agency. The vast majority, close to 8,000, came from France, where a rise in anti-Semitic attacks has shattered the sense of security of the world’s third-largest Jewish population.

Close to 800 Jews have emigrated from Britain in this latest exodus. Italy and Belgium are next on the list.

“That a record number of European Jews feel that Europe is no longer their home should alarm European leaders and serve as a wake-up call for all who are concerned about the future of Europe,” said Jewish Agency Chairman Natan Sharansky of that report.

Russia, of course, has its own long and terrible history of anti-Semitic bigotry and pogroms. As the former Soviet Union crumbled, hundreds of thousands of Soviet Jews used the opportunity to leave between 1989 and 2006, according to Ha’aretz figures. Some 1.6 million Soviet Jews and their relatives opted to move to Israel, while 325,000 migrated to the United States, and roughly 219,000 to Germany.