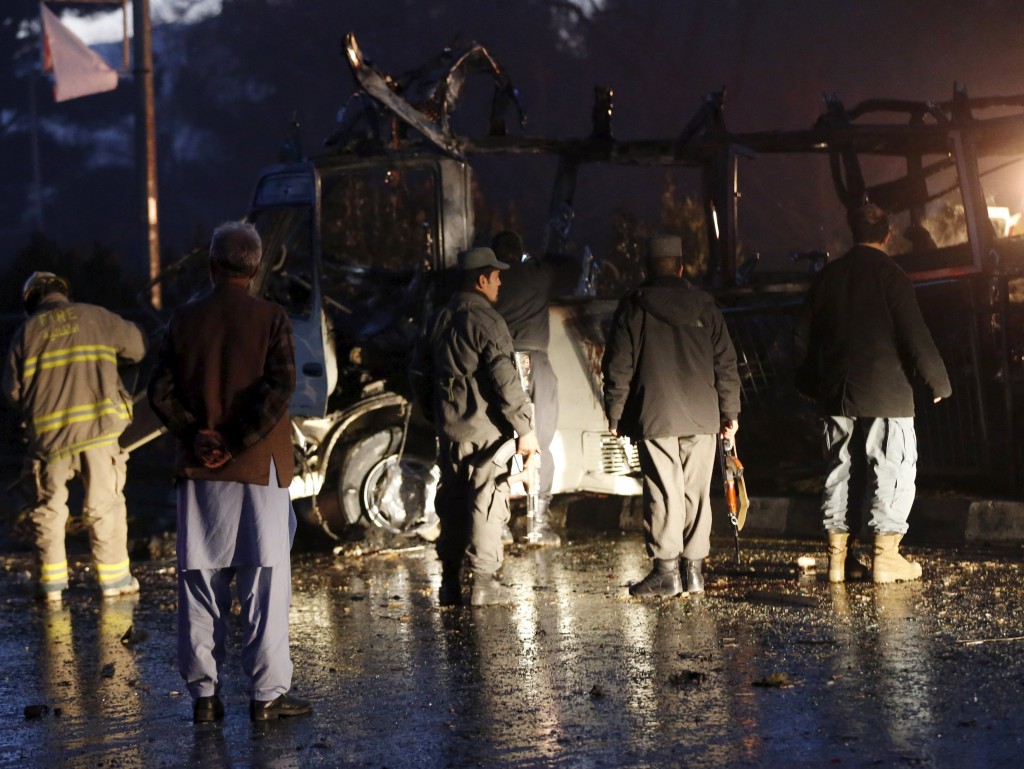 It was the latest in a series of suicide attacks in the Afghan capital that coincide with renewed efforts to revive a peace process with Taliban insurgents that broke down in July.

“Such brutal and cowardly attacks can never stop us serving our country, people and protecting democracy,” said Karim Amini, a reporter for the channel.

Broadcast footage showed the black burned-out shell of the vehicle where fire had torn through the roof and windows.

The Taliban openly threatened to target the media channel last year after it reported allegations of summary executions, kidnappings and other abuses by Taliban fighters during the battle for Kunduz.

The Islamist terrorists briefly captured the northern city in October, their biggest success in the 15-year insurgency, before being ousted by government forces.

The Taliban, who are fighting to topple the Western-backed government in Kabul and reimpose strict Islamic law, said they carried out the attack and issued another grim warning.

“If they do not stop their evil activities this will not be the last attack on them,” Zabihullah Mujahid, a Taliban spokesman, said in an emailed statement.

Tolo News has been one of the most active media operations in the country for years, employing dozens of journalists, many in volatile provinces.

The latest attack adds a dangerous new complication for local journalists working in a country already ranked as low as 122 out of 180 in the World Press Freedom Index, a gauge of media freedom compiled by the group Reporters Without Borders.

At least 25 people were wounded in the bombing, including women and children, police officials said.

The attack took place near the Russian Embassy in west Kabul. The explosion sent smoke billowing into the sky and was powerful enough to be heard miles away.

Kabul has seen at least six bomb attacks since the new year. On Sunday, a rocket landed near the Italian embassy in Kabul, wounding two security guards.

Envoys from Afghanistan, Pakistan, China and the United States met in Kabul this week to explore ways to find a negotiated end to 15 years of war, and urged the Taliban to join peace talks.

Separately on Wednesday, the U.S. government issued a warning that it had received reports terrorists were planning to attack a hotel or guesthouse frequented by foreigners in Kabul.

There was no further information regarding the timing, location or method of attack, the statement said.