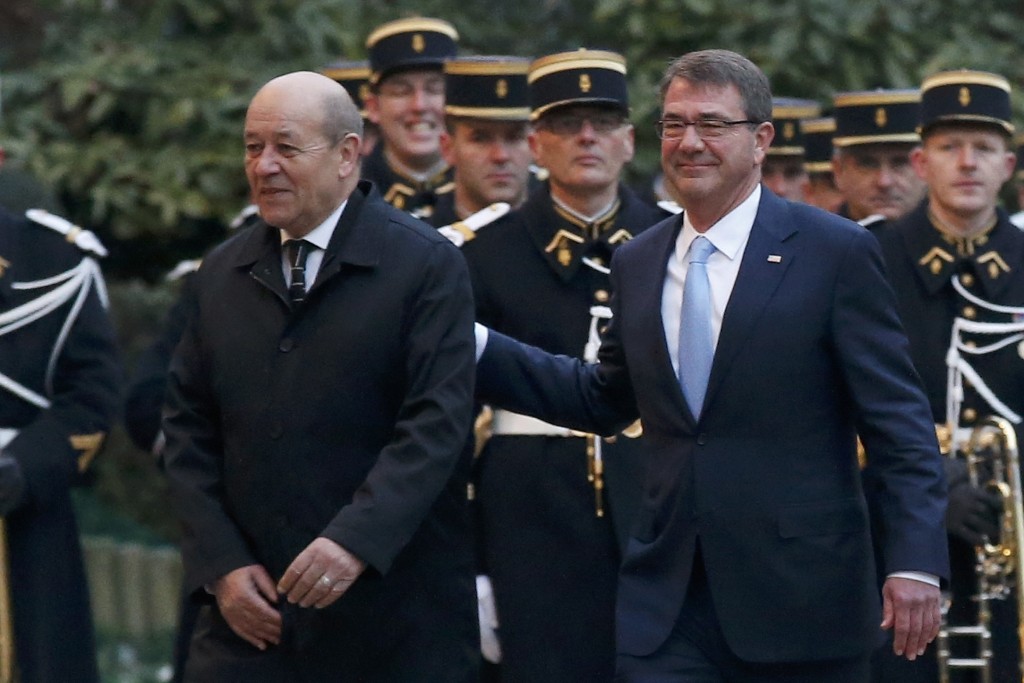 Defense chiefs from the United States, France, Britain, and four other nations meet in Paris on Wednesday to examine ways to increase gains against Islamic State, including ramping up the number of police and army trainers.

U.S. Defense Secretary Ash Carter described the gathering as a chance for face-to-face talks between the key contributors in the U.S.-led coalition, which also includes Germany, Italy, Australia and the Netherlands. “I’ll be soliciting their views and describing to them my thoughts about how we can accelerate the campaign, including the variety of capabilities, military capabilities, that will be required.” Carter predicted increases in the numbers of trainers in the months ahead, including police trainers who guide the forces which help hold territory reclaimed from Islamic State.

In a telling sign, no Arab states from the region are joining this gathering. A senior U.S. defense official acknowledged that many Arab allies are presently occupied with the Saudi Arabian-led campaign against Houthi terrorists in Yemen.

Sunni Arabs accuse the United States of not taking strong enough action against Syrian President Bashar al-Assad. Carter said he and his allies would be discussing how to encourage greater participation on the part of Sunni Arabs, many of whom view the U.S.-backed, Shi’ite-led government in Baghdad with suspicion.

“That’s something I want to hear from my counterparts over the next couple of days,” Carter said candidly. “How can we get them in the game? I have long said that Arabs, and Sunni Arabs, need to get in the game.”

Officials said a key focus would be finding ways to increase contributions from other nations outside the “core contributors” to the coalition effort. That could include sending trainers.

France was the first country to join U.S.-led air strikes in Iraq. Since the Paris attacks by Islamic State (IS) terrorists in November, President Francois Hollande has stepped up French aerial operations against IS, including in Syria. France currently conducts about 20 percent of the coalition airstrikes.

A French defense ministry official, speaking on condition of anonymity, said the coalition would discuss ways to broadly intensify the effort.”It’s not just about adding more planes, but also trainers to accelerate the speed with which local forces can retake territory from Daesh,” the official said, using an Arabic acronym used interchangeably with IS.

The French official said that while there was pressure to intensify the air effort, the U.S.-led coalition’s ability to ramp up strikes was limited by “extremely demanding” requirements to avoid civilian casualties. “It’s not about bombing haphazardly, but about giving a military impulse to the disorganization of Daesh’s command structure and to strip it of economic resources,” the official said.

Republicans have sought to portray Obama’s strategy to defeat Islamic State as flawed and insufficient, as the terrorists plot or inspire attacks far beyond their self-declared caliphate in Iraq and Syria.

Contrary to that, last week Carter offered U.S. troops heading to Iraq an upbeat assessment that emphasized advances by Iraqi forces (including the retaking of the city of Ramadi) and by U.S.-backed rebels in Syria. Carter emphasized coalition efforts to “collapse” the Islamic State’s power centers of al Raqqa, in Syria, and Mosul, in Iraq.