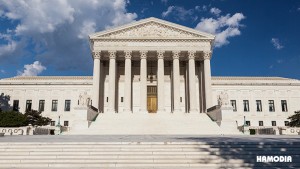 The Supreme Court restored death sentences Wednesday for three Kansas murderers by an 8-1 vote, undercutting predictions by some that a majority of the justices is ready to strike down capital punishment nationwide.

Speaking in court, Justice Antonin Scalia described the “notorious Wichita Massacre,” in which five people were shot. One young woman survived when a hair clip deflected a bullet, and she later testified against Reginald and Jonathan Carr. A jury convicted the pair of the four murders and sentenced them to death.

The Kansas Supreme Court reversed both death sentences as well as another for Sidney Gleason, a paroled inmate who participated in the robbing and killing of an elderly man over $35 and a box of cigarettes. Gleason then murdered two others who knew about that killing.

The state justices said the jurors may have been confused about whether they had to agree on a single reason for extending mercy to the killers.

State prosecutors appealed, and the justices with near unanimity reversed the state court’s judgments.

The jury in the first case heard “how these defendants tortured their victims, acts of almost inconceivable cruelty and depravity described firsthand by the lone survivor,” Scalia said. The jurors were “repeatedly told they could consider any mitigating factor,” he said.

“It is improper to vacate a death sentence based on pure speculation of fundamental unfairness,” Scalia continued. “Only the most extravagant speculation would lead to the conclusion that the supposedly prejudicial evidence renders the Carr brothers’ joint sentencing procedure fundamentally unfair.”

All the members of the court joined Scalia’s opinion in full, except Justice Sonia Sotomayor, who issued a partial dissent. She did not endorse the state court’s decision, but instead said the justices should have passed up the chance to review it.

“The standard adage teaches that hard cases make bad law,” she said. “I fear that these cases suggest a corollary: Shocking cases make too much law. Because I believe the court should not have granted certiorari here, I respectfully dissent.”

Last year, death penalty opponents were cheered when Justice Stephen Breyer, joined by Justice Ruth Bader Ginsburg, said the court should re-examine the constitutionality of capital punishment. He pointed to recent instances in which death row inmates were found to be innocent based on DNA tests.

But despite that opinion, a solid majority of the high court has continued to uphold death sentences when they are based on strong evidence.