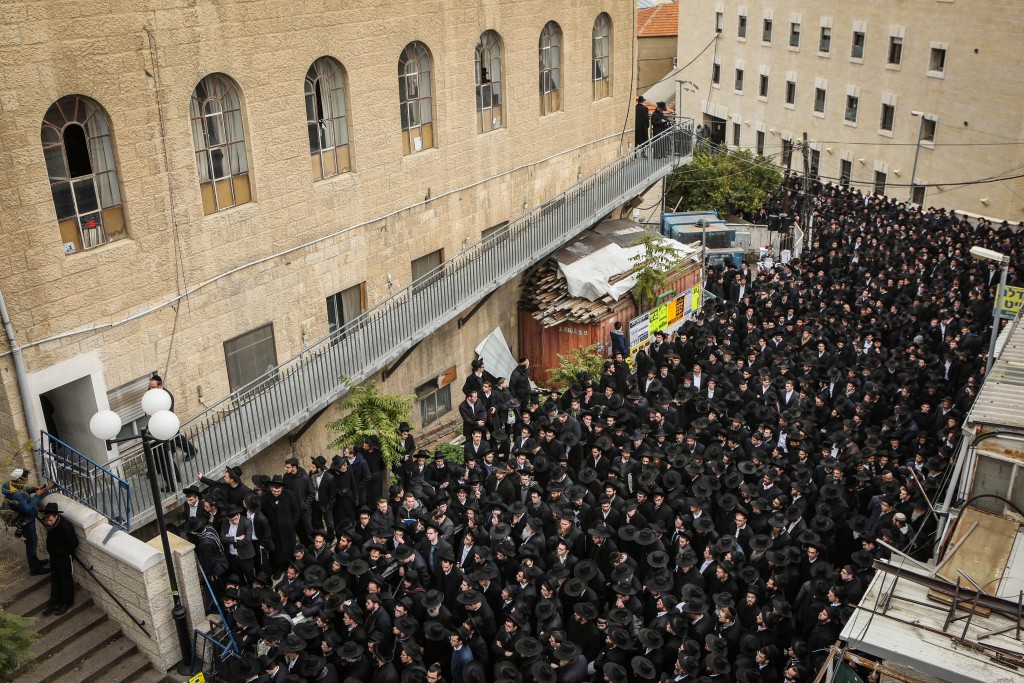 The Torah world was plunged into mourning upon hearing the news of the passing of one of the great Roshei Yeshivah and marbitzei Torah in our generation, Harav Rafael Halevi Shmuelevitz, zt”l, Rosh Yeshivah of Mir. The Rosh Yeshivah disseminated Torah to his talmidim for more than half a century, and passed away after a difficult illness at the age of 78.

Rav Rafael was born in 5698/1938 to Harav Chaim and Rebbetzin Miriam Shmuelevitz. His mother was the only daughter of Harav Eliezer Yehudah Finkel, zt”l, Rosh Yeshivas Mir, in the town of Mir, Poland, who was the son of Harav Nosson Tzvi Finkel, the Alter of Slabodka and the son-in-law of Harav Eliyahu Baruch Kamai. The sandak at his bris was his great-uncle, Harav Avraham Tzvi Kamai, Hy”d, the Rav of Mir.

On his father’s side, his grandfather was Harav Refael Alter Shmuelevitz, Rosh Yeshivah of Stutchin, and the son-in-law of Harav Yosef Yoizel Horowitz, the Alter of Novardok. He was raised in a home steeped in Torah and yiras Shamayim, in the path set by his illustrious forebears.

In 5696/1936, his father, Rav Chaim, was appointed to serve as Rosh Yeshivah in Mir, and during the war years, when the yeshivah traveled first to Japan and then to Shanghai, the Rosh Yeshivah went along, guiding the yeshivah skillfully and providing for all the physical and spiritual needs of the talmidim.

Rav Chaim related a wondrous story that happened during this period, at the wedding of his youngest daughter.

At the time, he secretly exchanged letters with Harav Avraham Kalmanowitz, of America, about sending money to Shanghai to support the yeshivah.

One day, Rav Chaim was summoned to the Japanese police station where they asked how 350 yeshivah bachurim under his supervision subsisted. He said that everyone knew that no one came out of the Japanese gendarmerie alive, and he became very afraid.

“I davened in my heart, ‘Ribbono shel Olam, if I am destined to perish here, I will go happily, but if I return alive, Father in Heaven, I ask of You three things. First, when I emerge from this gehinnom, absolve me of the financial burden; second, that I should merit to marry my daughters off to talmidei chachamim, and third, that I merit to raise sons who are talmidei chachamim.’

“Rabbosai, I had the merit to ask because when a person is gripped with the fear of death, he is allowed to ask. Although ultimately I emerged from there, I cannot relate what happened on the third floor of that building… But I returned and two of my tefillos have already been fulfilled. I am free of the financial burden and my third daughter is marrying a talmid chacham today. The third tefillah will yet be fulfilled…”

Once the war was over, the entire yeshivah emigrated to America or other locales. Only after everyone was on safe shores did Rav Chaim embark on a journey to Eretz Yisrael with his two children.

First he went to America, where he spent a few months with his students. Although he was asked to serve as Rosh Yeshivah in America, he yearned to go to Eretz Yisrael and to learn peacefully alongside his father-in-law in Yerushalayim. Indeed, after a short time, he was able to fulfill this dream.

When they reached Eretz Yisrael, Rav Rafael was nine years old. He attended Talmud Torah Yavneh, and later Yeshivas Tiferes Tzvi. Even before his bar mitzvah, he learned in Yeshivas Mir alongside his father, the Rosh Yeshivah. Everyone knew that he was brilliant and blessed with many talents, among them his remarkable diligence. Already as a young bachur he learned with his father b’chavrusa every day, and on Shabbos, his grandfather, Harav Eliezer Yehudah Finkel, would test him. Thus, even before his marriage, he studied most masechtos in Shas in depth. The daily chavrusa with his father continued until the latter’s passing.

As a young man, he would have to present to his grandfather with two profound explanations on various sugyos each week. Likewise, his father would buy him a new sefer by an Acharon each month for him to study.

On Tu BiShvat 5722/1962, Reb Rafael became engaged to the daughter of Harav Avraham Yehudah Farbstein, zt”l, Rosh Yeshivas Chevron and a member of the Moetzes Gedolei HaTorah. The shidduch came about when, by recommendation of his grandfather Harav Finkel, Reb Rafael would deliver a chaburah each week for half a year to Harav Yechezkel Sarna, zt”l. Ultimately, Rav Sarna noted to his daughter, Rebbetzin Farbstein, “Aza Refael nisht dah — such a Raphael is nowhere else to be found.”

While still a young bachur, his divrei Torah were published in various journals, and Harav Yechezkel Abramsky, zt”l, who saw them, remarked that there was a future for the Torah world.

Disseminator of Torah to the Masses

A significant facet of Rav Rafael’s life was his dissemination of Torah. Some two years after his marriage, at the age of 27, he was asked to serve as a Maggid Shiur in Yeshivas Knesses Yisrael Chevron. His breadth of knowledge far exceeded his young years, and his shiurim and chiddushei Torah became renowned for their brilliance and clarity. Many in Yeshivas Chevron at the time maintained that he was their rebbi muvhak until his final day. At the same time, he also served as a R”M in Yeshivas Kol Yaakov.

Aside from his tremendous depth, Rav Rafael was known for his proficiency in all areas of Torah, and his shiurim covered some of the most complex sugyos in Shas.

On Zos Chanukah 5739/1978, Harav Chaim Shmuelevitz passed away and Rav Rafael was asked to take his father’s place as Rosh Yeshivah, a position he kept until his final days. Hundreds of talmidim who came to the yeshivah from abroad streamed to listen to his shiurim. Ultimately, many of his talmidim became marbitzei Torah in their own right.

During those years he worked to publish his father’s divrei Torah. At the same time, Sichos Mussar was published, written largely by Rav Rafael and ybl”c Harav Aryeh Finkel, shlita, which was a compilation of Rav Chaim’s shmuessen. Later, he worked with his brothers to publish sifrei Shaarei Chaim on Shas.

This past year, Rav Raphael’s sons published the first sefer, Shiurei Rabi Raphael on Maseches Kiddushin, which has become widely studied in yeshivos around the world.

Perfection in the Three Pillars of the World

In addition to his erudition in Torah, Rav Rafael was known for his tremendous wisdom. His talmidim would consult him regularly on all matters in their lives, and his unique advice, as well as his genuine concern for them, brought talmid and rebbi very close. He was extremely devoted to his talmidim, and every trouble that they encountered pained him.

He was known for his generous heart, like his father, and whenever he spoke of other people’s tzaros, tears would form in his eyes, even when he was speaking of people he did not know personally.

He was also exceptional in the middah of anivus. He did not “hold of himself” at all, and did not deem it below him to perform even the most mundane tasks when necessary. He would walk in the streets simply, like everyone else. He refused to sit on the Mizrach wall in the yeshivah, and when people sought to accord him honor, he never understood why they wanted to.

The Roshei Yeshivah, zt”l, shared a wonderful relationship. The talmidim at the yeshivah would marvel at the mutual respect they accorded one another, which was manifested countless times. Over the years they would sit in on each other’s shiurim.

The talmidim in the yeshivah in Modiin Illit remember longingly the Shabbosos he spent at the yeshivah, during which he would deliver several chaburos and shiurim. He was their role model in learning Torah with great enthusiasm and diligence.

He was also very careful to utilize every minute of time, and would often remark, regarding various chumros: “We are machmir about bitul Torah!”

A Sefer Torah in Pain

In recent years, Rav Rafael suffered from a degenerative disease. Despite his extensive suffering, he did not desist from his diligence. As he had moved to be near the yeshivah, he continued to daven and deliver his shiurim with great mesirus nefesh. Superhuman strengths emerged as he struggled to devote himself to his beloved Torah, and that gave him the endurance to withstand his suffering.

In recent days his condition took a turn for the worse and he was hospitalized. On Monday evening he passed away.

The levayah then proceeded to Har Hamenuchos, where Harav Rafael was buried next to his illustrious father, Hagaon Harav Chaim Shmuelevitz, zt”l.

He is survived by tbl”c his chashuve almanah, Rebbetzin Edna, tlit”a; his brothers, Rav Avraham and Rav Meir; his sisters, the wives of Rav Yitzchak Ezrachi and Rav Yisrael Meir Weiss; his sons, Rav Yaakov, who took his father’s place at Yeshivas Mir in recent years; Rav Eliezer Yehudah, shlita, a marbitz Torah in Mosdos Yad Mordechai near Paris; Rav Yechezkel and Rav Ben Tzion Yosef, eminent talmidim at the Mir; Rav Nosson Tzvi, one of the Rabbanim in Yeshivas Nesivos Chochmah; and his daughters, Rebbetzin Sarah Segal, from Mir-Brachfeld; Rebbetzin Malka Shapiro; Rebbetzin Efrat Piness; and Rebbetzin Etty Wolf; grandchildren, great grandchildren and many talmidim all over the world.