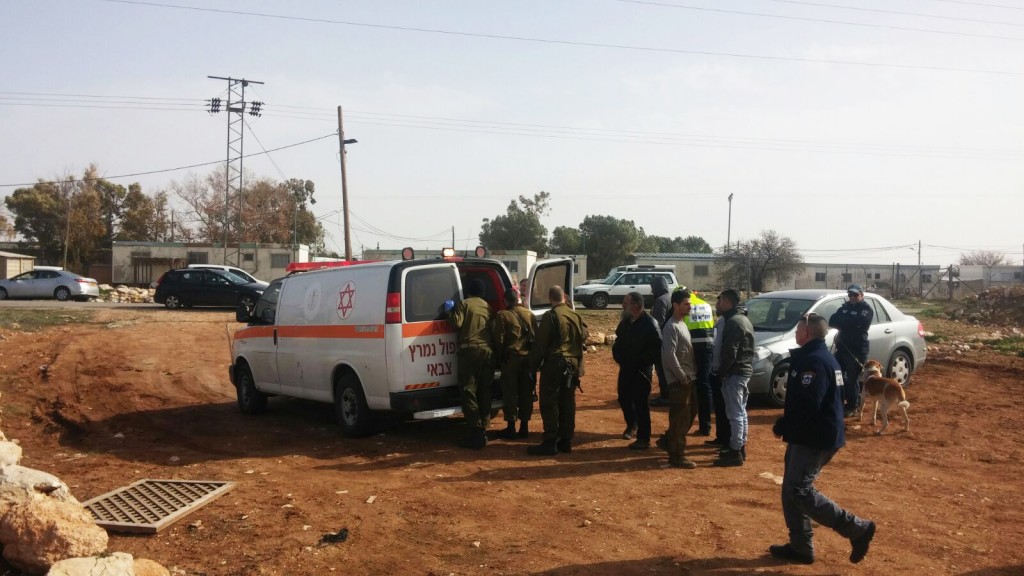 An Israeli woman was moderately to seriously wounded in a stabbing terror attack in the town of Teko’a in Gush Etzion Monday morning. The woman, about 30, was treated at the scene by first responders before being taken to the Shaare Zedek hospital in Yerushalayim for further treatment. In Shaare Zedek, her condition was stabilized and it was graded as moderate.

The victim was an expectant mother. Security officials believe she may have been targeted because of that fact.

The incident occurred at a warehouse in the town’s industrial zone. The terrorist stabbed the victim and began to run away, but was quickly targeted and eliminated by security forces. It is not clear if the terrorist was an employee at the warehouse.

The terrorist stabber was killed by security forces.

Following the latest attacks, the Etzion Brigade Commander has ordered all Palestinian workers to leave the Jewish settlements in the Etzion Bloc.

The stabbing took place as the funeral procession for Daphna Meir, Hy”d, left the town of Otniel in the southern Chevron Hills for  Har Hamenuchos in Yerushalayim, where she is to be interred. Security forces were still searching for Meir’s killer. Residents of Otniel were under lockdown for hours Sunday night, because security officials feared that he was still in the town. Only later in the evening was it determined that the terrorist had left the town. IDF soldiers searched Arab villages in the region throughout the night for the terrorist, so far unsuccessfully.

The injured lady was identified as Michal Froman, the daughter-in-law of the late Rabbi Menachem Froman. Rabbi Froman, a resident of Teko’a, was known for his efforts to promote coexistence among Arabs and Jews, and sponsored numerous programs in the region to bring about a meeting of the minds between political and religious leaders.

The public was asked to daven for the complete recovery of Michal bas Esther.

At a meeting Monday morning with Indian Minister of External Affairs Sushma Swaraj, Prime Minister Binyamin Netanyahu said that “detestable terrorists murdered Dafna Meir yesterday. She was raising six children with her husband. I wish to send my condolences to the family and to strengthen the residents of Otniel. We will find this terrorist and he will pay the price for his actions.”