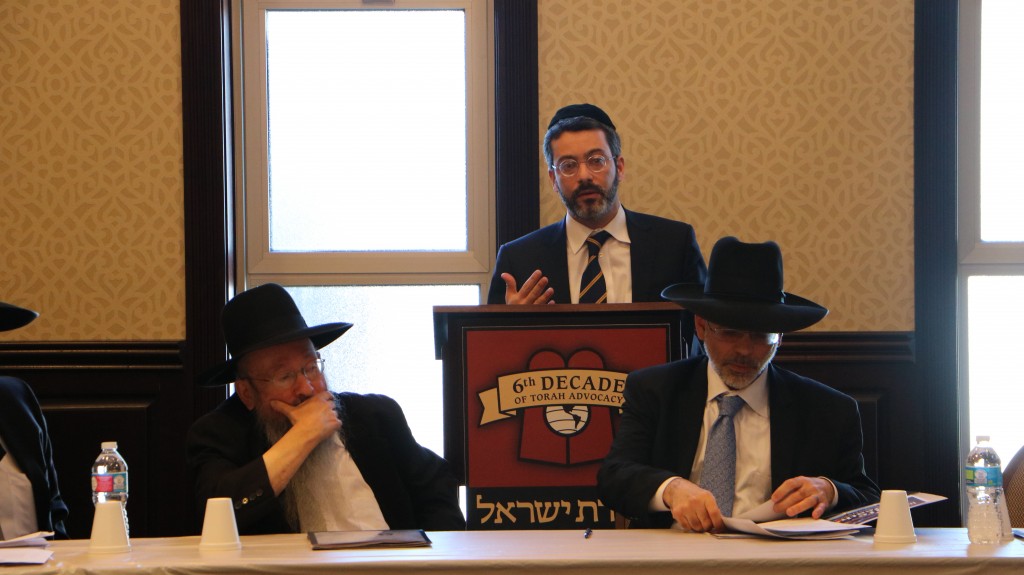 On Tuesday, January 12, Agudath Israel of Illinois hosted a meeting for all Chicago-area Rabbanim in an effort to launch a local division of Chayim Aruchim, Agudath Israel’s Center for Culturally Sensitive Health Advocacy and Counseling. The meeting, which was organized by Rabbi Yaakov Robinson, executive director of the Midwest Agudas Yisroel Council of Synagogue Rabbanim, and Rabbi Yitzchok Bider, executive director of Agudath Israel of Illinois, had more than 30 Rabbanim attending from across the community spectrum in a wonderful display of achdus.

Over the years a dramatic shift has taken place in the ethos and practice of medicine and health care. These changes in values and policies have presented new challenges to Torah-observant patients and their families, requiring intervention and guidance in the halachic, medical, and legal realms. Addressing these issues properly can often mean the difference between life and death. Chayim Aruchim, a project of
Agudath Israel of America, was created to identify and address these problems. While their efforts have produced remarkable results, the overwhelming majority of their work has been focused on the East Coast.

Rabbi Yaakov Robinson, who chaired the event, delivered opening remarks before introducing the keynote speaker, Rabbi Eliezer Gewirtzman, senior member and posek for Chayim Aruchim, who flew in for the occasion. Rabbi Gewirtzman gave a comprehensive and detailed overview of the evolving challenges and common situations that are mishandled or neglected. He shared approaches and potential solutions that have already been successfully employed.

He pointed out various instances where a Rav should carefully observe and discern whether a patient is receiving proper care, how to determine a she’eilah, and the most common problems that arise with elderly, patients afflicted with dementia, and terminal patients.

When the physicians or hospitals are resistant to accommodate, one must know how to challenge the establishment, and when to facilitate a transfer to a different kind of facility instead of insisting on accommodation. He used personal and moving anecdotes to illustrate how lives have been prolonged and even saved through utilizing certain approaches, resources, and services.

Following Rabbi Gewirtzman, Harav Shmuel Fuerst, Dayan of Agudath Israel of Illinois, shared from his vast experience in dealing with these issues in the Chicago area, describing the distinct difficulties and how they are most effectively dealt with.

Being in direct contact and developing a relationship with the primary attending physician is often a critical component. Asserting that the patient’s religious wishes are to be respected is often effective in achieving cooperation. Rav Fuerst decried the normative practices in hospice and palliative care for terminal patients and lamented the lack of available halachically-compliant hospice care.

Next to address the assembled was Rabbi Yona Reiss, Av Beis Din of the Chicago Rabbinical Council, who began with saying that, as is alluded to in Birkas HaChodesh, we can only have chayim shel shalom, chayim shel brachah, etc., if we are first zocheh to chayim aruchim. He expressed how every moment of life is of infinite value and also related from personal experience how far apart the current medical establishment’s values and policies are from the Torah’s approach and how that has had an impact on us. Both Rabbanim strongly emphasized the critical importance of this initiative.

The crowd was visibly moved by a powerful video, appropriately titled “I Want to Live,” produced by Chayim Aruchim.

Before the final question-and-answer segment, Rabbi Shlomo Soroka shared recent legislative developments regarding treatment of the terminally ill and emphasized the importance of being familiar with federal and state law regarding patient rights. He strongly encouraged taking advantage of Agudath Israel’s Halachic Medical Directive for Illinios, clarified which resources are currently available and which are still in the developmental stages. In addition to the legal services of Agudath Israel, a taskforce of attorneys licensed to practice in Illinois is being formed. These attorneys, who specialize in elder law, medical malpractice, and estate planning, will be a valuable resource in aiding the community.

An unanticipated remarkable development occurred immediately following the conclusion of the meeting. One of the participants, heeding the call of Rav Fuerst, contacted a local community member in the health care and hospice industry, requesting if accommodations could be made for a halachic hospice. The response was in the affirmative and discussions are already underway for establishing such a facility in the community.

Other local chessed organizations that deal with aiding the ill, including Chicago Hatzalah, the Refoenu division of the Chicago Center for Torah & Chesed, and the Chicago Mitzvah Campaign, have been active collaborating partners in this initiative and participated in the meeting.

“The launch of the Illinois division of Chayim Aruchim was the result of collaboration between the many local organizations,” said Rabbi Soroka. “This collaboration will hopefully continue as we work together on this and other projects that will benefit the greater Chicago Jewish community.”