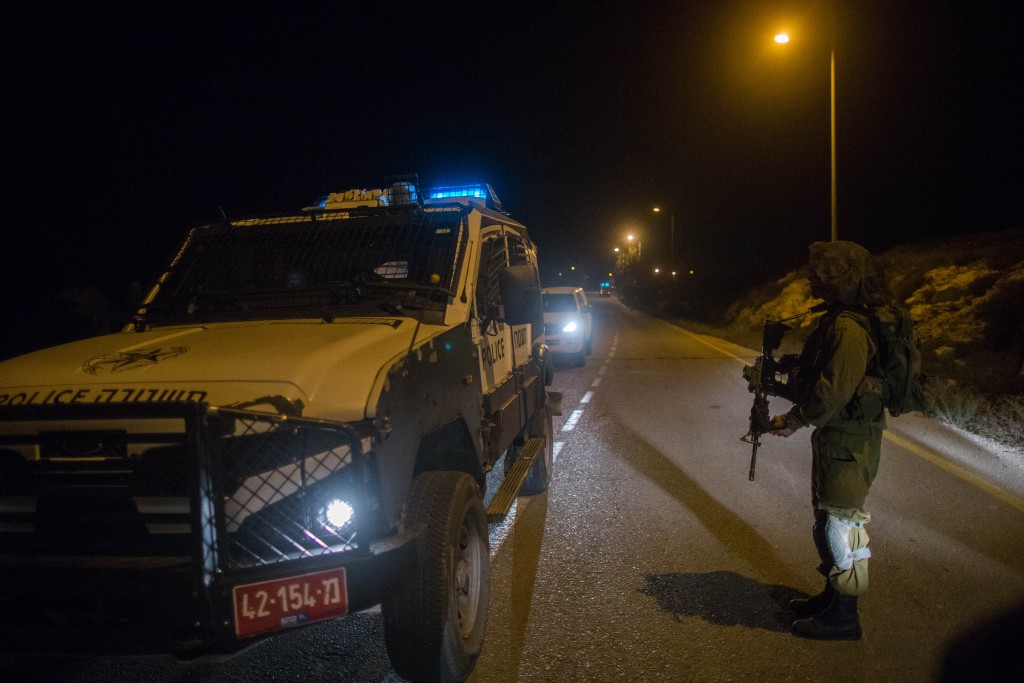 Dafna Meir, Hy”d, killed in front of her children; Terrorist still at large

A Jewish woman was stabbed to death by a Palestinian terrorist in front of three of her children at her home in Otniel, south of Chevron, on Sunday evening.

Dafna Meir Hy”d, 39, was the mother of six children, and worked as a nurse in the Soroka Medical Center in Be’er Sheva. She was the 28th Israeli to be killed in the wave of Palestinian terror attacks that began after the chagim.

According to an initial report, the terrorist entered Otniel, made his way to the Meir home, and murdered her before fleeing the scene, apparently with the help of others. It would be the first time during the current violence that a terrorist has carried out such an attack in a Jewish home.

There were signs of a struggle indicating that Mrs. Meir stubbornly fought the terrorist, during the course of which she sustained numerous wounds, in order to keep him from her children.

A manhunt involving large numbers of IDF soldiers was launched with roadblocks and searches being carried out in the surrounding area. Flares were being used to illuminate the area as well.

Yochai Demari, the South Chevron Hills Council head, arrived at the scene and stated that she “fought with all her might to save the three children who were with her when the terrorist entered the house.

“Anyone who thinks that we will run away, that we will be afraid, will discover exactly the opposite. We will continue to build, and build, and that will be our answer to the terror.”

Police said they were checking whether the attacker worked in Otniel, and whether the victim prevented him from entering the home, blocking his path at the entrance.

While the killer’s whereabouts were not yet known, local residents were instructed to stay in their homes and lock their doors and windows.

“I want to give strength to all the children of the family. All of us are hurting and share in the painful grief. We will find the terrorist, and he will pay the full price for this heinous murder,” Prime Minister Binyamin Netanyahu said.

President Reuven Rivlin called Damari and said, “This is a horrific tragedy, and I am with you with all of my heart. This is shocking and terrible. At this time of grief, disbelief, and pain, I am sure you are focused on doing all that is needed in order to help the family and all the residents of the community.”

A senior MDA paramedic, Noam Bar, who arrived at the scene, told reporters: “We saw a woman aged around 30 who was unconscious, with no breath or pulse. She suffered from stab wounds to her upper body. We attempted to resuscitate her for a lengthy amount of time, at the end of which, we were forced to pronounce her dead,” he said.

A second MDA paramedic, Haim Rubin, who lives in Otniel, described a heartbreaking scene in which the response team had to move the woman’s children to another room as they attempted to save their mother’s life.

The levayah was scheduled for Monday morning, starting in Otniel at 9 a.m., and proceeding to Yerushalayim for burial at 11 a.m. at Har Hamenuchos Cemetery.

It was not the first time Otniel has suffered such grief in the current wave of terror. In mid-November, Rabbi Yaakov Litman, Hy”d, and his son Netanel, Hy”d, were murdered in a shooting attack near Otniel, with several other family members in the car with them wounded.

Updated Sunday, January 17, 2016 at 6:37 pm With Details on the Ongoing Investigation, Search for the Terrorist That Fled and the Levaya