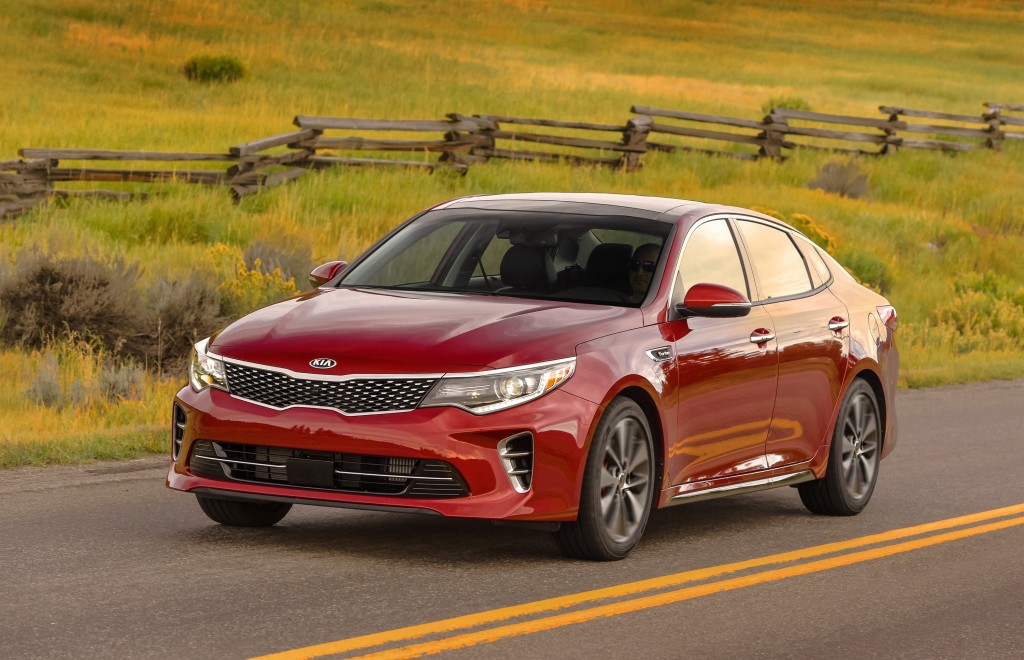 Kia has come a long way in the U.S. since its budget car days of the mid-’90s. The South Korean automaker is now known for value-loaded vehicles that offer exceptional warranties and enough style to never feel budget-focused.

The Optima midsize sedan epitomizes these traits. The redesigned 2016 model starts at just under $22,000, but in an attempt to prove Kia can swing upscale, the automaker lent us a top-of-the-line Optima SX Limited ($35,790 excluding delivery).

It’s only a couple hundred dollars more expensive than last year’s top Optima, but that whopping 63 percent markup over the base model really unbalances the value proposition. For Kia’s best-selling model, the loaded price point — same as a base model Audi A4 or BMW 3-Series — stands out more than its performance. But the German cars are superior, even without Kia’s kitchen sink.

The Optima has grown. It’s an inch wider, about half-an-inch longer and taller than the outgoing model, and comes with the same spunky, direct injection 2.0-liter turbo four-cylinder engine as last year. Fuel efficiency tuning drops the motor’s horsepower from 274 to 245. But the turbocharger makes all 260 pound-feet of torque available very early in the power band, so full power is easily accessible. You’ll never need to hesitate during a power merge.

The Optima’s fuel economy gain, from 20 to 22 mpg in the city, offsets the loss in horsepower.

The six-speed automatic transmission, with minuscule paddle shifters that felt kind of silly, comes with three drive modes: eco, normal and sport. We averaged 29 mpg combined at 42 mph in eco mode, 2 mpg better than in sport mode, and 4 mpg better than the Environmental Protection Agency estimate of 25 mpg combined. In sport mode, the throttle pedal has a quicker response and the transmission shifts later, so the engine revs are more noticeable than the other, quieter modes.

Kia’s new Optima handles well, and doesn’t have much body roll in turns. The flat-bottomed sport steering wheel feels good and helps connect the driver to the road with predictability.

The biggest difference of the SX LTD compared with other trim levels is on the inside. Kia emphasized a lot of sound-deadening qualities in the redesign that keep the cabin quiet; with the windows down at idle you’ll hear the engine puttering. It’s also more spacious and family friendly than similarly priced sedans, with no kicking on the seat backs, nor any climate complaints since the rear has its own climate control.

The blacked-out interior uses soft-touch dash material instead of hard plastic panels, giving it a supple, upscale feel. The dash is as sleek as the diamond-patterned black nappa leather seats, which, at this price point, are heated and ventilated.

The horizontal design of the dash and center stack is simple and uncluttered.

The redundant steering wheel controls feature buttons and a center volume and tuning toggle that doubles as a button to change modes. It’s an efficient setup but confusing at first. Those controls, along with the traditional buttons and knobs on the center console mean the driver and passenger don’t need to interact much with the narrow, 8-inch touch screen. Overall the UVO infotainment system is easy to use, though the voice commands understood us less than half the time.

Audio fidelity is a bit more impressive, as this Optima trim line comes with a Harman Kardon sound system.

Kia and sibling brand Hyundai offer one of the coolest panoramic sunroofs on the market; it opens over the front seats but extends into a moonroof for rear passengers, so everyone gets to see the sky.

The load of tech and safety features will be the dealmaker for shoppers intent on having such things in the car they purchase. The adaptive cruise control works wonderfully. The lane departure warning system can be adjusted in the settings to be quieter, while the front collision warning was too sensitive for our liking. And the blind spot detection, rear cross traffic and rear parking assist made it feel as if the whole family was backing us out of the driveway. It was a bit much.

The biggest issue with this trim is not what Kia is offering, but what every other automaker is offering in a similar range. It makes it easy to look elsewhere.

Parting shot: The competition at this price point is too great.