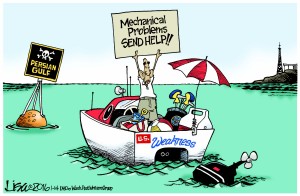 It will be a long time before the Americans forget those scenes. And that is exactly what the Iranians wanted to accomplish. To capture 10 American sailors whose ship lost power in the Persian Gulf and the winds pulled them to Iranian territorial waters. There, they were arrested, brought to their knees and made to put their hands over their heads. A classic picture of captives being humiliated at the hands of the victors.

From the beginning it was clear that it would be a short captivity. A day, maybe two days, no more than that. Because the Iranians cannot at this time enter into a confrontation with the Americans, who are their benefactors, and when the hope for lifting of the sanctions had finally been realized.

At a time like this, you don’t turn the capture of a few sailors into a big issue. It was clear that they would be brought ashore, photographed, questioned a bit and in less than 24 hours would be released.

For senior American officials, this was an irrefutable demonstration of the importance of the diplomatic reset with Iran.

But today, after the Americans saved the Iranians, who had been forced into a most uncomfortable corner, and returned them to the international community, they could not treat the Americans any other way, and received public praise for it from the U.S. Secretary of State.

The Revolutionary Guard were somewhat harsher, and their spokesman said that the American servicemen were arrested, interrogated and only after it was clarified that they had not intended to conduct operations in Iranian territory, was it decided to let them go.

And that, he said, was only after each of the 10 sailors had apologized, and the American government had also expressed regret over the incident. Just what extent the connections between the Americans and Iranians have become close can be gauged from the fact that during the duration of the short crisis, Secretary of State John Kerry and his counterpart Mohammad Javad Zarif were in constant touch. They spoke at least seven times in seven hours to arrange the release of the sailors.

But for the citizens of the United States, the images that the Iranians publicized left a bad taste. Many of them found it hard to forget them, showing the humiliation of American servicemen.

“To see sailors of the American Navy reduced to their knees, trembling with fear, is not a small matter,” said one senior American official, expressing what many others felt.

In the longer term, perhaps they will understand in the U.S., that despite all Washington has done for them in the past few years, that radical Jihad has essentially not changed. It has remained the same. Hostile to the West in general, and to the U.S. in particular.

And this is what the senior American officials are not ready to understand or internalize, and that we have witnessed in the last 24 hours: the unconcealed expressions of joy after the U.N. published its report on the Iranian nuclear program that was immediately translated as an “Iranian surrender,” an acceptance of all the demands of the Western powers — and at the same time the announcement of the removal of sanctions.

And they were removed very quickly. Even before they were removed, President Barack Obama authorized the sale of giant civilian cargo planes to Iran. That signaled to everyone else that they could sell whatever they like to Iran.

Yes, the sanctions are removed, and now the terror will follow. There is no doubt that terror will flourish in the Middle East, at Iran’s direction. Iran, which has never stopped denying the Holocaust, and even after the signing of the nuclear deal continued to call for the destruction of Israel.

Not only Israel, but the entire Middle East, is frightened by America’s conduct. Disappointed in Washington, that has opened the gates to Iran of billions of dollars, which will be used to finance terror operations.

No wonder that with the publication of the U.N. report, members of Hizbullah went out to dance in the streets of Beirut. And in Gaza they were shooting in the air in celebration. For now the money that could come will come.

Have the Americans effected, even slightly, a change in Iran? In its lack of democracy? Its treatment of women? Its repression of minority religions within its borders? Violations of human rights? Nothing!

This article appeared in print on page 9 of the January 18th, 2016 edition of Hamodia.