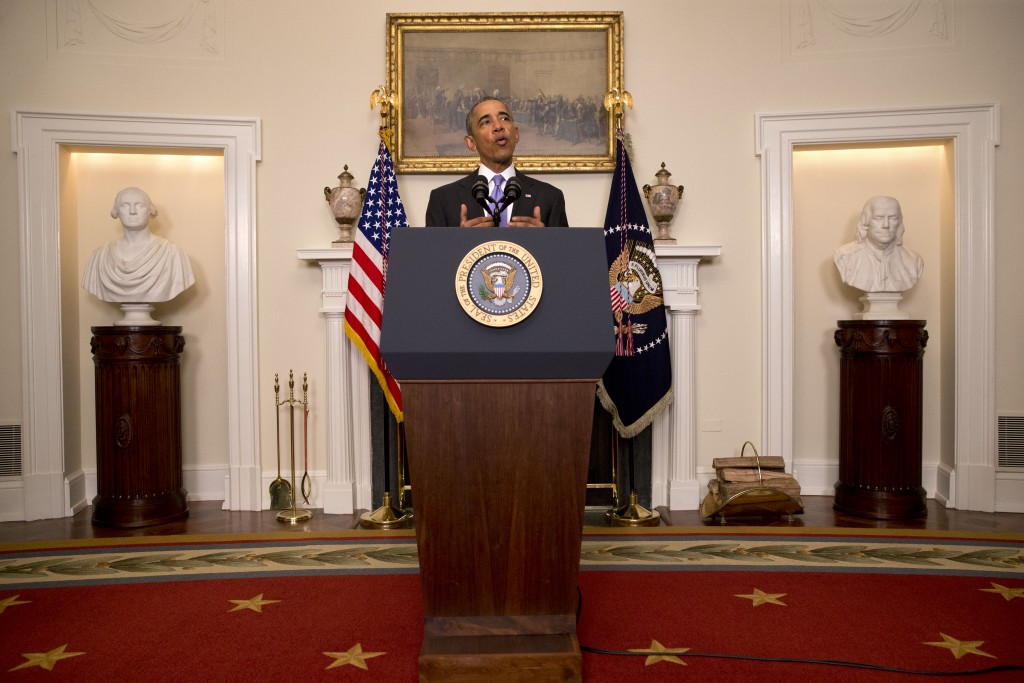 President Barack Obama on Sunday heralded the release of Americans held prisoner in Iran and the full implementation of a historic nuclear accord with the Islamic Republic, holding both up as a victory for “smart” diplomacy and fulfillment of his pledge to deal directly with enemies of the United States.

“This is a good day,” Obama said in a statement from the White House. “When Americans are freed and returned to their families, that’s something we can all celebrate.”

The president spoke at the close of an eventful weekend that saw back-to-back the release of five imprisoned Americans and the termination of billions in international sanctions on Iran as part of the nuclear accord.

Yet underscoring the strain that continues to exist between the U.S. and Iran, the Obama administration also announced new penalties Sunday on 11 individuals and entities involved in Tehran’s ballistic missile program.

“We will continue to enforce these sanctions vigorously,” Obama said. “We are going to remain vigilant about it.”

For Obama, the diplomatic breakthroughs are a validation of his early promise to deal directly with nations such as Iran, one that his political opponents continue to staunchly oppose. The U.S. and Iran broke off diplomatic relations after the 1979 hostage-taking at the U.S. Embassy in Tehran.

“America can do – and has done – big things when we work together,” Obama said. “We can lead this world and make it safer and more secure.”

The nuclear talks have brought a sense of normality to relations between the U.S. and Iran, with top officials from each country in somewhat regular communication. While Obama emphasized that the U.S. continues to have deep concerns about Iran’s destabilizing actions in the Middle East and its threats to Israel, he also opened up the prospect of Tehran working more cooperatively with the rest of the world.

The president spoke shortly after the Americans began their journey home. A Swiss air force plane left Tehran with several of the freed Americans on board; the precise number was unclear. The plane later landed in Geneva, from where it will continue on to a U.S. air base in Germany.

White House officials said negotiations took place over a 14-month period, most of them held in Switzerland, and they were driven by concerns that the Americans potentially faced many years in prison.

Iran also agreed to work to locate American Robert Levinson, who vanished during a trip to Iran in 2007.

In a reciprocal move, Obama said that six Iranian-Americans and one Iranian serving sentences or awaiting trial were being granted clemency. He emphasized that they were not charged with terrorism or any violent offenses.

“They’re civilians, and their release is a one-time gesture to Iran given the unique opportunity offered by this moment and the larger circumstances at play,” Obama said.

Within hours of the release of the Americans, the U.S. imposed sanctions against those involved in Iran’s ballistic missile program as a result of Tehran’s firing of a medium-range ballistic missile.

U.N. experts said in a report in December that the missile test in October violated sanctions banning Iran from launches capable of delivering nuclear weapons.

In another development Sunday, Obama announced that the U.S. and Iran had settled a long-standing financial dispute over $400 million in Iranian money that dates back more than three decades. Iran also got $1.3 billion in interest, which Obama said was much less than it had sought. Administration officials said the U.S. faced the prospect of having to pay billions of dollars more if the case had continued.