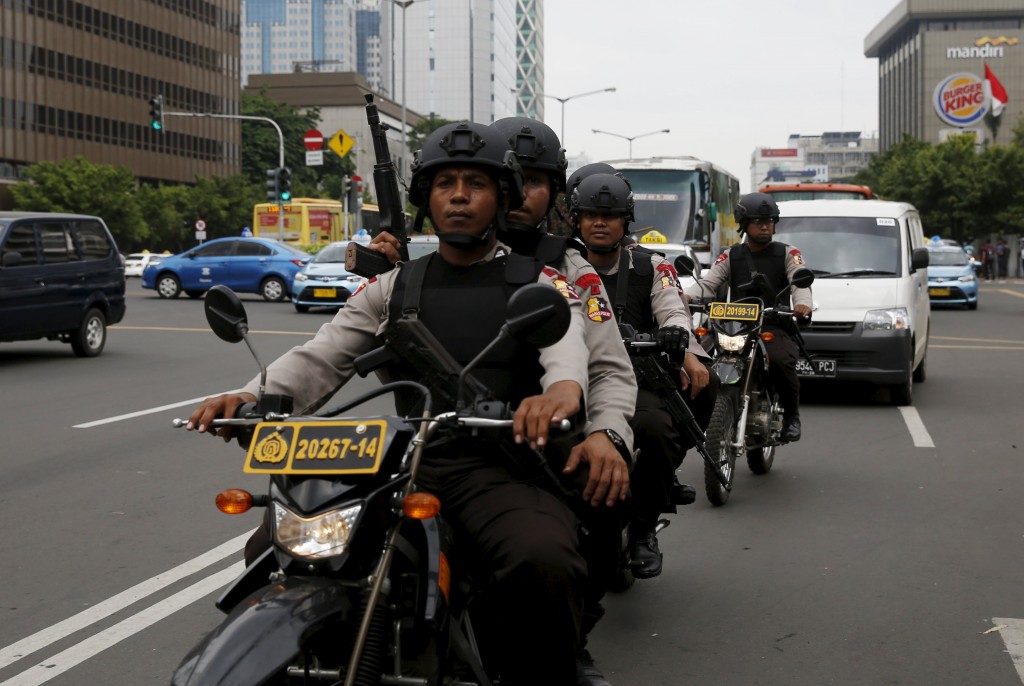 Indonesian police on Friday arrested three men on suspicion of links to the brazen terror attacks in the heart of the country’s capital, and said they recovered a flag of the Islamic State group from the home of one of the terrorists.

The discovery of the flag bolsters authorities’ claim that the attack Thursday was carried out by the Islamic State group, which controls territory in Syria and Iraq and whose ambition to create an Islamic caliphate has attracted 30,000 foreign terrorists from around the world, including a few hundred Indonesians and Malaysians.

The arrests of the three took place at dawn at their homes in Depok on the outskirts of Jakarta, police said in a message, citing Col. Khrisna Murti, director of criminal investigations who led the raid. It said they were arrested for suspected links to the attackers. Local media broadcasted footage of the handcuffed men being escorted by police.

National police spokesman Maj. Gen. Anton Charliyan told reporters a black IS flag was found in the home of one of the terrorists and police believe they have established their identities. He says two of the five men were previously convicted and imprisoned for terrorism offenses.

The IS link, if proved, poses a grave challenge to Indonesian security forces because until now the group was known only to have sympathizers, with no active cells capable of planning and carrying out such an attack.

In recent years Indonesian anti-terror forces had successfully stamped out another terror group known as Jemaah Islamiyah. It was responsible for several attacks in Indonesia, including the 2002 bombings in Bali, which left 202 people dead, as well as two hotel bombings in Jakarta in 2009 that killed seven people.

Terrorism experts say IS supporters in Indonesia are drawn from the remnants of Jemaah Islamiyah.

A few hundred Indonesians are known to have traveled to Syria to join the IS. Few have come back. Still, police believe that an Indonesian IS terrorist, Bahrum Naim, who is in Syria, may have inspired and instigated the Jakarta attack.

Taufik Andri, a terrorist analyst, said although the attack ended swiftly and badly for the attackers, their aim was to show their presence and ability.

“Their main aim was just to give impression that ISIS’ supporters here are able to do what was done in Paris. It was just a Paris-inspired attack without being well prepared,” he told The Associated Press. Those attacks killed 130 people in November.